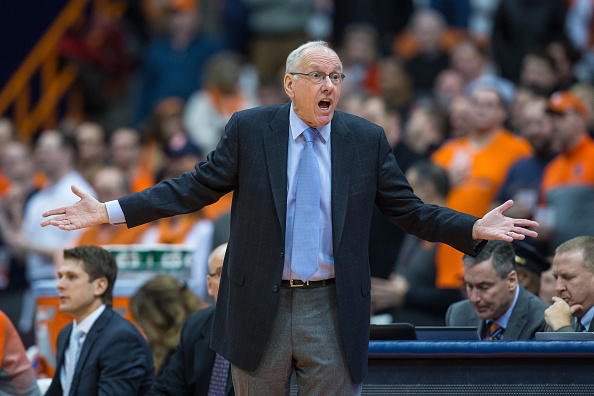 In 2015, the NCAA handed down a series of penalties to Syracuse University following a multi-year investigation into the basketball program. After the NCAA found that, in their words, men’s basketball coach Jim Boeheim failed to promote compliance of NCAA rules within his program for eight years, they ordered 108 men’s basketball wins between 2004 and 2012 be vacated. They reduced the number of scholarships the school could offer between the 2015–16 and 2018–19 seasons from 12 to eight. They also suspended Boeheim for nine ACC games.

On top of this, Syracuse self-imposed a one-year postseason ban for the 2014-2015 basketball season and the school voluntarily vacated 24 men’s basketball wins (15 from 2004–05, nine from 2011–12). Along with the announcement, the school also announced that Boeheim, the longtime head coach of the program, would step down in three years. 12 days later it was announced that athletic director Daryl Gross would be stepping down from that role but would continue to work with the university in a new role.

On paper, the damage was done and the effect was clear. Deserving or not, Syracuse crossed a line against the NCAA and the organization decided to make an example out of the school and its basketball program.

Syracuse appealed the decision to the NCAA and, in November of 2015, won back one of those lost yearly scholarships.

In December, Boeheim appealed his suspension and although the nine games were upheld, he was able to start in before ACC play, getting it done sooner than originally anticipated and against an arguably easier slate of opponents.

Thursday, Chris Carlson of Syracuse.com reported on the discovery that while Gross did step down as the head of the athletic department, his seemingly made-up new role came with a cushy three-year, $1.5 million deal. And when Gross left Syracuse in 2016 to take the AD job at California State University-Los Angeles, Syracuse paid him $675,000 to offset the salary he would be giving up with the new job at a smaller school.

So in the end, here’s what the NCAA’s punishment actually looked like:

Vacated wins are essentially meaningless. Boeheim’s suspension was a blip on the radar and his employment was never in doubt. Gross benefitted immensely in spite of being in charge during the violations. In spite of the scholarship reductions, the program went to the Final Four in 2016, effectively rendering it a null issue.

In other words, for the most part, the only people who were actually punished in any meaningful way were a group of student-athletes who were uninvolved in any of the allegations or violations in any way.

How does that make any sense?

There are a whole lot of adults involved in this scenario who are supposed to be responsible for the well-being of the teenagers who actually play the sport that generates the money that pays their salaries. From the NCAA to Syracuse University to Syracuse Athletics. And yet none of them bore much burden for whatever “crimes” were committed. The NCAA might have scored an early victory for bringing down a hammer but it was actually a toy hammer, making plenty of noise but lacking any force to do anything. As for Syracuse University, it looks as though the school put its efforts into protecting Gross and Boeheim rather than trying to protect the student-athletes who took the most tangible hit.

This is nothing new, of course. Tales of the toothless NCAA and a university protecting it’s “moneymakers” over its actual moneymakers is par for the course. It’s simply a reminder that this is a broken system. That no matter what anyone tells you about the benefits student-athletes receive, they will always be the first ones to feel the brunt when things go south while the adults in the room scatter for cover. They’re banking on the fact that those athletes will be gone soon enough and, hopefully, earning so much money that they don’t look back in anger. It’s worked well for them so far.