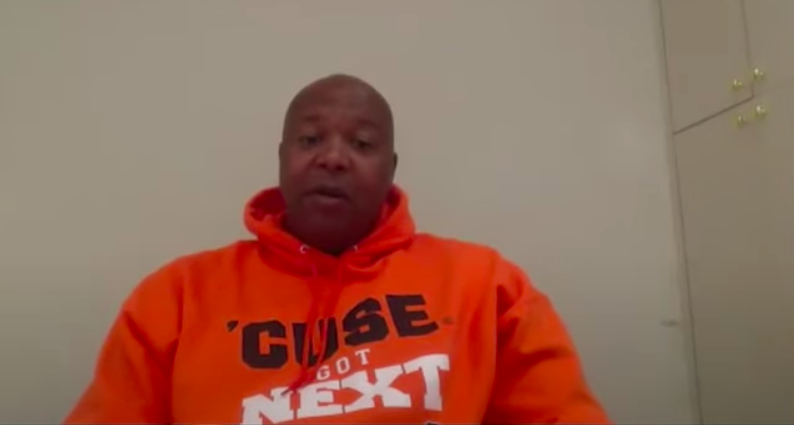 Derrick Coleman was a star for the Syracuse basketball team between 1986 and 1990, leaving behind a legacy that includes being named a consensus first-team All-American, Big East Player of the Year in 1990, and a first-team All-Best East player three times. He remains second in career points, first in rebounds, and third in blocked shots all-time for Jim Boeheim’s program. His No. 44 jersey was retired by Syracuse in 2006 and hangs in the rafters in the Carrier Dome.

So Coleman’s words carry a lot of weight in the Syracuse basketball community. He recently sat down with Mike Waters at Syracuse.com to discuss a wide range of topics, including media coverage, his relationship with Jim Boeheim, and working with minority students.

Coleman was also asked about his relationship with former longtime Syracuse assistant Bernie Fine, who was fired in 2011 after multiple allegations were filed against him of sexual abuse of 2 former Syracuse ballboys. Coleman avoids discussing the specifics of Fine’s departure and focuses on his appreciation for Fine as a coach and mentor (starting at 42:08).

“It bothers me,” said Coleman. “To this day. I still talk with Bernie. Bernie is…he is Syracuse. All of us, we still communicate with Bernie all the time. So even with everything that was going on, I remember having a conversation with [former Syracuse athletic director] Daryl Gross. I said I understand what’s going on and how everything is going to play out. But listen to me. You might not feel that right now. But when Bernie Fine leaves, we gonna take four or five steps backwards. Because he was the glue. He was the connector to everybody.”

While it’s understandable that Coleman had a specific relationship with Fine as a coach based on his personal experience, it’s hard to read those quotes out of context from the things Fine has been accused of. While Fine was not charged after the criminal investigation of child molesting accusations, multiple credible accusers came forward at different times (as well as accusers who recanted), and other pieces of evidence make it hard to disassociate Fine from the things he’s accused of.

When asked if there is ever a chance that Fine will be welcomed back into the fold at Syracuse, Coleman seems very realistic given that the former coach is very much persona non grata now.

“I would love to see that happen but I think [that ship has] sailed because the changing of the times,” said Coleman. “I’ve had conversations with Bernie about that and he’s like, Derrick, I’m at peace with it. So I said well if you’re at peace with it, I’m at peace with it. But it still doesn’t really…everything that you put your heart and soul into this university, you know, for you to leave the way that you left. It bothered all of us. Still bothers us. And I think it really puts a damper on he and [Boeheim’s] relationship.”

Coleman clearly doesn’t believe the allegations against Bernie Fine, and Fine has never been charged with a crime, but it’s going to be hard for many people inside and outside of the community to feel in agreement with these sentiments. Certainly, the phrase “Bernie…is Syracuse” is something that is going to make a lot of people uncomfortable, to say the least.