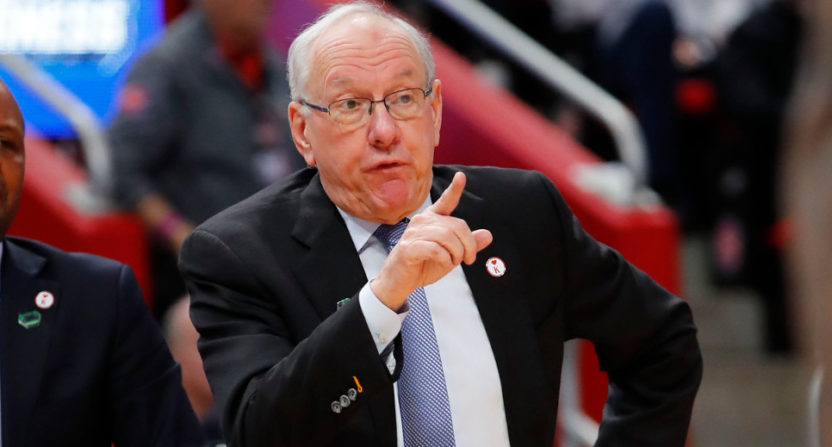 One of the big debates in basketball revolves around whether to foul or not when up three points in the final seconds. If fouling’s done correctly away from the act of shooting, it provides the opponent with only two free throws rather than a chance for a tying three-pointer, but a lot can go wrong with foul attempts and with back-and-forth free-throw shooting. Syracuse coach Jim Boeheim has been pretty consistently on the foul side of the debate, though, and that strategy worked out very well for his 11th-seeded Orange Sunday against the third-seeded Michigan State Spartans.

Syracuse led 52-49 with 7.9 seconds left, but Michigan State had the ball in the offensive half thanks to a ball that went off an Orange player and out of bounds. Once the Spartans inbounded it, the Orange immediately fouled, and that led to CBS analyst Jim Spanarkel talking about how Boeheim told him previously “I always foul.”

And that led to a free-throw shooting contest. Matt McQuaid (who made the brilliant first-half buzzer beater for Michigan State) hit both of his shots, leaving the Spartans down by one. Syracuse then inbounded it with a long pass to Tyus Battle, who was fouled and hit two shots to extend the lead back to three. Michigan State came back the other way and Boeheim called for his team to foul again; they did, and Cassius Winston made two shots to reduce the lead to one.

The Spartans then fouled Paschal Chukwu, who made his first shot but missed the second one with 2.4 seconds left, leaving Michigan State with no time. A desperation heave from Winston didn’t go, giving the Orange a 55-53 win. Here’s the clip of that, complete with a close-up of Boeheim apparently picking his nose between shots:

That’s a nice call from Ian Eagle too. “No good! The madness is real! The Orange crush the Spartans’ tournament hopes!” Sadly, this wasn’t quite as beautiful as some other endings we’ve seen, or even that first-half buzzer beater. But a lot of that’s about Boeheim’s decision to repeatedly foul and turn this into a free-throw battle.

It may not have been pretty, but his guys did their job perfectly, and it worked out. And the Orange, who many argued shouldn’t even be in this tournament, are heading on to the Sweet Sixteen. If this is indeed a trolling-based strategy, it’s certainly working brilliantly, and the repeated fouling up three is just the latest development there.