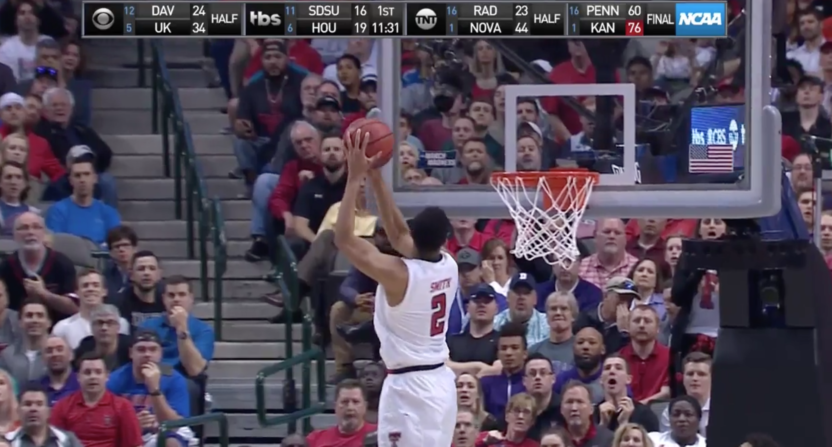 Zhaire Smith pulled off a ridiculous 180 dunk on alley-oop, in the NCAA Tournament!

We’re only one day through the NCAA Tournament, but it’s likely that Texas Tech guard Zhaire Smith probably had the best dunk we’ll see for all of March Madness. It would be quite a feat if someone out there comes up with something better. Wow, make sure to check out this insane 180 alley-oop dunk Smith threw down in the Red Raiders’ win against Stephen F. Austin:

No. 11 seed Loyola-Chicago with the buzzer-beating three to (slightly) upset No. 6 seed Miami

A classic ONIONS moment (although without Bill Raftery calling it, unfortunately). Gotta love March. Nothing beats the Madness:

The Cougars ultimately came out on top, with guard Rob Gray making this last-second acrobatic layup. You can no longer fault him for the bad turnover he had that lost the conference championship game for the Cougars:

If you bet that game correctly, you may have won enough money to Buy Bitcoin. Make sure to follow all the rest of the action this weekend so that you are up to date on the remaining matchups so that you can win even more!

Tiger Woods is back

Or, at least it seems that way. Tiger finished just one shot back in the Valspar Championship and nailed this ridiculous putt on 17:

Tiger is even the favorite to win the Masters next month. While the odds for him winning are ridiculously high compared to his past performance, no other golfer moves the needle like Woods.  There are a plethora of better options out there if I was going to place my bet, since the whims of the odds and the general public can change from hole to hole, when it comes to the performance of Tiger. There’s no logical way that Woods should have better odds than guys like Johnson, Thomas, Spieth, Day, Rahm, or Mcllroy, among many others. Considering Tiger’s performance (or lack thereof) the past few years, and how he has performed in the major events, his odds should be somewhere closer to 50 to 1, if not even worse.

Isaiah Thomas is a 5’9″ guard with crazy handles, and Nikola Jokic is a 6’10”, 250-pound center. If Jokic has to guard Thomas one-on-one at the top of the key, it’s not going to go well for the Nuggets’ big man. That’s what happened here, and Thomas very much enjoyed how much he fooled Jokic with the blow-by to the hoop. Make sure to check this one out: