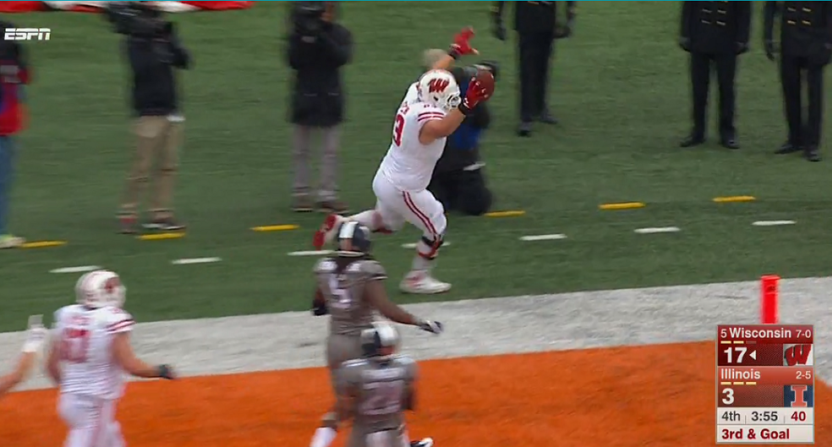 No. 6 Ohio State rallies late to take down No. 2 Penn State

Ohio State beat Penn State 39-38 in a wild game that had the Nittany Lions leading by as many as 18 points, and 15 points entering the fourth quarter.

The game began with Penn State superstar running back Saquon Barkley returning the kickoff for a touchdown, and Gus Johnson went nuts.

Things continued to go well for Penn State, until the fourth quarter came along. After Ohio State blocked a punt, J.T. Barrett hit Johnnie Dixon for a 38-yard touchdown to get within eight (after the XP) with 11:05 left.

Penn State kicked a field goal to stretch the lead back up to double-digits, but Barrett again found Dixon for a touchdown with 4:24 on the clock.

And with 1:48 left, Barrett threw a 16-yard pass to Marcus Baugh for the Buckeyes’ game-winner:

Michigan State’s Felton Davis III made this crazy catch that would send the Spartans’ game against Northwestern into overtime.

However, in the third overtime, Michigan State lost on this horrible play.

Missouri’s longsnapper has a cannon

Unfortunately, that skill isn’t really needed in this role and the accuracy is pretty brutal.

Eddie Jackson was a playmaker at Alabama and it appears to be carrying over to the NFL for the Chicago Bears.

CAT ON THE FIELD

This cat ran for more yards than the Miami Dolphins did on Thursday Night Football in Baltimore. And Tony Romo had terrific commentary.