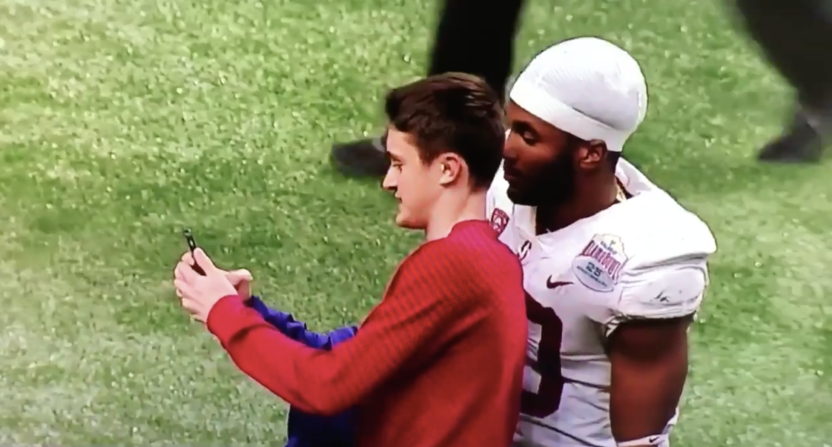 On Thursday night, Texas Christian University pulled off a fantastic 18-point comeback to defeat Stanford and win the Alamo Bowl 39-37. After the loss, Stanford players walked across the field to shake hands with their Horned Frog counterparts and congratulate them on the win.

In the midst of all of this, Heisman trophy finalist Bryce Love was asked to take a selfie.

The young man who asked Love for the selfie was originally wearing a TCU top only to take it off and sport a Cardinal shirt underneath.

Dude really took off his TCU shirt to a Stanford shirt to get a Bryce Love selfie. These fans aint loyal pic.twitter.com/1Ndzj6fOuI

That’s honestly impressive and smart planning by Coleman. Understandably though, the young fan was ripped for pulling off the stunt with Love after Stanford’s loss. His rationale does make it a little better though.

I’ve got pictures with every TCU player already so I thought might as well take one with the Heisman runner up? https://t.co/FfuZiwKnyO

I’ve been going to TCU home games for 17 years. I’ve went to the rose bowl and both Alamo bowls. Both my parents, my aunt, and my grandmother went there. I love TCU but you can’t pass up on a pic with Bryce Love

Maybe this will help the young fan get into the top school in California too.

Btw @Stanford I’m applying to your school. Should I include this on my application? https://t.co/ROTrAwy4SG

After this incident took the Internet by storm, Scott Van Pelt commented on the controversial selfie.

Despite SVP basically saying the stunt was silly and stupid, he did describe Coleman’s plan in detail without even talking to the young man.

SVP nailed it. That’s exactly what I was thinking from the moment I found out we were playing Stanford https://t.co/wcJYv5TU18

I can’t shame the kid. He had the guts to run on the field after the game and ask the Heisman finalist for a selfie moments after taking off a TCU sweater. I know I couldn’t do that.