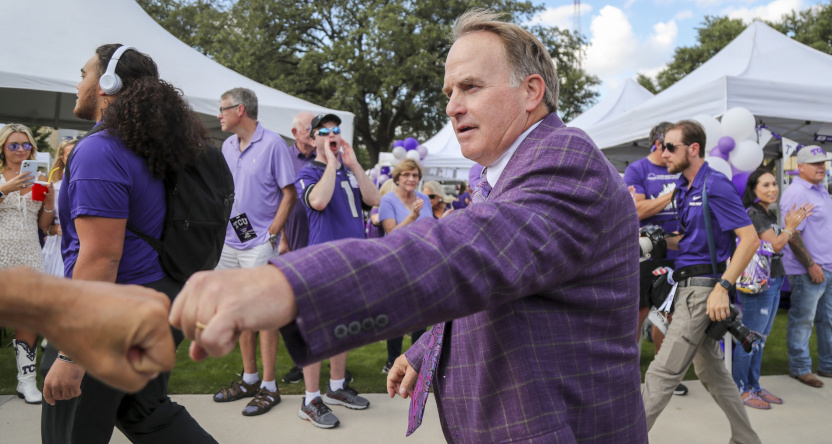 The second-longest-tenured FBS head coach is moving on. Gary Patterson (seen above ahead of an Oct. 23 game) had been leading the TCU Horned Frogs since December 2000, taking the head role there ahead of a bowl game that year after Dennis Franchione left for Alabama. But after TCU fell 31-12 to Kansas State Saturday (interestingly enough, in a game not discussed on any network postgame show) and dropped to 3-5 on the season, the Horned Frogs announced Sunday that they and Patterson are mutually parting ways.

Here’s more from a TCU statement:

“The story of Gary Patterson and the rise in the fortunes of the TCU football program over the last 20 years is clearly one of the most remarkable in the history of college football. We are grateful to Gary and Kelsey Patterson and appreciate everything they have meant to TCU and the Fort Worth community. Under his leadership, TCU has become a nationally recognized brand name in football and in collegiate athletics. Chancellor (Victor) Boschini and I met with Coach Patterson today and mutually agreed that the time has come for a new voice and leadership in our football program.

We asked him to continue on as our head coach for the remainder of the season, and take on a different role in 2022, but he believed it was in the team’s and TCU’s best interests to begin the transition immediately. We respect Coach Patterson’s perspective and will move forward in that direction. I’ve asked Jerry Kill to serve as interim head coach, and he has accepted the role for the remainder of the season. Coach Patterson will assist TCU in the transition to take place.”

Kill has long worked with Patterson, including under Franchione at Pittsburg State, and was Patterson’s best man in 2004. He has decades of head coaching experience, including with Minnesota from 2011-15, so he’s probably a good interim fit here. But it will be particularly interesting to see who TCU targets to take over next year, and if they’re able to get one of their top choices, as there are lots of jobs already open.

TCU and Gary Patterson mutually agree to part ways, meaning there are 7 — yes, seven — Division-I openings … and it's not even November yet.

The Texas Tech opening there is particularly notable, as the Red Raiders just fired head coach Matt Wells earlier this week. With both of those teams not only in the same state but the same conference (the Big 12), they’re regularly competing for recruits, and they may now be competing for head coaches as well. CBS Sports’ Dennis Dodd has more on that:

With Texas Tech having fired coach Matt Wells last week, TCU saw an opportunity to open its position and “compete” with its in-state Big 12 rival for candidates. With the Horned Frogs and Red Raiders already battling over players, they will now go head-to-head looking to bring in a program-altering coach.

Dykes and UTSA coach Jeff Traylor are believed to be among the top names being considered by Texas Tech. Traylor on Sunday signed new 10-year deal with the Roadrunners. It’s unknown whether his new $7.5 million buyout would be enough to turn a Power Five program away from looking at Traylor.

That Traylor deal is a notable one, as that deal runs through 2031 and is set to pay him $2.8 million a year, very high by Conference USA (and overall Group of Five) standards. But a $7.5 million buyout (which does kick in immediately) may not be out of the question for many Power Five schools. We’ll see if Traylor winds up getting a look from either Texas Tech or TCU.

As for Patterson, he had a remarkable run with the Horned Frogs. The only current FBS head coach with a longer tenure is Iowa’s Kirk Ferentz, who took that job in 1999. And Patterson went 181-79 at TCU, passing Dutch Meyer (who was the head coach there from 1934-56) as the school’s all-time winningest coach with his 110th victory back in 2012. , and he led them to a Rose Bowl win in 2011. Patterson led the Horned Frogs through stints in the WAC, Conference USA, the Mountain West, and the Big 12, and his time there will be long remembered by fans. It’s certainly interesting that TCU is now moving on, and we’ll see who they wind up going with.