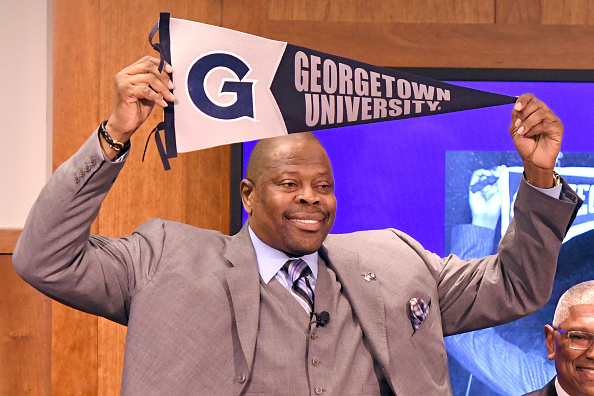 Many people have a favorite college basketball team. Usually, it’s your alma mater. Sometimes, it’s a school in your home state. But what about those of us who didn’t grow up rooting for one particular university?

Here’s your guide on which schools to cheer for this fall. Some of these teams will be good. Some will be awful. Rest assured, they all need your support.

Mike Krzyzewski is the greatest college basketball coach since John Wooden. But as successful as he has been, his coaching tree is mediocre: Quin Snyder, Bob Bender, Johnny Dawkins, David Henderson, etc.

There are a few outliers. Mike Brey is by far the most successful. He has consistently kept Notre Dame relevant. Remember the John MacLeod days? #Groan. Brey has steered the program since 2000 through two conferences (Big East and ACC) and has done so at a football-first school. Give him a round of applause.

Who's ready for #NotreDameBasketball @Bonziecolson will dominate this year here are the @acc highlights from last year pic.twitter.com/5T7dvmJTWI

Notre Dame is picked to finish third in the ACC behind usual suspects Duke and North Carolina. Brey might have the league’s best player in Bonzie Colson. The undersized (6-foot-6) senior forward is the ACC preseason player of the year. Colson was the only ACC player to average a double-double last year, leading the league in rebounding (10.1 per game) and finishing ninth in scoring (17.8). The Fighting Irish have two other returning starters in senior guard Matt Farrell and senior forward Martinas Geben. (Upperclassmen! What a concept!)

This could be one of Brey’s better teams. With some breaks, perhaps good enough to reach the Final Four – a place the Irish haven’t been since 1978.

You should be happy if: They challenge for the ACC crown.
You should be terrified if: You see Brey return to wearing mock turtlenecks.

Get ready to party like it’s 1984? Well, not quite yet. Georgetown went back to the future by hiring its most famous basketball alum. Patrick Ewing returns to the Hoyas with an NBA resume. He has no previous college coaching experience. Ewing probably will be fine with the strategic part of the game. The problem is, college basketball is more about recruiting, relationships and connecting kids. The players he is coaching or recruiting know very little about Ewing the player. At 55, that’s fairly old for your first head coaching gig.

Jessie Govan has to be a star. Had a good sophomore year but must blossom into an all-conference player. https://t.co/IBJXMhTxmp

The days of Hoya Paranoia are long gone. They are coming off consecutive losing seasons for the first time since 1973. Georgetown is picked to finish second to last in the Big East, ahead of only to DePaul. Nobody fears a program that has one returning double-digit scorer in junior center Jessie Govan (10.3 ppg). He’s no Patrick Ewing, Alonzo Mourning or even Roy Hibbert.

There is also the lingering feeling that legendary coach John Thompson has too much influence over the program. It’s a perception that Ewing will have to battle until he establishes himself. He might have the toughest rebuild job in America given the traditional expectations.

You should be happy if: Georgetown finishes with a winning conference record.
You should be terrified if: Ewing demands that all players wear knee pads.

Bob Huggins is probably the best active coach without a national championship. Given his age (64) and history of health issues, he might be running out of time. The Mountaineers rolled out to a 15-2, 4-1 record last year with that conference loss coming by one point in overtime at Texas Tech. They were ousted in the NCAA Tournament Sweet 16 in a 61-58 loss to eventual NCAA runner-up Gonzaga. West Virginia was Team Unlucky with six losses by four points or loss, three in OT.

Pretty sure Jevon Carter is in his 8th year of college. https://t.co/QvA89B5eFT

West Virginia is picked to finish second in the Big 12 behind – who else? – Kansas. Can the Mountaineers prevent the Jayhawks from their 14th straight Big 12 title? (This is the most impressive run by an major conference team since UCLA in the 1970s.)

The Man With the Golden Shoes, senior guard Jevon Carter, is back. Remember when the Internet made fun of Kansas’ Perry Ellis because it seemed like he was there forever? Expect Carter to get similar treatment. Especially since he looks suspiciously like a middle-aged mechanic.

West Virginia should be battle-tested thanks to a stronger than usual non-conference schedule, featuring Texas A&M, Virginia, Kentucky.

You should be happy if: They stop Kansas’ streak.
You should be terrified if: You see Huggins looking like a dude 46 years too late for his high school prom.

Rutgers football is bad and has been bad – with the exception of the Greg Schiano years. I get that. Winning in football is hard and only a precious few places do it consistently. But there is absolutely no excuse for Rutgers to be bad at basketball. None. Yes, going from the Big East/American Athletic Conference into the Big Ten wasn’t the best move. Still, there is more than enough talent in New York City/Northern New Jersey to support a decent basketball team. Rutgers hasn’t been to the NCAA Tournament since 1991 and has made the tournament just six times.

Steve Pikiell is the latest coach to try. In his first season, Rutgers finished last in the Big Ten 15-18, 3-15. It was the third straight season in which the Scarlet Knights have finished last since joining the Big Ten. The Big Ten – for some weird reason – does not release a preseason poll. But Rutgers is expected to be better. Is that enough to keep them out of the basement? There is some solid returning talent in guard Corey Sanders and forward Deshawn Freeman. If freshman guard Geo Baker makes an impact, that might be a huge key.

It took Pikiell until Year Five to get Stony Brook to a postseason berth. It finally made the NCAA for the first time in 2015-16. Rutgers should be patient.

You should be happy if: Rutgers wins six Big Ten games.
You should be terrified if: You see Mike Rice on campus.

The only man to move the needle in the modern era at Stanford was Mike Montgomery. He guided the Cardinal to five Sweet 16 appearances and the 1998 Final Four. Since he left in 2004 to take over the Golden State Warriors, the program hasn’t been the same. In his final season, Stanford was a national championship contender but was upset in the second round by Alabama to finish 30-2. After Montgomery, Trent Johnson and Johnny Dawkins got the program to a Sweet 16 each, but consistent success has been elusive.

If there's one team in the PAC12 that can surprise this season it's Stanford. Reid Travis is an absolute monster. #Stanford

Jerod Haase’s first season was an unremarkable. He went 14-17 (6-12). But with four returning starters and five of the team’s top six returning scorers, there’s a chance Stanford might be a sleeper. The Cardinal is picked to finish fifth in the league. They have a star player in Reid Travis (17.4 ppg, 8.9) who was to the only player in the Pac-12 ranked in the top five in scoring and rebounding.

The biggest challenge will be finding a way to win away from home. Stanford was 1-10 in road games.

Vanderbilt is one of those programs that could be a sleeping giant. Nashville is a fun town with many entertainment options. It’s a big city – as opposed to many of the small college towns in the SEC. (Ever been to Starkville? Or Auburn? Or Gainesville?) There is no NBA to compete against. Vanderbilt has alums with money. If you found the right coach, this program could be something special. You can’t be Kentucky, but you could be as good as Florida.

Is Bryce Drew the right guy to lead the Commodores? He was terrific at his alma mater Valparaiso (124-49 record). In his first season at Vanderbilt, he got the team to the NCAA Tournament, surviving a tough schedule. This year’s squad is picked to finish seventh in the SEC. Leading the way is sharpshooter Matthew Fisher-Davis (13.9). Vanderbilt led the SEC in 3-point accuracy (37.7) and set a school record with 337 3-point baskets.

When he was hired, Bryce Drew said he wanted to coach Vanderbilt to its first Final Four. That doesn’t seem crazy. It might happen faster than most people think.

You should be happy if: Vanderbilt reaches the NCAA Tournament again.
You should be terrified if: Fisher-Davis forgets the score in a late-game situation again.