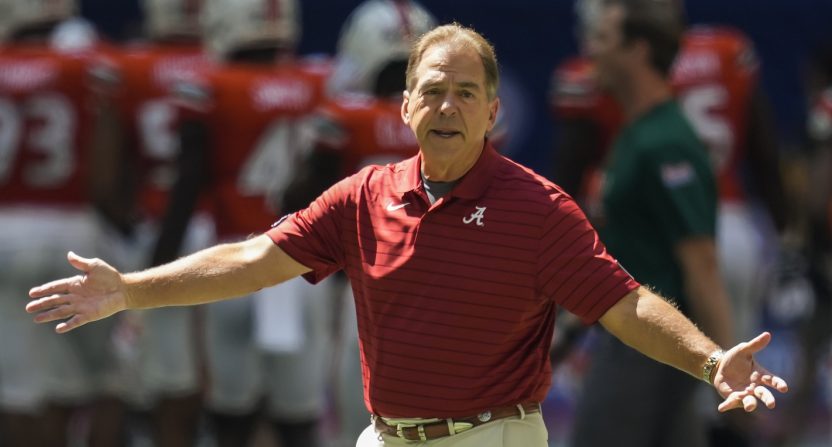 There are all sorts of cases of conversations with under-contract coaches from other college football programs, with those perhaps sometimes paving the way for moves like Lincoln Riley leaving Oklahoma for USC. The one that happened at the SEC meetings in Destin, Florida Wednesday isn’t likely to lead to a coach switching jobs, but it is notable for the source of the offer, the target of the offer, and the specifics of the offer. That would be a high school junior who snuck into the event and approached Alabama coach Nick Saban (seen above last September) at lunch, making him a proposal to return to his former coaching job at LSU. Here’s more on that from Trey Wallace at OutKick:

I caught up with the Tide’ head coach and had to ask him what the kid wanted to discuss with him.

…Before walking out of the Sandestin Hilton, Nick Saban offered me one final response about the young man who decided to come hangout at his table.

Wallace also spoke to the teenager in question (who snuck by an “event attendees only” sign to enter an area reserved for coaches and administrators, and told a questioning sports information director that he worked for a major media outlet) to get his motivation for this:

“For the pain he’s given me for the past twelve years. January 9th to 2022, he has given me so much pain. I go to the LSU-Alabama games, I sit there in the 4th quarter, LSU is up and I think this is the year and then I just see Saban just run away with it.”

“I am a diehard LSU fan,” the young kid noted. “I build myself up on Fridays thinking this is the year we’re gonna beat him, we’re gonna beat ’em. They have the lead and then they just blow up. I just think that I can’t believe I just witnessed another Saban beatdown again.”

“I respect him, I respect everything he does, I love his process, I love everything about him. I just can’t stand losing to him.”

There are a lot of fans from a lot of fanbases that can probably relate to that feeling. Saban is 178–25 at Alabama overall since taking that job in 2007. He’s 103–16 in SEC play with the Tide, and has won six national championships there. But, considering that he has $9.9 million guaranteed from Alabama this year and is under contract through the 2028-29 season, it would probably require more than $5,000 to get him to leave for another job.