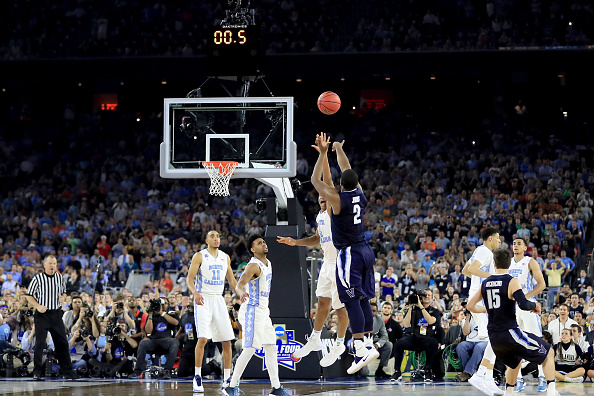 Okay. You’re probably stuck at home and missing March Madness. Here at TheComeback.com, we’re always trying to cheer you up. So, here are ten NCAA Tournament games you can experience all over again to improve your mood. These are from the past 20 years.

In no particular order, here we go:

This felt like an Elite Eight matchup. Wichita State was 35-0 and much of the talk coming into the tournament was whether or not the Shockers were worthy of a top seed. They had a chance to prove themselves against arguably the most talented No. 8 seed ever.

This game was played at a high level – both teams shot over 50 percent and there were only a combined 20 turnovers. Wichita State had a 37-31 halftime lead, but Kentucky took the lead for good 73-71 on James Young’s 3-pointer with 1:37 left. Wichita State had a chance to win. but Fred VanVleet missed a three-point attempt at the buzzer. It’s funny, Wichita State got more respect in this loss than it did for any one of its victories. Kentucky, an underachiever during the regular season, reached the championship game where it lost to Connecticut.

This game introduced America to a school most of us had never heard of before. It even had a super fun nickname: “Dunk City,” possibly the best moniker since “Phi Slamma Jamma.” Florida Gulf Coast became just the seventh No. 15 seed to defeat a No. 2. The punctuation came when Chase Fieler threw down an alley-oop dunk in the final minutes. The crowd roared with delight on Florida Gulf Coast as they progressed. It then defeated San Diego State to reach the Sweet 16.

After that, no one confused Florida Gulf Coast with a community college. The tournament run launched the career of Andy Enfield who left for USC. It also marked the beginning of the end for John Thompson III’s Georgetown program. The Hoyas haven’t been the same since.

George Mason might be the most unlikely Final Four participant ever. It had never even won an NCAA Tournament game. This felt like the equivalent of Chuck Yeager breaking the sound barrier. It’s one thing for a mid-major to have a few upsets. Of George Mason’s four victories, three came against prestigious programs: Michigan State, North Carolina, and Connecticut.

The Patriots had a 74-70 lead late in regulation until UConn sent the game into overtime on a layup as time expired. In the extra session, George Mason had an 86-81 lead with 13.6 seconds left. This time they held on. George Mason proved that small schools could compete at the highest level. Since then, we’ve seen VCU, Butler (before it became an established power), and Loyola-Chicago crash the Final Four.

The greatest Illinois team of all-time staged one of the greatest comebacks of all-time. The Illini rallied from 15 points down with four minutes to go in regulation. Featuring a backcourt trio of Deron Williams, Dee Brown, and Luther Head, Illinois won its first 29 games and entered the Elite Eight 35-1. The lone loss was a last-second defeat at Ohio State. Illinois enjoyed an easy traveling path to the National Championship game (Indianapolis, Rosemont, Ill. (Chicago-area) and St. Louis). The Elite Eight crowd included Bill Murray.

Down 75-60, Illinois rallied. Two Arizona turnovers in the final minute led to five Illini points, including a Williams three-pointer to tie the score at 80 with 38.2 seconds to go. In OT, Williams made a three-pointer, and Head had a steal and layup to put Illinois up 90-84 with 1:52 left. Arizona’s final shot was an airballed three, and the party was on in Illinois.

If you like fun basketball with a big comeback and an exciting finish, you’ll love this. A battle between mid-majors turned out to be one of the best games of the 2008 tournament. Western Kentucky was making its first NCAA appearance since 1995 and Drake hadn’t been there since 1971. For most of the game, WKU dominated and held 16-point lead. Then suddenly, Drake found another gear and went on a 30-14 second-half run. A three-pointer with 30 seconds left forced overtime.

This set the stage for one of the tournament’s most famous game-winning baskets. It didn’t come from future NBA player Courtney Lee or Tyrone Brazelton (33 points) but Ty Rogers. With his team trailing 99-98, Rogers launched a 26-footer with three defenders closing. The shot swished through for the miraculous victory. Rogers ran around the court in celebration with his teammates chasing him. That’s why we love March Madness.

Duke was the defending National Champion and the No. 1-ranked team in America. The Blue Devils’ starting lineup featured five future NBA players, led by National Player of the Year Jay Williams. Mike Krzyzewski seemed destined for another championship. The Hoosiers were a 22-11 team with one future NBA player in forward Jared Jeffries, and a second-year coach in Mike Davis. It wasn’t a surprise when Duke jumped out to a 17-point first-half lead, but the Hoosiers kept attacking inside, keyed by Jeffries’ 25 points and 15 rebounds.

Indiana led 74-70 with 11.1 second left, but the Hoosiers almost blew it when Dane Fife fouled Williams’ on a made three-point basket. Davis collapsed by his chair in disbelief. But Williams missed the free throw and a put back lay-up attempt by Carlos Boozer didn’t fall. The Hoosiers went on to the national title game where they lost Maryland.

There are certain sports moments where you remember exactly where you were when they happened. This is one of them, because a No. 16 had never beaten a No. 1. This was the basketball equivalent of Buster Douglas beating Mike Tyson. Except that boxing match took place before the modern Internet era, so few people saw that live. The entire sports world experienced Virginia’s meltdown in real time.

Virginia was the No. 1 overall seed and 31-2. The Retrievers didn’t just beat Virginia. They crushed them, outscoring the Cavaliers 53-33 in the second half. From a point spread stand, it was the second-biggest upset in NCAA Tournament history. Virginia was favored by 20.5 points (The record is Norfolk State defeating Missouri, which was a 21.5-point favorite). What many people also remember is the graciousness of coach Tony Bennett after a humiliating loss.

This was the best game of last year’s tournament. Purdue was on the verge of capping a surprising season by knocking off Virginia, but the Cavaliers got a buzzer-beating jumper from Mamadi Diakite to send the game into overtime. They grinded it out in OT to reach the Final Four for the first time since 1984, and went on to win the National Championship.

After beating Purdue, the expression of sheer joy on Virginia coach Tony Bennett’s face as he was cutting down the nets was priceless.

Virginia withstood a one-man assault from Carsen Edwards, who scored 42 points and made 10 three-pointers, one shy of the NCAA tournament record. He was named the Most Outstanding Player of the South regional. He became the first player since Davidson’s Stephen Curry in 2008 to earn that honor from a losing team.

Kentucky had three 2017 lottery picks in the starting lineup: freshmen DeAaron Fox, Malik Monk and Bam Adebayo. This group was good enough to win a championship. North Carolina was pretty good too and this matchup of the two most storied programs in college basketball lore didn’t disappoint. This was a rematch of a regular season meeting won by Kentucky 103-100 in Las Vegas.

In a game with a lot of star power, the biggest hero was North Carolina reserve forward Luke Maye. His jumper with 0.3 seconds left was the winning bucket. Interesting side note: this outcome led to a lawsuit from referee John Higgins against Kentucky Sports Radio host Matt Jones and editor Drew Franklin. Higgins claimed their criticism of his officiating resulted in harassment. That suit was dismissed last year.

A Hollywood ending for arguably the greatest NCAA title game. Kris Jenkins’ three-pointer as time expired was the game-winner. The scene was so dramatic it had everyone screaming whether you were at the game or on the sofa. The only person who wasn’t overcome with immediate emotion was Villanova coach Jay Wright. He calmly watched the moment unfold and simply said “bang” as the shot left Jenkins’ hands. For Wright, this culminated a 15-year quest to return the Wildcats to championship glory.

As amazing as Jenkins’ shot was, it wasn’t even the best shot in the final minute. North Carolina point guard Marcus Paige connected on an absurd three-point basket to tie the score at 74. He heaved up an off-balance prayer with 4.7 seconds left. The game seemed destined for overtime until Jenkins sent everyone home. It’s one of the most memorable moments in sports history.