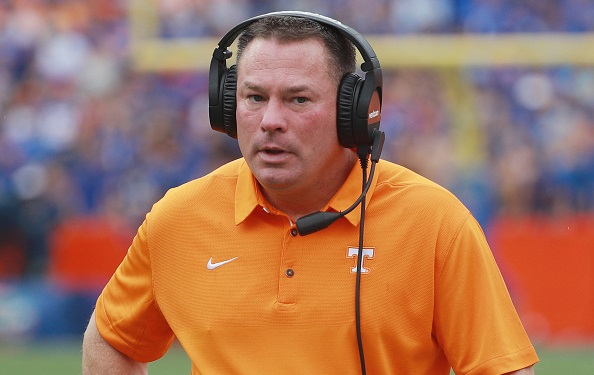 Apparently, giving up 50 points to one of the worst teams in the SEC was the final straw for Tennessee. On Sunday, Butch Jones was fired as head coach of the Volunteers with two games remaining in a miserable season. Fox Sports’ Bruce Feldman was the first to report the news late Sunday morning.

BREAKING Butch Jones is out as #Vols head coach, source tells me. He just informed his staff.

Tennessee was not expected to win the SEC East, but they were projected to be competitive in the division with Georgia and Florida. The Bulldogs may have been even better than most predicted going into the season, while the Gators were also a disappointment that resulted in the firing of head coach Jim McElwain. But the Volunteers were ranked to begin the season, albeit at No. 25. (The Comeback’s preseason ranking placed Tennessee at No. 20.)

Regardless of preseason projections, a 4-6 overall record and 0-6 mark in the SEC was not what anyone wanted to see in Knoxville. The Volunteers opened the season by squeaking out a one-point overtime victory over Georgia Tech in Atlanta, but it was a messy downhill slide from there. Beginning conference play with a loss to rival Florida was certainly disappointing, but the Vols followed that up by barely beating UMass at home.

That raised plenty of concerns which were resoundingly confirmed when Georgia came into Knoxville and absolutely steamrolled Jones’s team, 41-0. How clear could it be that Tennessee was completely outmatched and Jones needed to be dismissed? The coach arguably should have been fired then, yet the athletic department either just didn’t want to make a change at midseason or wanted to see if Jones could somehow turn this season around. (That seems doubtful, considering all the evidence that had been accumulated up until that point.)

If Tennessee wanted to wait until after the season to make a coaching change, the football team’s lack of success made that an increasingly difficult choice. The Vols followed up that Georgia defeat by losing four of their next five games. No one would fault Tennessee for losing to Alabama, though if Jones’s team had shown any sign of competitiveness, perhaps that could have created a kernel of hope. But the Vols were crushed, 45-7. The team also lost to South Carolina and Kentucky (just their second loss to the Wildcats in 33 years) before getting a non-conference respite against Southern Miss.

But losing 50-17 to Missouri in Columbia, a team that Tennessee defeated 63-37 last season, was all athletic director John Currie could stand and everyone involved with the Vols football program could stand no more. The Volunteers showed some fight early on in the game, but looked completely lackluster in the second half Saturday night, getting outscored 26-0 in the second half. Tennessee has shown itself incapable of beating virtually any team in the SEC, but it wasn’t unreasonable to expect a victory against the Tigers — or at the very least, show some competitiveness.

Yet the terrible effort showed that the team had quit on Jones or didn’t consider him a coach for whom to show its best effort. Other than the dreaded “lack of institutional control,” what greater sign could there be that a coach needs to be fired?

The sudden decline has been shocking. Jones had a considerable rebuilding project to undertake after Derek Dooley’s disastrous three-season reign, but had the Vols in a bowl game by his second season and won nine games in his third year. A turnaround and return to contention among the top teams in the SEC seemed imminent.

Tennessee's most recent game vs each SEC team:

But Jones couldn’t push his program up to the higher level that Vols fans expected. When was this team going to overtake the competition in the SEC East, finally defeat Alabama, win a conference championship and be in the College Football Playoff discussion? All four of those goals seem currently far out of reach, which obviously isn’t the objective in Knoxville.

Defensive line coach Brady Hoke will replace Jones for the rest of the season with games against LSU and Vanderbilt remaining. He can certainly provide a steadying hand, drawing on previous head coaching experience at Ball State, San Diego State and Michigan. But it’s highly likely that he’ll only be an interim coach and not be considered for the permanent position after the season. Hoke could possibly be a head coach again, but after his disappointments at Michigan and at Oregon as the Ducks’ defensive coordinator, scoring a job at a top program in the near future is extremely doubtful.

Jones ends his career in Knoxville with an overall record of 34-27 (14-24 in the SEC). He will surely land elsewhere, having had success in previous stops at Central Michigan and Cincinnati. But a top Power 5 coaching position is unlikely in the near future.

Meanwhile, the Vols haven’t won a SEC title since 1998, which was also the year Tennessee won the national championship under coach Philip Fulmer. And now, the football program is looking for its fourth head coach in nine years. Finding the right guy has been difficult (Ty Duffy suggested seven potential candidates after the Georgia loss), and there will be intense pressure to get it right this next time.

UPDATE: Currie released the formal letter of termination given to Jones (via 247sports.com), which revealed that the coach was fired without cause and would receive an $8.2 million buyout.