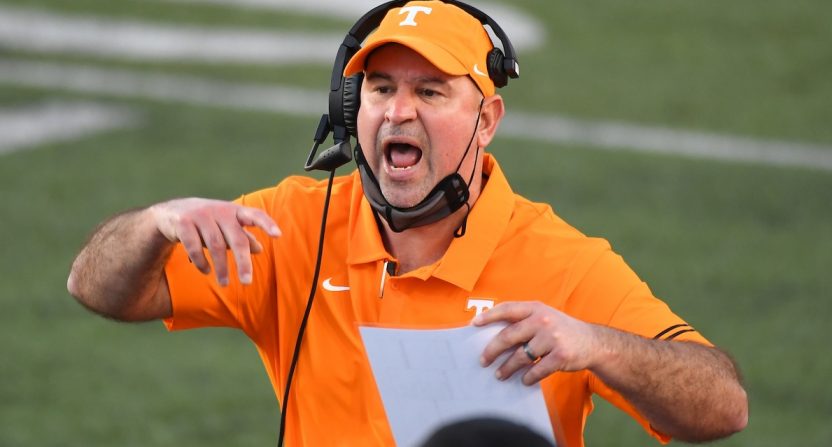 The University of Tennessee football program is finally acknowledging what was clear to SEC and college football observers. Jeremy Pruitt wasn’t getting it done as head football coach and is reportedly making a change.

According to Yahoo! Sports’s Pete Thamel, Pruitt is being dismissed. Kevin Steele, who was just hired to the defensive staff, will take over as interim coach. Additionally, the guy who hired him — athletic director Philip Fulmer — is on the way out as well.

ESPN’s Chris Low and Mark Schlabach report that Tennessee is firing Pruitt following an investigation into alleged recruiting violations. If Pruitt is fired with cause, that would likely allow the school to avoid paying him a $12 million buyout that was part of a two-year extension he signed in September. But the Vols’ performance during his tenure in Knoxville justified replacing him.

Tennessee finished 3-7 during the 2020 season, his second losing season in three years as head coach. As could be expected, the Vols lost to Alabama, Georgia, Auburn, and Texas A&M this past season. But losses to Kentucky and Arkansas were especially upsetting to fans. And each of those seven losses was by double-digits.

"Tennessee is a program that thinks of itself better than it is. It doesn't compete for championships … They are not in an orbit with Georgia and Florida."@dennisdoddcbs with @Hassel_Chris on Jeremy Pruitt's firing pic.twitter.com/x2XpAhJVRI

Yet Pruitt was apparently going to keep his job, almost certainly because of that buyout and the remaining two years on his contract. He even added to his staff, hiring Steele for the same position on his staff.

Tennessee’s recruiting of offensive tackle Amarius Mims is what appears to have precipitated this decision. Schlabach previously reported that the school’s internal investigation focused on “extra benefits provided to football recruits on unofficial visits.” Inside linebackers coach Brian Niedermeyer was involved in the inquiry, while Vols running back Eric Gray and quarterback Brian Maurer were held out of Tennessee’s regular-season finale on Dec. 19 because of the inquiry.

Hey @dpshow, this is how Jeremy Pruitt get his players fired up.

Also, if you ever want to come tailgate outside of Neyland Stadium just give me a shout. pic.twitter.com/tkKzd67BsA

Pruitt was hired from Nick Saban’s staff at Alabama, where he was the defensive coordinator. Following the 2017 season, athletic director John Currie had agreed to terms with Greg Schiano, then the defensive coordinator at Ohio State, to be the Vols’ new head coach. But the fanbase revolted, demonstrated most vocally by Outkick’s Clay Travis, citing Schiano’s alleged involvement with the Jerry Sandusky child sexual abuse scandal at Penn State.

Former Vols head coach Philip Fulmer, who led Tennessee to the 1998 national championship, also made a power play for the athletic director position, pushing out Currie and bringing in his choice for the football coach. Fulmer quickly hired Pruitt, seeking a coach with southern and SEC ties and a defensive mindset who could revive the program following Butch Jones’s dismissal.

But Fulmer ultimately wasn’t suited for the modern requirements of a college athletic director, largely concerned with organization and fund-raising. His previous success as a football coach could only accomplish so much, especially while several SEC rivals leapfrogged Tennessee in the conference hierarchy. Three years after his athletic department coup, Fulmer is stepping down despite being under contract through 2023. His successor will hire the next head football coach.

There's a room inside The Anderson Training Center that tells the story of a man that may have played 18 years in the NFL, but never left Tennessee.

While Steele, a Tennessee alum, works as interim head coach, a new coach will almost certainly take over. The Athletic’s Bruce Feldman reports that Vols legend Peyton Manning will play a big role in the selection process.

Many have pointed to Hugh Freeze as a good fit in Knoxville after his success at Liberty and previous SEC experience at Ole Miss. But the scandal surrounding his resignation in Oxford might still be problematic. Louisiana’s Billy Napier and Coastal Carolina’s Jamey Chadwell, both Tennessee natives, have been mentioned. Shouldn’t Gus Malzahn, recently fired by Auburn, be considered? And former Tennessee Titans coach Jeff Fisher says he’d be interested if the Vols job opened up.

Pruitt is the fourth SEC coach to be fired since the 2020-21 season ended, joining Malzahn from Auburn, South Carolina’s Will Muschamp, and Derek Mason from Vanderbilt.