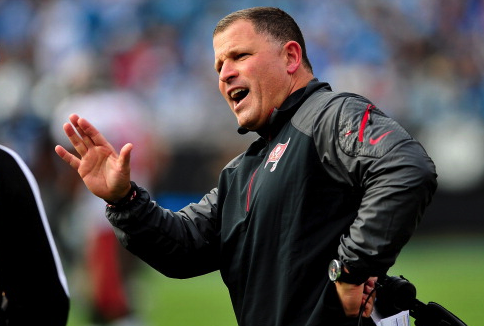 Tennessee got their man on Sunday. Well, they got a coach. And a relatively accomplished one with head coaching experience. Yet Greg Schiano isn’t the coach any Vols fans seemed to want, as the football program was forced to settle yet again for a secondary choice.

Sources: As the last 24 hours have evolved, Greg Schiano has emerged as the focus of Tennessee’s search. Vols have also been engaged with Mullen, who has been trying to wait out Florida.

As soon as USA Today‘s Dan Wolken broke the news that Tennessee had zeroed in on Ohio State’s defensive coordinator and was expected to name him their new head coach, you could feel the discontent brewing from Knoxville and Vols Nation. That animus was surely fueled in part by reports that Tennessee’s preferred choice, Mississippi State’s Dan Mullen, was waiting for Florida to make a decision before entertaining the Vols.

Schiano isn’t what Vols fans had in mind for their next coach. He’s not of the South, he’s not immersed in SEC culture nor familiar with Tennessee’s place in it. He doesn’t look like the kind of coach who could be the Vols’ coach for the next 10 to 15 years. Schiano is Mr. Outside Hire, akin to a mercenary.

I will stop supporting UT athletics. Simple as that. Anyone associated with Sandusky is not welcome.

Sure, anybody Tennessee hired would have been an outside guy. The Vols program didn’t have a favored son to bring home like Michigan did with Jim Harbaugh or an assistant who left and found success elsewhere as a head coach.

(OK, Duke’s David Cutcliffe fits that mold and he has the Peyton Manning glow around him. But at 63 years old, he almost certainly wouldn’t have been a long-term solution for the football program. Should he have been hired as a short-term appeasement, especially if he brought acclaimed defensive coordinator John Chavis with him?)

If they walk Schiano out as the head coach you will have more than couches being burned. Currie needs a homerun hire after letting these Gruden rumors hang around or so long

What — or who — did Tennessee fans have in mind? Let’s put aside the fantasy of Jon Gruden. That was never going to happen. And this is, what, the third time that Vols fans have yearned for Gruden, citing all the family connections that made him the right fit.) The general feeling seemed to be that you would know it when you saw him. The right coach would just feel, well, right.

But since there apparently wasn’t any agreement on who that was, that probably indicates what a difficult task athletic director John Currie was dealing with. Currie made his job more difficult by waiting too long to fire Butch Jones. He was on the hot seat going into this season and was a dead coach walking after a 41-0 loss to Georgia. That was in early October.

Had Tennessee ditched Jones then, Currie could have had two months to start a coaching search ahead of Florida firing Jim McElwain. Or before the SEC became a virtual head coaching job fair, with Ole Miss, Arkansas and Texas A&M also making changes. Instead, UCLA also joined the mix and Nebraska was all but a certainty until officially putting up the “Help Wanted” sign on Saturday. Oh, and Tennessee went on to lose eight games for the first time in school history and go winless in the SEC this season.

Then glad I cut my donation and season tickets last year. Saves me a call this year to remove all support. That’s not a strong pick. It’s desperate

I’m just going to say this if we hire Greg Schiano as our next head coach my options will be open to which college program I will Be donating my TIME and MONEY to. (No disrespect to GS) but if UT leaders don’t take football serious then I will find the program that will!!!

The competition suddenly became too fierce for Tennessee. And though Vols fans will very likely disagree, Tennessee isn’t necessarily a top job in the SEC. Yes, the fan base is fiercely loyal and engaged, the facilities are top-notch and there is huge financial support among boosters. The right coach could make Tennessee a coveted job. But it’s not there right now, which makes other available jobs look more appealing.

Schiano is a good football coach, having turned around Rutgers (don’t look at the overall 68-67 record) in his 11 seasons there. He was a bust with the Tampa Bay Buccaneers in the NFL, going 11-21 in two seasons. But he restored his reputation as Urban Meyer’s defensive coordinator at Ohio State. Well, for the most part. There are many grumblings (this is just one) through Vols Nation right now about Schiano being part of the Penn State coaching staff while Jerry Sandusky was preying on young boys.

Schiano to Tennessee was very predictable. Great spot for him. The guy is a program builder. If you think it’s a bad hire, you don’t know college football.

UT fans hating on Schiano must have forgotten what he did at Rutgers. They were the worst team in the nation when he took over.

Still, where was the creativity in this search? No, Mike Leach may not have been the right fit in Knoxville either. But how much fun would he be in the SEC, dealing with that media corps and the other coaches in the conference. He would bring some personality to a region that needs it, along with a wide-open offense. What about Memphis’ Mike Norvell? Not ready to make the jump to the SEC? Is Iowa State’s Matt Campbell too much of a Midwest guy? Would Oregon’s Willie Taggart be considered too much of a defensive guy?

Once again, Tennessee is fighting against the perception that the football program didn’t hire the right guy. The coach apparently chosen is hugely unpopular with the fanbase — at least on social media. (But in this case, it’s probably safe to say that Vols Twitter probably speaks for Rocky Top Nation.)

A small group is starting to get together at Neyland Stadium to protest a potential hiring of Greg Schiano. More cars are pulling up as I tweet. pic.twitter.com/urTpCvmvll

If Schiano is indeed the new coach, it just looks like a continuation of the cycle that resulted in Lane Kiffin, Derek Dooley and Butch Jones leaving the Vols program far worse than when they took over. (Maybe we should just blame all this on Kiffin for bolting after one year? He appeared to be everything that fans want in a coach now, even if he wasn’t of the South. Young, confident, innovative, NFL pedigree, coveted by other schools.)

Get ready to write all those same tweets, message board posts and sports columns a few years from now. That can’t have been what Tennessee wanted. It’s certainly not what the fans wanted. No pressure on Greg Schiano. He just has to prove all of that wrong.