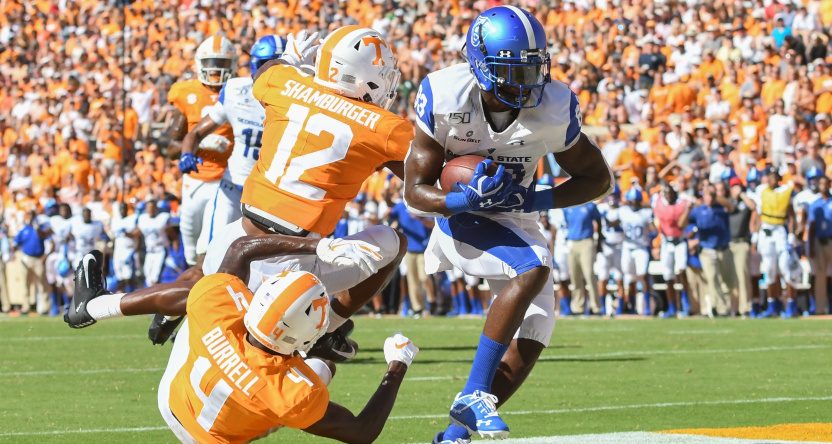 One of the biggest upsets of Week 1 in college football came from the Georgia State Panthers, who beat the Tennessee Volunteers 38-30 on the road Saturday. Tennessee was favored by 24.5 points (as per OddsShark) heading into this one, and the Vols led 14-7 after the first quarter, but the rest of the game was downhill for them. The Panthers cut that lead to 17-14 at the half, then took the lead in the third quarter, and while Tennessee briefly jumped back on top, Georgia State went ahead for good on a nine-play, 75-yard drive with just under nine minutes left:

The Vols then promptly fumbled the ball away on the next possession:

And Georgia State then recorded another touchdown to make things worse:

A Tennessee interception then led to another Georgia State field goal, giving the Panthers a 15-point lead. While Tennessee managed a touchdown with two seconds left to make things look a little closer, they weren’t particularly close to winning it. The boat that caught on fire and sunk at the Vol Navy docks Saturday morning may have been a metaphor…

Boaters coming to the UT game should be aware that docking is reduced by half due to recovery efforts of a 42' cabin cruiser that sank after burning at the Vol Navy docks at 7am. All 4 occupants escaped without injury. Knox Fire Dept. put the fire out and Sea Tow is recovering. pic.twitter.com/nCpySmvM7Z

Meanwhile, this is a huge win for Georgia State, a school that only played their first football game in 2010 and has only been competing at the FBS level since 2013. And this is only their 20th FBS win ever, and it came after a 2-10 season last year. It’s a massive victory for them, and one that’s going to raise a lot of concerns for Tennessee fans.