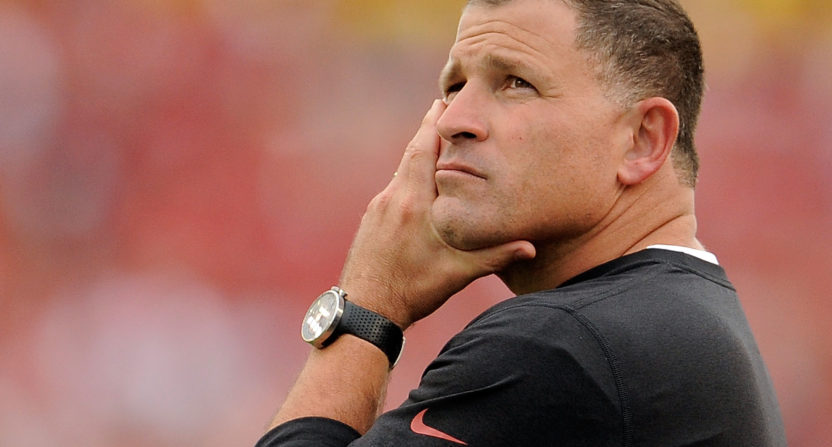 Earlier on Sunday, the Internet reacted in astonishment/amusement when reports surfaced that Tennessee had come to terms with Greg Schiano to replace Butch Jones as head football coach.

Sources: As the last 24 hours have evolved, Greg Schiano has emerged as the focus of Tennessee’s search. Vols have also been engaged with Mullen, who has been trying to wait out Florida.

From our own Ian Casselberry:

As soon as USA Today‘s Dan Wolken broke the news that Tennessee had zeroed in on Ohio State’s defensive coordinator and was expected to name him their new head coach, you could feel the discontent brewing from Knoxville and Vols Nation. That animus was surely fueled in part by reports that Tennessee’s preferred choice, Mississippi State’s Dan Mullen, was waiting for Florida to make a decision before entertaining the Vols.

Schiano isn’t what Vols fans had in mind for their next coach. He’s not of the South, he’s not immersed in SEC culture nor familiar with Tennessee’s place in it. He doesn’t look like the kind of coach who could be the Vols’ coach for the next 10 to 15 years. Schiano is Mr. Outside Hire, akin to a mercenary.

The outcry was immediate, and not just from smart folks like Ian, or dumb folks on message boards that likely weren’t going to be satisfied with anyone less than Vince Lombardi or Jon Gruden, and not necessarily in that order.

And not even from the usual Twitter comedians, who had a giant creamsicle-colored bullseye in their sights:

I think u coud literaly get 90% of greg schianos productivty if u hired a mountain gorilla in a visor but thats why I love him https://t.co/p9EaAn8wOL

There were the students on campus:

And then there were the other voices that matter: the donors.

I don't think y'all know how bad that booster revolt at Tennessee could be re: Schiano

Between that and the outcry of several prominent Tennessee politicians, the deal was eventually called off, mere hours after a tentative agreement had been signed.

Tennessee officials have called Greg Schiano’s representatives and told them they are backing out of their agreement to make him the next football coach at Tennessee. There’s a signed Memorandum of Understanding between Schiano and athletic director John Currie, which they agreed to and signed in Columbus earlier today.

Why the outrage? Well, aside from the fact that Greg Schiano is pretty well-established as, at best, an average football coach (along with being a generally unpleasant person), the protesters latched onto Schiano’s connection to Penn State and Jerry Sandusky:

Some of the backlash was tied to Schiano’s link to the Jerry Sandusky scandal, which Tennessee officials vetted while pursuing Schiano. In a deposition, former Penn State assistant Mike McQueary said he was told by another assistant coach, Tom Bradley, that Schiano had told Bradley that he had seen Sandusky “doing something” with a boy in a shower. The allegation was hearsay and Schiano was never charged with a crime or sued in civil court. Schiano and Bradley have publicly denied the allegations. Bradley has testified under oath he knew nothing of Sandusky’s actions.

So while it’s a tenuous connection at best, it’s the kind of thing that can derail something like this, even though Tennessee is now likely going to have to buy out a football coach who never even made it to Knoxville.

How much money? Well, though it’s probably not going to be this much, here’s a fun rumor:

There are reports that TN will owe Schiano $20 million in a buyout for a contract that was signed but TN backed out of it. But only speculation on this. Fox Sports Knoxville mentioned this.

Holy shit, imagine if it’s $20 million. Or $10 million, or even $1 million. It all looks terrible for Tennessee, which is garnering a bit of a reputation, and if Schiano was the best candidate they found before this, it’s tough to see how they could do better after they booted him on the whims of their fanbase. But, it’s important to note, Schiano probably would have been a bad hire. The backlash wasn’t necessarily wrong, although the messaging was all over the place.

They’re going to end up paying whatever it takes to make Schiano go away quietly, of course, because their only chance to move on is to make a new hire while avoiding a protracted battle over what’s owed to whom. Schiano, obviously, would probably want to take his money and continue coaching, and hope that if he ends up a candidate somewhere in the future, fans don’t follow the same playbook.

The college football coaching carousel is pure chaos, and it’s not yet December. Assuming you’re not a Tennessee fan, administrator, or Greg Schiano, it’s hard to look away from this particular trainwreck.