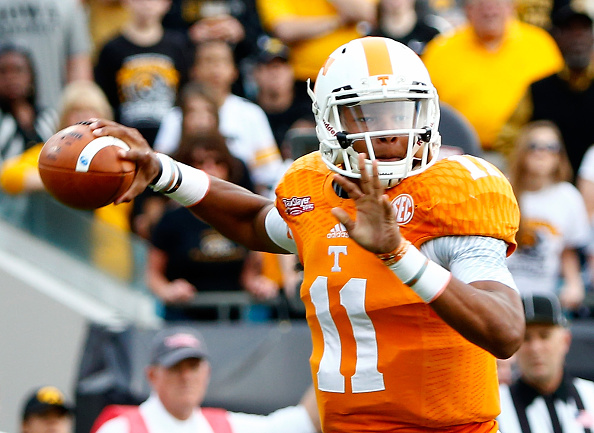 Last season, the Tennessee Volunteers won a second-tier January bowl game in the state of Florida against an opponent from the Big Ten West. The Big Orange brigade blasted Iowa in the TaxSlayer (formerly Gator) Bowl to salvage their season.

This season, the Vols would have preferred to play a Big Ten East team in the Sunshine State, because it would have meant they’d have won the SEC East Division championship. However, coach Butch Jones and his team fell short of that goal.

Relegated to the Outback Bowl, the Vols had a choice: Care about their meeting with the Northwestern Wildcats, or lament their fate and get popped by a team whose defense was the backbone of a 2015 success story in the Big Ten?

One year after the annihilation of Iowa, Tennessee didn’t succumb to boredom or depression. The Vols didn’t do everything they wanted to this season, but they hammered Northwestern in Raymond James Stadium to build a lot of hype for 2016. The Vols were the talk of the SEC East in the 2015 offseason. This 45-6 result ensures that Tennessee will once again reside at the center of the conversation as far as the SEC East is concerned.

The manifest struggles of Northwestern quarterback Clayton Thorson were well-documented heading into Friday afternoon’s encounter. Thorson had uncorked a number of very important, even dazzling, long touchdown runs for the Wildcats this season, starting with his scoring scamper in the season-opening upset of Stanford which ultimately kept the Cardinal out of the College Football Playoff.

Tennessee’s ability to contain Thorson and the Northwestern offense was not seriously questioned as the Outback Bowl began. The centerpiece of this contest was always going to be the matchup of the Vols’ offense and the Wildcats’ formidable defense, which smothered most of Northwestern’s opponents and displayed great gap integrity on a consistent basis. Northwestern’s linebackers regularly occupy the right spots of the field and make proper reactions to the ball. By means of strength, speed or execution, Tennessee had to find ways to scatter or displace the Wildcats from certain pieces of real estate.

After ringing up 45 points, it’s clear that the Vols were able to achieve this task.

Sure, Northwestern’s defense was left hanging by its offense. NU’s inability to keep the ball weighed on the Wildcats in the second half. Yet, before running away with this game after halftime, Tennessee had to bust loose from a sluggish first quarter and build a lead heading into the intermission.

The Vols used their tight end to confuse Northwestern’s linebackers. They then used their speed to get around the edge and take command of the proceedings in Tampa:

GIVE. HIM. SIX.
TOUCHDOWN, #TENNESSEE.#OutbackBowl

When the second half arrived, you could see Northwestern lose its legs — not its effort, just its stamina. The Vols were airtight enough on both sides of the ball to create a game in which the Wildcats simply could not keep pace.

Josh Dobbs, tap dancer and all-around artist. The #VOLS had big fun in the #OutbackBowl. Via @ClippitTV https://t.co/ZPl3TX9BOR

Northwestern can’t leave this season with any real regrets. The Wildcats maxed out by winning 10 games, all with a new and relatively inexperienced quarterback. After a dismal 2014 season, head coach Pat Fitzgerald turned in a very strong performance between the headsets in 2015.

Yet, with all of that having been said, this game underscored the gap between a solid team and a great team. Northwestern has a long way to go in the pursuit of legitimate greatness. The Wildcats were summarily thrashed by the Vols here, and by Iowa and Northwestern during the regular season. NU didn’t merely lose three times; it got trounced three times. That kind of detail matters when evaluating the quality of 10-3 or any other record. Northwestern can sleep peacefully in the sense that it has no regrets, but the Wildcats might rest uneasily in that their weaknesses were so thoroughly exposed.

As for Tennessee, this performance certainly ought to bring a smile to Butch Jones’s face, but the Vols’ coach knows that this same team somehow gacked away a late lead at Florida and failed to finish other games in which it carried multi-possession leads.

In 2016, there is no excuse left for the Vols. Notions of growing pains or learning curves are out the window. It’s “SEC East or bust” in Knoxville. At the very least, the Vols need to win 10 games if they can’t win the division.

At a program such as Tennessee, expectations are desired. They’re part of the equation.

The only problem is that if they’re not met, the locals will grumble.

Tennessee didn’t grumble in the 2016 Outback Bowl, but now that the Vols have once again shown how talented they are, they have created an offseason in which they’ll be inundated with hype. Next September, the Vols must be ready to handle that hype; if they’re not, Butch Jones won’t coach Tennessee in 2017.