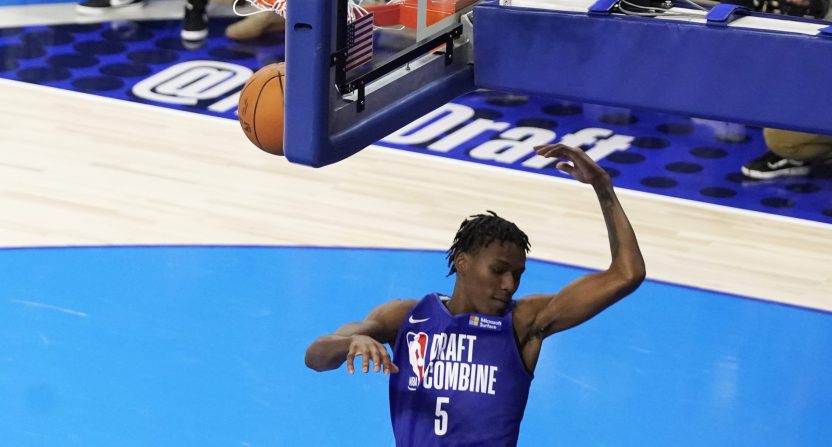 NC State Wolfpack guard Terquavion Smith was a projected first-round pick after he entered his name in the NBA Draft pool and performed well at the combine. However, he’s decided that he’d like to return to school for at least one more year before he goes pro.

“I’ve decided to play next season for NC State, the first team to offer me a scholarship,” Smith told ESPN. “I owe so much to Todd Ramasar, the agent who walked me through this process; Ross McMains, the incredible coach who prepared me so well for all I’ve just gone through, and the Life Sports Agency team. This past month has been eye-opening on so many ways. Todd, Ross, and their team helped put me on the NBA map.”

Smith has a strong showing at the NBA combine and had solid expectations to be a first-round pick. However, the sophomore told ESPN that he has his sights set higher and wants a chance to enjoy one more “normal” season of college basketball.

“I have to be honest and admit money has never been at the center of my thoughts,” he said. “My agent explained to me that teams as high as the late teens, through the rest of the first round, all have me ranked as a first-round talent. It’s exciting to hear that. But I told him I have more work to do. I like school and my college in particular. Remember, my last two years have been so strange, thanks to the pandemic. I just want one more season to get everything right and just be a college student.”

This is extremely welcoming news for Wolfpack fans. Smith averaged 16.3 points, 4.1 rebounds, and 2.1 assists en route to the ACC All-Rookie Team and an all-conference honorable mention. He led the ACC with 96 three-pointers as well.

The news that Smith would be returning to NC State garnered some big reactions from the basketball world.

After the last 12 months, Kevin Keatts needed a break. Kevin Keatts gets a break as potential first round pick Terquavion Smith announces he's coming back. Pretty much "tourney or bust" season in Raleigh this year https://t.co/GbM5XOBj0O

Huge news for NC State. If they get Dereon Seabron back, too? Kevin Keatts might finally make another tournament! https://t.co/PNZ0cCBVP7

His loyalty to NC State is unmeasurable. Committed to them at the age of 15 and shut down other schools from recruiting him. https://t.co/1FI27Whsw1