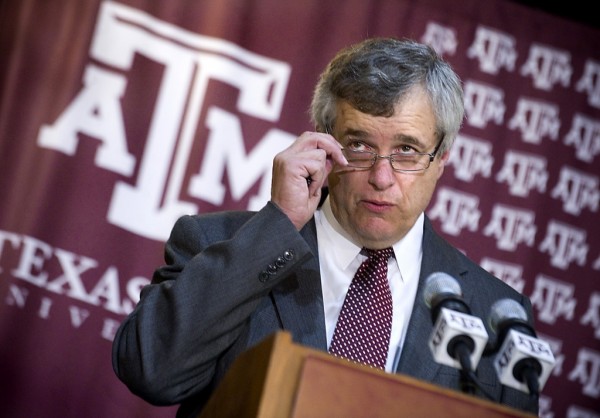 The pressure is rising in College Station for Texas A&M to start taking the next steps toward contending for an SEC championship. These expectations are not without reason as the Aggies stormed into the SEC with a magical debut that included a win at Alabama and a Heisman Trophy winner in Johnny Manziel in the first season with Kevin Sumlin leading the program. Everything fell into place for the Aggies in Year 1 in their post-Big 12 run, but increased expectations are starting to take a toll on job security for some associated with the program.

After losing two talented and highly-rated young quarterbacks to transfers just days apart before their 27-21 loss to Louisville in the Music City Bowl, the criticisms were flying left and right at Sumlin, and deservingly so after losing three starting quarterbacks to transfers in the past year. With Sumlin under scrutiny, Texas A&M Athletics Director Eric Hyman voiced his public support and vote of confidence for Sumlin by saying Sumlin will be the head coach of the Aggies in 2016.

“We’re looking forward,” Hyman said, per The Dallas Morning News. “The whole football program is moving forward. Kevin Sumlin is the captain of our ship and the future looks good. Where we are in position football-wise, we’re in a very strong position.”

That was Monday. On Tuesday, Hyman stepped down as athletic director at Texas A&M.

Hyman took on the role of athletic director at Texas A&M in the summer of 2012, and over that brief period of time the entire university and program have undergone some drastic changes. Texas A&M raised funds to do a complete overhaul of Kyle Field and the football facilities, a project everyone at Texas A&M is extremely proud of (as they should be, as detailed on The Student Section last fall). So why is Hyman out as AD?

TexAgs makes note of some issues Aggie fans have had with Hyman since taking on the job, such as a not-so-steady relationship with fans and the way he approached his job. Hyman also seemed to want to temper expectations of fans, but that is kind of hard to do when the program moves into the SEC, makes a nice splash, and invests so much money in its stadium renovations and the school pays the football coach as much as they do.

Given all of that money invested in the program, it is fair to expect more. Being better than Texas is fine, but when Baylor, TCU, and Houston have been experiencing more success recently than Texas A&M, that is a bit of an issue as well. Aggies pride themselves on being the best, and right now that simply is not the case in both the state of Texas and the SEC.

So Texas A&M will begin searching for a new AD, and it will be a key one to pay attention to. As just mentioned, Texas A&M has an immense amount of pride surrounding the university and athletics department, so having someone who can handle the pressure to succeed in a big way must be possessed by whomever takes over as AD in College Station. Texas A&M has tremendous upside potential with the right leader in place.