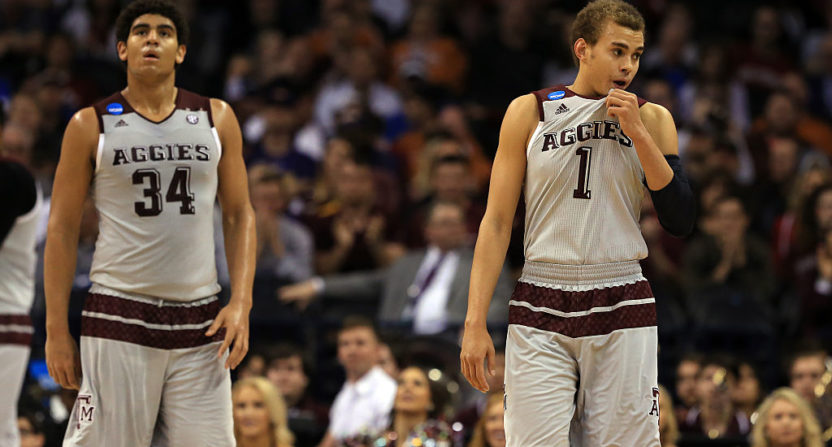 It’s time to call Texas A&M what they are: the best team in the SEC. The Aggies won their third straight game to begin the season, defeating Oklahoma State 72-55 in Brooklyn on Monday, and they now own two quality wins away from home and the No. 6 ranking in Kenpom as of Monday evening. (Kentucky is 8th and Florida is 9th.) So yes, this team that missed the 2017 NCAA Tournament and began the 2017-18 season ranked 25th in the AP Poll is legitimate.

That’s not to say there’s anything wrong with Kentucky and Florida. Both have Final Four potential. But Texas A&M has looked like a legitimate heavyweight through the first few weeks of the season while Kentucky and Florida have struggled, but survived, against mid-major foes.

The Aggies held the fourth most efficient defense in the nation entering Monday, according to KenPom, allowing an adjusted 90.3 points per 100 possessions. Their defensive prowess held true against Oklahoma State, holding an opponent known for its offensive output to 78.1 points per 100 possessions. Impressively, Texas A&M’s defensive output doesn’t require forcing turnovers; they’re actually below average in turnover rate. Instead, they force opponents into long possessions, and with unbelievable length and a trio of shot blockers they force teams to miss at an alarming rate. Oklahoma State couldn’t even crack 30 percent from the field.

Sophomore forward Robert Williams is the Aggies’ best NBA prospect as a potential lottery pick next June. He showed no rust making his season debut on Monday, posting a double-double with 11 points and 11 rebounds. He was a dunk machine with a handful of alley-oops and this demolition of 6’9″ senior Solomon Mitchell.

In the second half, he destroyed Oklahoma State star Jeffrey Carroll on the defensive end.

Now you can understand how he posted a 7.2 in defensive plus/minus last year, according to Sports Reference.

While defense — anchored by Williams — has been the Aggies’ calling card, their offense is slightly behind Kentucky and Florida’s. But they’re catching up. Junior wing D.J. Hogg has been unconscious. He’s made 13-of-20 (65 percent) from three while averaging 20.3 points per game. Oklahoma State opponents had been shooting 21.3 percent from three entering Monday, but that didn’t stop Hogg from draining four from the outside on his way to 18 points.

With freshman guard JJ Caldwell suspended for the first five games of the year, Texas A&M has displayed its backcourt depth, a trait possessed by many teams who make deep runs in March. Marquette transfer Duane Wilson has adjusted smoothly to playing alongside junior guard Admon Gilder, another Aggie who can leap out of the building.

Okay, he didn’t finish the dunk and in fact got called for a charge. But that play shows you the type of athleticism A&M is working with in its backcourt.

Getting some extra run with Caldwell out, freshman guard T.J. Starks turned in nine points, six rebounds and four assists against Oklahoma State. Once Caldwell returns, the Aggies will go four-deep in the backcourt with Hogg on the wing.

It’s only November, but because this team has looked good enough, let’s look at the implications down the road. Already, Texas A&M has a much better resume than many high-major teams put together in all of non-conference play. The only other teams on their level resume-wise with multiple quality wins are Creighton, who beat Northwestern and UCLA, and (if we’re stretching) Temple, who beat Auburn and Clemson.

And the Aggies will keep getting challenged. If they draw Penn State, that’s another Kenpom Top 50 opponent. Then they’re at No. 10 USC on Sunday and in Phoenix the following week to face No. 2 Arizona. Like just about every other team that plays on the road against USC and Arizona, Texas A&M will likely be an underdog. But don’t let that fool you. Texas A&M has already shown it can compete with the best.