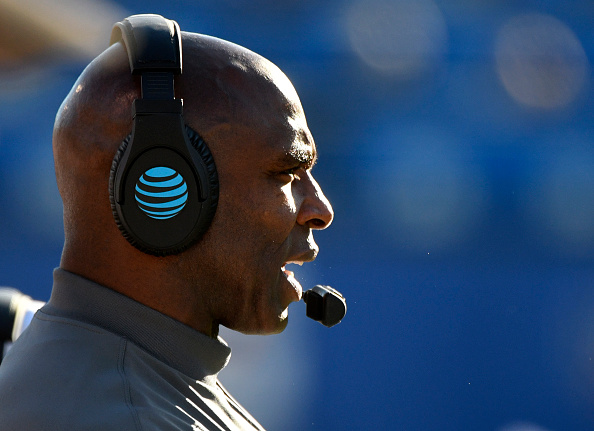 The meltdown at Texas continues, with Charlie Strong’s Longhorns falling to 5-6 following a 24-21 overtime loss to the Kansas Jayhawks Saturday. That improved the Jayhawks to just 2-9 this season, and was their first win over Texas since a 19-18 victory back in 1938.

Granted, the teams have only played 13 games since then, and didn’t play between 1938 and 1996, but that’s still a remarkable piece of history. It’s also one that doesn’t speak well for Strong and the current state of the Longhorns’ program. Given that there were already reports of “extreme pressure” from boosters to fire Strong and try to bring in Houston’s Tom Herman, it seems probable that this loss doomed any slim chances Strong had of surviving this season. Even Strong didn’t seem optimistic about his chances when he was asked “Do you know what this loss means for your future?” post-game, seeming almost ready to break down as he said “No idea.”

The most painful part of the Strong post game presser.

"Do you know what this means for your future?" pic.twitter.com/MRNuTko8au

Strong’s tenure at Texas has had some bright spots, but the overall results have been dismal. In 2014, Stong’s first season at the helm, the Longhorns strung together impressive late-season wins over Texas Tech, Oklahoma State and West Virginia, but finished the regular season 6-6 following a 48–10 thumping from TCU and then lost the Texas Bowl to Arkansas 31-7. Last year, Texas pulled off impressive upsets of #10 Oklahoma and #12 Baylor, but still went 5-7 and didn’t qualify for a bowl game.

This season has arguably been even more disappointing for the Longhorns, as many teams need a couple of seasons to start figuring things out under a new coach. The pieces seemed to be perhaps coming into place for Strong, though, given the upsets last year and the combined 310 starts among returning Texas players, third in the Big 12. The Longhorns also made a couple of big coaching changes, bringing in offensive coordinator Sterlin Gilbert and offensive line coach Matt Mattox from Tulsa. Things even got off to a great start with a 50-47 double-overtime win over then-#10 Notre Dame (although that looks much less impressive now that the Irish are 4-7) that shot Texas up to #11 in the AP poll. However, after a win over UTEP, the Longhorns fell to Cal, Oklahoma State and Oklahoma.

Following those three straight losses, Texas then recovered to beat Iowa State, but they slipped again by falling to Kansas State. Wins over Baylor and Texas Tech seemed like a bit of a step in the right direction, and even a close 24-20 loss to then-#11 West Virginia last week wasn’t too bad, but the pressure was still tightening on Strong given the overall performance and the lack of real progress. Texas’ wins this season are not that impressive, and the desire to try and land a hot candidate like Herman certainly made it seem difficult Strong would keep his job even if he won out. This win probably all but seals his doom, though; even though it came on the road in overtime, falling to Kansas (and to a Kansas team whose only other win is over Rhode Island, and who lost to Ohio, Memphis and Iowa State) seems highly unacceptable for the Longhorns. It’s especially unacceptable when you consider that they blew a 21-10 lead in the middle of the fourth quarter; that seems due for a 3-1 meme.

Firing Strong won’t be cheap, as he reportedly would have a $10 million buyout (and Texas has already spent almost $20 million on him, including his Louisville buyout). It also wouldn’t necessarily ensure immediate prosperity; most turnarounds take time, and it could take even longer with a switch from a defensive-minded head coach in Strong to an offensive-minded coach like Herman (if they’re able to lure him; lots of other schools may be trying for him this offseason) that necessitates some switches in personnel philosophy. However, Texas boosters have plenty of money, and if there was “extreme pressure” to get rid of Strong before this loss, that pressure seems likely to rise even further after it.

It’s interesting that the end for Strong could come from a loss to Kansas. The Jayhawks haven’t had much of an impact on the Big 12 since their 12-1 2007 season and run to the Orange Bowl and the 2009 firing of Mark Mangino, going 5-19 under Turner Gill (1-16 in conference), 6-22 under Charlie Weis (1-18 in conference), 1-7 under interim coach Clint Bowen (who has since stayed on as defensive coordinator) in 2014 and 0-12 under David Beaty last year. This was their first conference win since Bowen beat Iowa State in 2014; the previous one was Weis’ lone Big 12 win, against West Virginia in 2013. But Kansas may have provided the final straw here, and perhaps shown they might be headed in the right direction as well. Texas certainly doesn’t seem to be, and that will likely wrap up Strong’s tenure there.