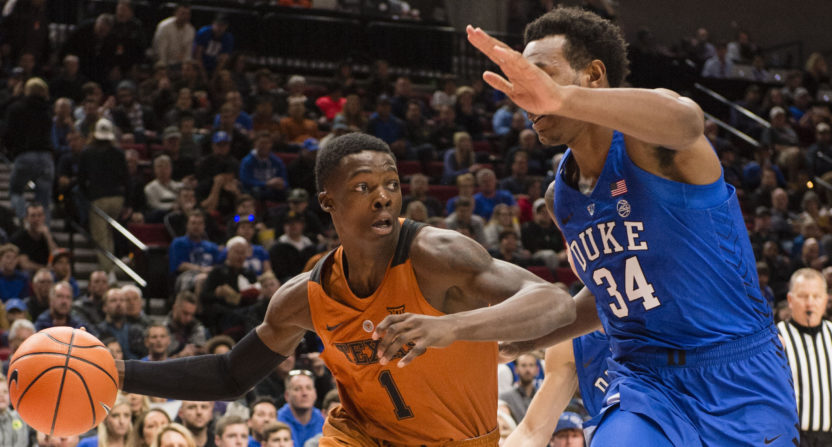 Per the Austin American-Stateman, University of Texas sophomore guard Andrew Jones has been diagnosed with leukemia.

Jones is currently undergoing evaluations and tests and will obviously be away from school and the basketball program for the foreseeable future.

Statement from the family of @UTAustin sophomore G Andrew Jones: "After undergoing a number of tests & evaluations over the past week, Andrew has been diagnosed with leukemia. He has begun treatments, and we hope everyone will keep him in your thoughts & prayers. …. (cont)

(cont) "This is obviously a difficult situation for our family, and we hope everyone will respect our privacy at this time."#LonghornNation – please keep Andrew Jones & his family in your thoughts. #TexasFamily

Statement from Coach Smart: "Speaking for our entire team & staff, we love Andrew & will do everything we can to support his family and help him get back to health. I want to thank everyone for being respectful of the privacy that the Jones family needs at this time."

Statement from @_delconte: "We know Andrew's a fighter with a strong family & our thoughts, prayers and support are fully behind them. At @UTAustin, we will do everything in our power to provide all of the resources we can to assist Andrew and his family."

Jones’ season got off to a good start, scoring in double-digits in seven of his first eight games. The sharpshooter led the team with a 46.3 shooting percent from 3-point range and seemed poised to be a focal point of the offense moving forward. However, Jones ended up missing four games in December following a fall that led a hairline fracture in his right wrist. He returned when Texas took on Kansas on December 29 but only logged nine minutes in the loss. Smart told reporters that while Jones looked winded, he just needed to get back in game shape.

However, before playing 11 minutes in a January 1 win over Iowa State, Jones had said he felt sick. After the game, Smart noted that while the wrist was healed, something was keeping Jones from getting his energy back. After some quiet days in which Jones did not travel with the team, the school made the official announcement on Wednesday.

Stay focus and let God’s plan for me take its course. Patience’s ??‍♂️

Jones averaged 11.9 points as a freshman last season and attended the annual NBA scouting combine before returning for at least one more season in college.

It’s unclear whether Jones will attend any further games this season as the focus now shifts to his health and battling the disease. The 10-5 Longhorns will shift freshman Jase Febres into Jones’ starting spot as they attempt to put their heads down and play on their teammate’s behalf. Hopefully, he’ll be able to join them back on the court very soon. In the meantime, he has the full support of the UT and college basketball communities.

All longhorn fans we all need your support for @DrewdotCash as he goes through this tough time. Say a prayer for him and his family it could simply put a smile on their face in a tough time like this. #hookem #hornsforhorns