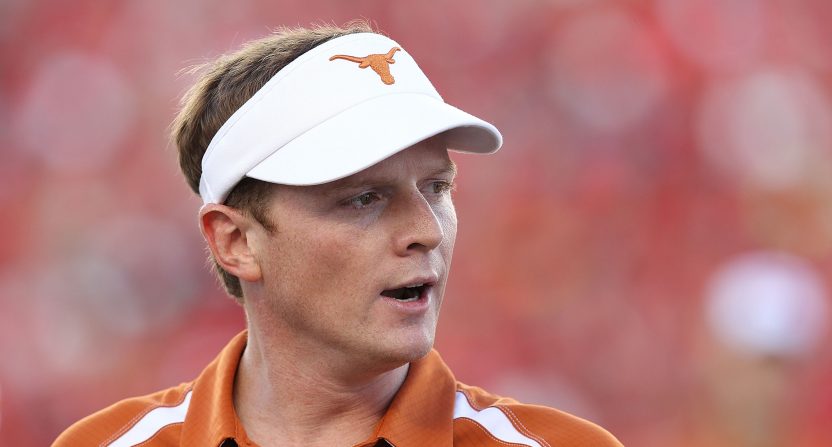 Football in Texas is king and high school football coaches around the state have a lot of sway, especially as many of them coach highly touted prospects who schools around the state and country covet. When Houston hired Major Applewhite to replace the departed Tom Herman, the move was met with acclaim across the state. But emails uncovered by SB Nation showed that privately, high school coaches statewide were lobbying for the move to be made as early as last year, and as Charlie Strong found out, you don’t want to get on the bad side of Texas high school football coaches.

Coaches from programs, no matter how strong they were and where they were located, were angling for Applewhite, a former Texas QB and assistant coach with the Longhorns to be the man at Houston. They were lobbying to the highest echelons of Houston’s athletic department; straight to AD Hunter Yurachek and president/chancellor Renu Khator.

Now while this happens all across the country with head coaching searches no matter the location, somehow it seemingly means more for schools in Texas because of how important and valued the high school game is there. But considering the connections and good, fuzzy feelings a well-liked head coach has, he may attract more players from respected programs to come to Houston.

Why does this matter? Charlie Strong did not make a great first impression to high school coaches not only on the field but by also saying he would keep Texas talent at home yet immediately recruiting outside of the state. One high school coach even went so far to describe Strong as a “horrible hire”.

“Charlie was a great man but a horrible hire,” South Grand Prairie coach Brent Whitson told Landof10.com. “You get here and the first thing you do is go to Florida for recruits. … All it did was cost him about 2,500 head coaches at Texas high schools.”

And once a reputation sticks with you, it doesn’t come unglued without a whole lot of winning, and that didn’t happen for Strong in Austin. So for Applewhite to be well respected by almost all of his peers around the state, it does give Houston confidence that they can maintain the level of the program despite losing Tom Herman to Texas themselves.

This also shows you that football coaches while being “manly men” do have quite a catty Mean Girls streak in them when they want to.