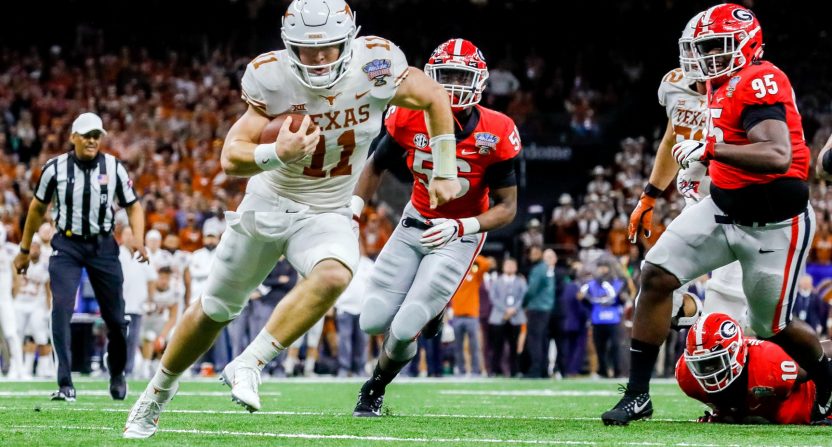 It won’t take long for the preseason stories about how the Texas Longhorns may be finally ready to challenge for a national championship next fall, after Tom Herman and Sam Ehlinger upset the Georgia Bulldogs in the Sugar Bowl on New Year’s Day. The 28-21 victory by Texas was hardly as close as the final score would indicate, and the scary thing is there may still be room for Texas to improve.

Sam Ehlinger scored three rushing touchdowns against Georgia as the Longhorns took a 10-0 lead in the first quarter and a 20-7 lead into halftime, before pushing their lead to 28-7 in the fourth quarter. A couple of touchdowns by Georgia with the game essentially all but official made the game closer than it was for the majority of the game, and Ehlinger was a big reason why. His stats may not quite impress you, and nobody would confuse the stats of the Texas quarterback against Oklahoma’s Heisman Trophy-winning Kyler Murray, but Ehlinger continued to prove why he’s the quarterback Tom Herman continues to trust running the offense for the Longhorns.

And because Ehlinger powered Texas to a big win over Georgia on a big stage, you can count on his name popping up on the way-too-early Heisman Trophy lists and odds once they start coming out. That will just be part of the offseason hysteria, because a Texas team coming off a season that saw them play for the Big 12 championship, beat Oklahoma during the regular season, and end the year with a statement win against Georgia in the Sugar Bowl is automatic content for way-too-early stories to glow over.

Texas will undoubtedly join in-state and long-time rival Texas A&M in the offseason hype race, perhaps joined by Florida and Oregon as teams that will be given preseason chances to dethrone Alabama or Clemson next season. And to be fair, each of these teams will have plenty of reasons to be excited for next season. Specifically for Texas, what’s not to like about what the Longhorns could be capable of doing next. Was the Sugar Bowl the latest example of Herman continuing to take this program forward? Absolutely.

In just two short years, Herman has begun to deliver on the promise of making Texas relevant again. It wasn’t going to happen overnight, and it hasn’t, but Texas is far closer to being a national title contender today, at the beginning of 2019, than they were when Herman first took over the program following the dismissal of Charlie Strong after the 2016 season. Herman has won back-to-back bowl games at Texas in his first two seasons. The last Texas coach to do that was Blair Cherry in 1947 and 1948. If Herman was brought to Texas to win, then he is doing it.

But what comes next for Texas? For starters, the bar has been raised for the program. Playing in January 1 bowl games is what Texas is supposed to do. A program with as many resources as Texas has available should be recruiting and developing players that will build teams capable of playing in these games regularly. The 2018 season started off with a loss to Maryland, for the second year in a row, but the season proved Texas is beginning to be different. It beat Oklahoma. It played for a Big 12 championship. It beat Georgia in the Sugar Bowl.

What’s next for Texas is winning the Big 12. Oklahoma isn’t about to step aside, of course, but the Big 12 may finally have their top two programs ready to each carry the Big 12 banner for a little while as the rivalry between Herman and Lincoln Riley continues to raise the stakes.