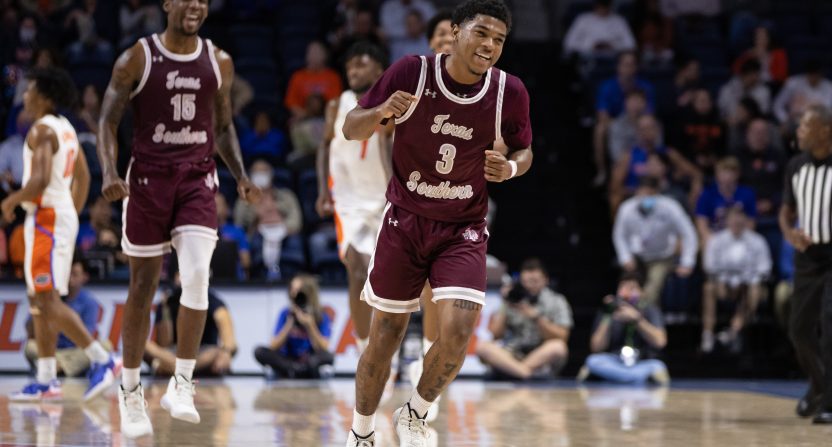 The college basketball week begins with a shocking road upset.

Texas Southern, who entered Monday 0-7, went into Gainesville and took down the No. 20 Florida Gators 69-54. It was a 20-point Texas Southern lead before the Gators trimmed the deficit in garbage time.

It was total domination by the Tigers for the game’s final 31 minutes, after the Gators held a six-point lead early in the first half. Texas Southern shot 54.4% from the field, compared to 38.2% shooting from Florida. And the Tigers doubled up the Gators on the boards, winning the rebound department 46-23.

Texas Southern was a 23.5-point underdog and entered the game ranked No. 273 in the NET.

Texas Southern, ranked 273rd in the NET and even worse in other metrics, just went on the road and beat Florida as a 23.5-point underdog by 15 POINTS. It’s their first win of the season. Reminder: This is how Texas Southern schedules in the nonconference. True @SickosCBB stuff. pic.twitter.com/nGXpq0x6y8

They become the first SWAC team to beat a ranked SEC team (going back to 1936), with the SEC being 51-0 in such games entering this one.

Via @ESPNStatsInfo: Florida becomes the first ranked SEC team in history to lose to a SWAC opponent in the AP Poll era (since 1936). Ranked SEC teams were 51-0 vs. the SWAC entering Monday.

And at 0-7, Texas Southern had the worst record that has beaten an AP-ranked team since 1980.

Now, Texas Southern was never as bad as your typical 0-7 team. They entered the game with KenPom’s No. 5 strength-of-schedule rating, having played this schedule: at Oregon, at Saint Mary’s, at Washington, at Air Force, at NC State, at BYU, at Louisiana Tech. And they lost by under double-digits in four of those games, while only losing by 20-plus once. So, with the average schedule, they would’ve probably won a few games by now.

Still, the No. 20 team in the country shouldn’t let a team like this come into their house and dominate. It’s a very bad loss for Florida that will serve as a rough blemish on their resume come March.

And on the other side, it’s a significant win for Johnny Jones and the Texas Southern program.