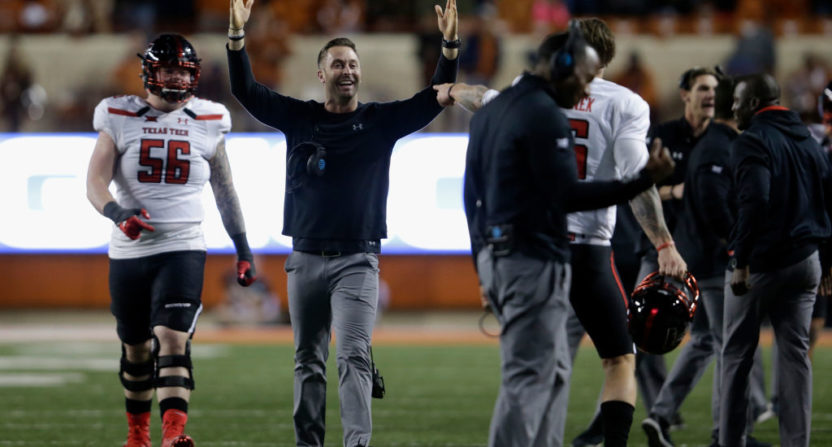 It was just a few weeks ago you could find some people, myself included, questioning whether or not Texas Tech should consider opening the discussion about a potential coaching change. Following four straight losses to slump to 4-5, it was beginning to look like an uphill climb for the Red Raiders to get to a postseason bowl game. But Kliff Kingsbury made sure these Red Raiders had their climbing boots on, and now has them heading to a bowl game for the third time in his career.

Texas Tech did what it needed to do by making key defensive plays in the fourth quarter against a Texas Longhorns program still showing glimpses of taking steps forward, only to quickly remind you there is still much work to be done in Austin by Tom Herman. On the Friday after Thanksgiving, the Longhorns failed to protect a lead in the fourth quarter and gave Texas Tech life when it was mere yards away from possibly slamming the door shut on their opponents from Lubbock.

Sam Ehlinger’s pass was picked off by Justis Parker and returned to the Texas 14-yard line with 2:06 left to play.

After Texas officials and the replay booth decided for the first time all night to not draw the game out any longer by skipping over an obvious targeting penalty (seriously, the replay booth was busy all night on plays much less in need of a full video review), Nic Shimonek made up for it by connecting with Cameron Batson for a go-ahead touchdown.

Texas still had one more chance with the football, but for the second offensive series in a row, Ehlinger was intercepted, allowing Texas Tech to run out the clock and celebrate a bowl eligibility-clinching game in Austin.

Kliff Kingsbury is the first Texas Tech coach in history to win back-to-back trips to Austin.

Kingsbury may not have actually been on a hot seat, but he most certainly will be off it for a while given this run and success against Texas. But getting to bowl games is typically the bar for success at Texas Tech more often than not. The bar is still set considerably higher at Texas, but this season has shown that Texas has to gradually work their way back up to that level of respectability.

Texas has missed the bowl season each of the past two seasons, and one more loss in a bowl game this season would mean Texas ends its fourth-straight year with a loss. We’ll see where Texas is going bowling with a record of 6-6, but the idea that Tom Herman was going to instantly flip a switch with this program and give it a kickstart to do what Charlie Strong was incapable of doing has now been firmly disproven. But Herman has known this would not happen overnight, and he has attempted to stress that concern with anyone who would listen.

Texas will see better days, but the 2017 season has been another year to plant the seed to grow a successful program that can go toe-to-toe with the likes of Oklahoma. The Longhorns once again failed to hold on to a lead late in the game, just as they did earlier this year against USC, Oklahoma, and Oklahoma State. Texas is getting close but has to find more ways to close out games.