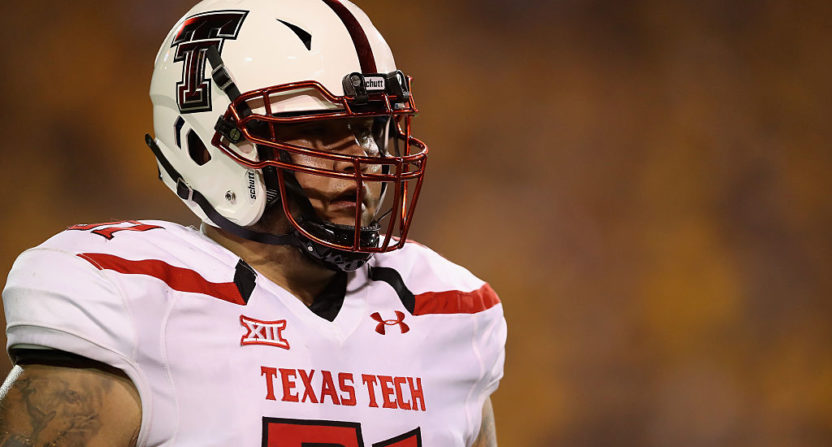 Call him college football’s Van Wilder. Texas Tech center Tony Morales is hoping to get an eighth year of eligibility approved by the NCAA.

Morales is already going into his seventh season of college football this fall, itself a bit of a rarity in collegiate sports, and he is already contemplating applying for a chance to play an eighth season. Texas Tech will help him with that process if he decides at the end of the season to roll the dice with the NCAA and see what they say.

Via the Lubbock Avalanche-Journal:

“I worked too hard for too long,” Morales said last October, frustrated with his injury history since enrolling at Texas Tech all the way back in 2011. “I didn’t rehab for four years to turn down eligibility.”

Morales has been sidelined by three separate surgeries for a pair of shoulder surgeries (one surgery for each shoulder) and a torn ACL. On top of that, Morales has also had a knee injury that did not require surgery, but all four injuries have cost him a football season. He is one of college football’s unluckiest players when it comes to catching the injury bug.

In 2015, Morales and Texas Tech applied to the NCAA to receive extra time for eligibility, and the NCAA granted him two additional seasons as a result. Having gone through so much adversity just to play football, Morales has developed into a leader that can help Texas Tech, which has not gone unappreciated by head coach Kliff Kingsbury.

“He’s a good leader. He’s been around a long time,” Kingsbury said to the Avalanche-Journal. “He’s doing great in grad school. So proud of him and he’ll continue to compete.”

To keep things in perspective on just how long Morales has been hanging around Lubbock, Tommy Tuberville was the head coach of the Red Raiders in 2011. He has since moved on to coach at Cincinnati and is now retired. Also, the BCS was still the championship model used in college football. Also in 2011, Texas Tech could call Texas A&M and Missouri conference opponents. Both are now in the SEC.

Morales is just a model of consistency, and he’d like to keep it that way for at least another year.