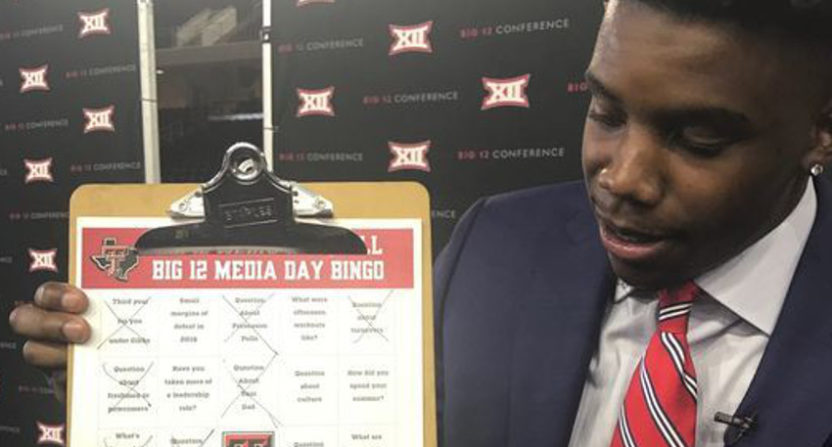 There’s been plenty of commentary on media members’ tendencies to ask predictable questions, and that’s perhaps most notable at a conference-wide season preview event. There tend to be a number of recurring themes in preview questions, and it can be hard to come up with original ones, especially if you’re a media member who doesn’t regularly cover the player or the team in question. Texas Tech junior safety Jah’Shawn Johnson fully anticipated this, working with teammates and the school’s media relations staff to create a bingo card of likely questions in advance of Monday’s first day of Big 12 Media Days. And boy, were they ever right; as per a tweet from the Red Raiders’ account, Johnson was able to cross off 20 of the 24 squares (not including the free center one) and make five separate bingo lines:

Thanks to the media (& Jah'Shawn) for a great day of playing along! We'll have more on this tomorrow. #WreckEm #Big12FB pic.twitter.com/4icWSIcCdr

Granted, this wasn’t all in one session; Dan Wolken of USA Today writes that Johnson had 12 of 24 squares crossed off by lunch. And that doesn’t mean that journalists were wrong for asking all of these questions, as even a predictable question doesn’t always make bad copy. For example, the questions about how the Texas Tech defense can improve and if head coach Kliff Kingsbury’s role with it has increased could be relevant; the Red Raiders have long struggled with poor defensive play, and so it could be interesting to find out what their plans are to change that in 2017. (There are better, more specific and more unique ways to ask that, but the base idea here isn’t wrong.)

Still, while a bingo like this is mostly fun, it could also perhaps provide a bit of a lesson for journalists. It’s not just snarky bloggers and media types who are tired of poorly-constructed, overly-general and overly-obvious questions. At least some of the athletes you’re covering are finding them predictable too, especially at events like these Media Days, and they can be especially frustrating in that context when they get the same questions multiple times. Maybe it’s worth thinking about how to ask unexpected questions, or how to at least make a more-standard question a bit more interesting than some of the phrasings here. And maybe it’s worth thinking about how not to wind up on a bingo card like this.