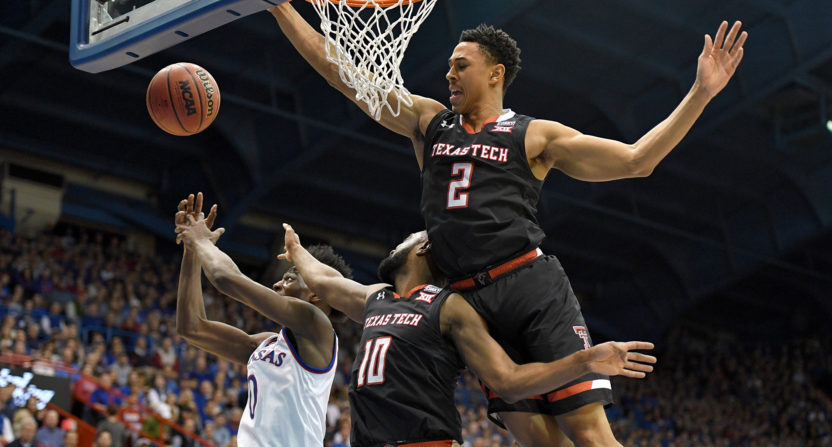 Kansas has won at least a share of 13 straight Big 12 titles, and we’ve reached a point where any article like this one that discusses the possibility of that streak ending will probably look like nonsense by the end of February. Nonetheless, Texas Tech added some doubt to this year’s title race with an 85-73 win over Kansas at Allen Fieldhouse.

Not many teams win in The Phog. Iowa State won a tight, overtime contest last year. The last Big 12 team to win there before that was Marcus Smart’s Oklahoma State team during the 2012-13 season. While Texas Tech’s victory is a major accomplishment for a program that had never before won at Kansas, it’s also a sign that Kansas may be weaker than in previous years.

The Jayhawks have now fallen in two of their last three home games overall going back to December’s loss to Arizona State. According to ESPN Stats & Info, that’s equal to the number of losses they suffered in their previous 71 games in their home arena.

Kansas is now 0-3 in home games vs major conference opponents this season.

It was 101-3 over the previous 10 seasons combined pic.twitter.com/tDvB1yzL08

The Jayhawks are vulnerable. They don’t have much size or depth, and they’ve continued to rely way too heavily on the three ball. In Tuesday’s loss, 26 of their 55 field goal attempts (47.3%) were from beyond the arc. In a strong league that also features Oklahoma with its sensational point guard Trae Young and West Virginia with its havoc-wreaking defense, Kansas is facing the most competitive Big 12 since at least the 2014-15 season.

But enough about Kansas, because Texas Tech deserves some praise for its arrival as a national contender in 2017-18. The Red Raiders have arguably the best defense in the country, leading Division I in raw efficiency and ranking No. 3 in adjusted efficiency. Skilled shotmaker Keenan Evans and freak athlete Zhaire Smith lead an offensive attack that could hold its own even without a dominant defense as backup.

Entering conference play, advanced stats guru Ken Pomeroy predicted Kansas’ streak would end, giving the Jayhawks only a 47 percent chance of winning the league title. Still, Kansas was the favorite, ahead of West Virginia and Texas Tech at 22 percent each.

That changed Tuesday after Texas Tech’s victory. The Red Raiders rose to No. 5 in KenPom’s rankings, and they’re now projected to win the Big 12 outright by one game over Kansas and West Virginia.

No matter what the numbers say, it’s tempting to avoid discussing the streak until the final standings show someone other than Kansas in first. You don’t win 13 straight titles by accident, and Self still has 16 games to coach this team back to the top.

But Chris Beard is a wizard. He inherited a 13-18 team at Little Rock and won 30 games in his first year, including a stunning NCAA Tournament win over Purdue. Beard had better pieces to work with when he arrived at Texas Tech in 2016, and after some close losses kept them off the NCAA Tournament radar last year, now he has one of the best teams in college basketball and what appears to be the best Texas Tech team in at least 22 years.

Who knows how the standings will look two months from now? But for the first time in a long time, it looks reasonable that someone other than Kansas will win the Big 12, and Texas Tech has emerged as the top challenger.