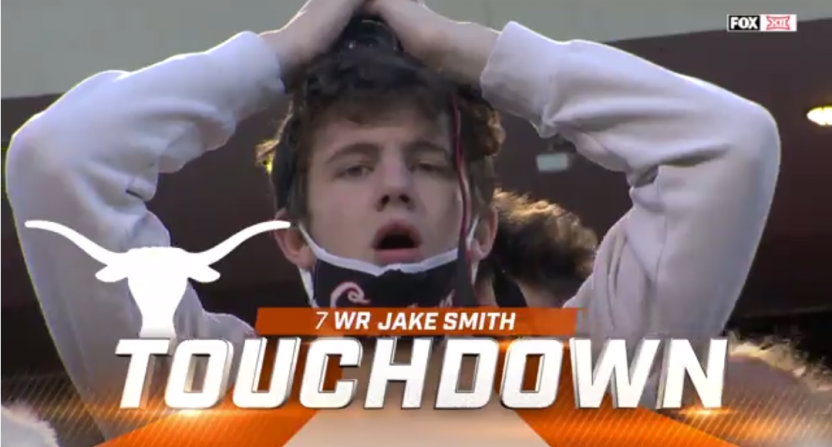 In a game full of fitting colors on Halloween, it was the burnt orange of the Texas Longhorns that topped the orange-and-black of the No. 6 Oklahoma State Cowboys in a 41-34 upset victory in Stillwater.

Oklahoma State led by as many as 11 in the second half, and took a five-point lead into the final five minutes of regulation, but Texas quarterback Sam Ehlinger rolled out to avoid the blitz and connected with Jake Smith for a go-ahead touchdown on 4th-and-7. It was the Longhorns’ second fourth-down conversion on the drive (actually the third fourth-down “conversion” of the drive if we include a roughing-the-kicker call on a 4th-and-22).

Texas takes the lead over No. 6 Oklahoma State on a 4th-and-7 TD pass from Sam Ehlinger to Jake Smith. pic.twitter.com/oHQYC2xxpJ

In overtime, Ehlinger threw a 15-yard touchdown pass to Joshua Moore on the opening drive. Oklahoma State go their chance on offense, but Joseph Ossai sacked Cowboys quarterback Spencer Sanders on 4th-and-8 to end the game.

Here was the Longhorns' stop on 4th-and-8 to secure the huge victory: pic.twitter.com/jMEb7PLtFq

What would serve as the game-winning touchdown for Texas came on this 15-yard strike from Sam Ehlinger to Joshua Moore. pic.twitter.com/69Ry3o8kTO

The Longhorns also got a big touchdown through special teams, with this 100-yard kickoff return to the house from D’Shawn Jamison in the third quarter:

When Texas needed it most … 100 yards to the HOUSE 🏡 pic.twitter.com/vvwCRRMqV6

Ehlinger has been an outstanding duel-threat quarterback in his senior season for Texas, throwing for 20 touchdowns and adding seven touchdowns on the ground. He’s the first quarterback in Texas history to have 20 passing touchdowns through six games of a season, and he’s particularly been productive late in games.

Sam Ehlinger is the first player in Texas history with 20 passing touchdowns through his team's first 6 games of a season.

And it’s the Longhorns’ first road victory over a top-10 team since they took down No. 5 Nebraska in 2010.

The last time Texas beat a Top 10 team on the road came in 2010, when they beat No. 5 Nebraska. pic.twitter.com/z21KsjjgHJ

As for Oklahoma State, this is a big hit to their College Football Playoff chances, and now they have consecutive games against ranked teams on the road (No. 16 Kansas State, followed by No. 24 Oklahoma).