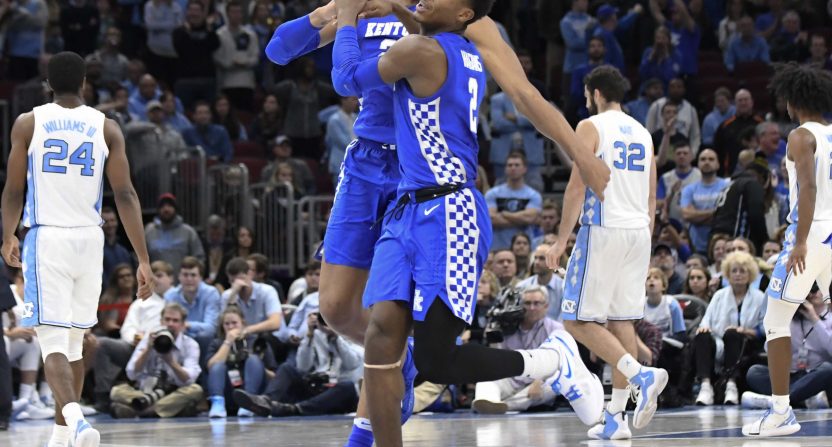 We’re getting down to the wire on 2018, which means the non-conference portion of the college basketball season is winding down and it’s almost time to get those rivalries going. However, before we say goodbye to 2018, we’ve still some great college basketball to play. The waning days before conference play aren’t filled with all mismatches and cupcakes, there are actually some important games to pay attention to before the New Year with potential NCAA Tournament implications. Here are six you’ll want to keep an eye on before flipping the calendar.

We’re not even in 2019 yet and we’ve already got a rematch on our hands. The TCU Horned Frogs defeated the Indiana State Sycamores 90-70 on December 16. Less than two weeks later, the two squads are meeting again in the championship game of the Diamond Head Classic in Honolulu. While the first meeting was a blowout, there’s a reason to believe the second game won’t follow suit. This time they’ll be squaring off on a neutral court and the Sycamores, one of the best three-point shooting teams in the nation, racked up the points in their early tournament wins over Colorado and UNLV. This’ll be a good barometer for both teams as they prepare for conference play.

The No. 14 Tar Heels are coming off of a loss to Kentucky and looking to rebound. They probably could have asked for an easier opponent than Davidson. No. 81 in Kenpom, the Wildcats are on a bit of a backslide themselves, losing two of their last three, but they’re still very capable of running with the big dogs and can put up points if they need to, crossing the 90-point threshold twice this season. Davidson is also one of the favorites to come out of the Atlantic-10 right now. A win over North Carolina could not only send shockwaves across the sport but also set up their NCAA Tournament resume early.

One of the strangest match-ups between these two in-state rivals in a while. The Cardinals are in the first year post-Pitino and seem to have kept things on course, but have yet to prove they can hang with the top teams in the nation. Kentucky, meanwhile, had a lot of people wondering if they were falling off until they topped North Carolina and reminded everyone they’re Kentucky. Kentucky might be the more talented squad but the fact that this one’s in Louisville makes it more interesting. Chris Mack could officially put his stamp on the program with a win here.

Road blacks for the first time this season. And we are off. pic.twitter.com/BJKPh5HJu3

Somehow, we’ve got yet another non-conference rematch before 2018 is over. The two teams met in the fifth-place game at the Battle 4 Atlantis, with Kamar Baldwin scoring 19 points to lead Butler in the victory. Since then, the Bulldogs have only dropped two games (including a buzzer-beating loss to Indiana). Meanwhile, the Gators stumbled against Michigan State but have otherwise taken care of business. This second meeting has become a battle of two teams lurking just outside the Top 25 looking to solidify their NCAA Tournament resumes.

It’s still early but the Belmont Bruins are the driver’s seat when it comes to the Ohio Valley Conference. Aside from an upset loss to Green Bay, they’ve handled every other challenge, even if they haven’t faced too many titans. Purdue’s 7-5 record might not seem impressive but the team has been facing a murderer’s row of a schedule. Their No. 19 Kenpom ranking attests to that. The Bruins seem to be in need of a good challenge to find out how good they are and the Boilermakers seem to need a quality win for their resume. One of them is going to get what they need here.

Just how good is 12-0 St. John’s? The Red Storm has fattened up on a fairly terrible schedule so far (344 in Kenpom) so it’s hard to tell if their record reflects the quality of the squad. We’ll have a much better idea after they visit Seton Hall on the 29th. The Pirates might have a few losses but they’ve challenged themselves a bit more and even have a win over mighty Kentucky to show for it. After a slow start, they’ve put together an impressive run, winning eight of nine, and making a case as one of the top teams in the Big East. We’ll know where each of these teams stands a bit better after this one.