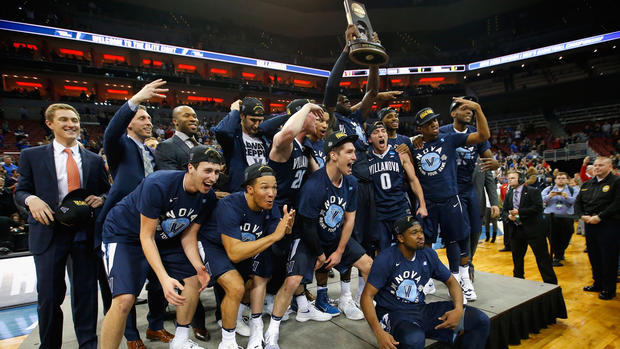 The Villanova Wildcats know what the Kansas Jayhawks are feeling on Saturday night in Louisville, but they’ll still revel in their accomplishment.

They damn well deserve to.

Kansas and Bill Self have turned in yet another conference championship season, excelling for the better part of four months, only to fall short of the Final Four. Everyone knows what the prize is in college basketball, and yet again, Self and KU will come away empty despite all the games they won, all the obstacles they overcame.

Villanova’s cup finally runneth over once again. For Jay Wright and a veteran group which had suffered many March losses as a family, it was long past time.

In 2014, Connecticut and Shabazz Napier stuck a dagger in the Wildcats’ hearts in Buffalo.

In 2015, Cat Barber and the rest of the North Carolina State Wolfpack turned Villanova into a jump-shooting team, and not enough shots fell for the Cats in Pittsburgh.

In one specific respect, Villanova set itself apart in college basketball over the past three seasons. VU was able to become a top-2 NCAA tournament seed each year: 2014, 2015 and 2016. Virginia replicated the feat. So did Villanova’s opponent on Saturday, the Kansas Jayhawks. The winner of this game was going to shed a ton of baggage. The loser was going to suffer a wrenching defeat.

That’s the cruelty of the bracket. One of these programs had to lose.

The small margin carried the Cats to their first Final Four since 2009, the second in coach Jay Wright’s tenure. Next Saturday, in one national semifinal, Wright and Oklahoma’s Lon Kruger will both make their second Final Four appearance. The winner will go to his first national championship game.

In Houston, one can expect a battle every bit as ferocious as this Villanova-Big 12 brawl in the Commonwealth of Kentucky. 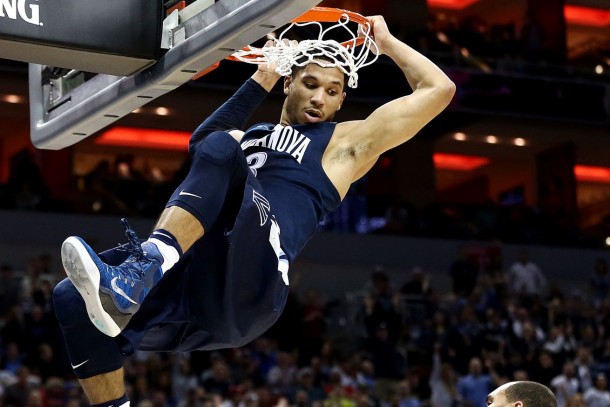 This was not a pretty portrait of a basketball game. This was trench warfare all the way, a gird-your-loins defensive slugfest bursting with ceaseless intensity and ravenous energy. Neither team found a comfort zone on offense for more than a few possessions at a time, and that’s because both teams stood in the other’s grill, standing firmly in the path of both the ball and the rim.

Villanova’s effort plays marked this game from start to finish. Just allow them to unfold in sequence:

What's the matter with Kansas?

KU under glass… and Nova on it.

Whether they hounded Kansas ball-handlers at the top of the key, or smothered Perry Ellis in the paint, or bothered Wayne Selden on a night when he couldn’t find his shooting stroke, the Wildcats established territorial superiority on defense. No player embodied this supremacy more than Daniel Ochefu, the lonely paint patroller whose skill set wasn’t adequate enough to carry Villanova through previous NCAA tournaments in which the Wildcats relied too much on their jump shooting and their offense.

This time, Ochefu became the complete low-post player Villanova needed. His at-the-rim denial (shown in one of the clips above) and a deft lefty half-hook (not shown above) spurred the 10-0 Villanova run which turned a 45-40 deficit into a 50-45 lead midway through the second half, offering the No. 2 seed the leverage it needed against the Jayhawks, the No. 1 overall seed in the tournament.

Ochefu was Villanova’s most valuable player on Saturday, but unlike the day’s first regional final — in which Buddy Hield so obviously carried Oklahoma to the Final Four — this game was more about a team than any solo flyer.

Ochefu stood out, but his teammates — Ryan Arcidiacono, the record-holder for most games in a Villanova uniform; Josh Hart; Kris Jenkins; and freshman Mikal Bridges — were just as instrumental in leading the Wildcats to the South Regional championship. Every tenacious Villanova defender blasted to smithereens the idea that the Cats’ Final Four hopes were done the moment the Selection Committee shipped VU out of Philadelphia and the East Regional.

On the play which sealed Nova’s 64-59 win, how fitting it was that Arcidiacono — the longest-tenured player on the team — and Bridges, the freshman thrown into the cauldron of Elite Eight pressure, teamed up to stop Kansas’s last possession:

Villanova in the house.

Kansas fought well on a day when perimeter shooters other than Devonte Graham (5 of 9 on threes) went 1 of 13 from 3-point range. That, and a four-point game from Perry Ellis, didn’t figure to win for KU.

Yet, there the Jayhawks were at the very end, given a chance to tie despite a poor offensive showing. Their defense and perseverance kept them in the hunt.

The difference: Villanova matched Kansas’s defense and came up with late-stage offensive rebounds while knocking down its high-leverage foul shots to close the sale.

The Wildcats played in a bigger and deeper Big East in 2009, the last time they reached the Final Four under Jay Wright. The Big East might be smaller now, but its champion finally showed that it was able to beat the best in the crucible known as the Elite Eight.

Villanova won’t have to hear the nattering nabobs of negativism this year.

The Wildcats have earned that piece of long-term Philadelphia freedom.