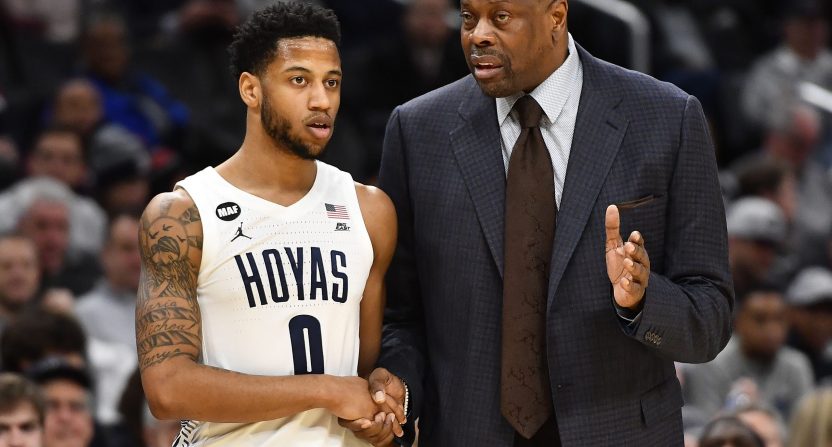 In front of a sellout hostile crowd, the large and easily noticeable figure of Patrick Ewing walked onto the floor of Hinkle Fieldhouse. Ewing didn’t have his top two scorers available due to foot injuries. So, he seemingly had very little chance to win at Butler. But unpredictable things can happen in February during the college basketball season.

No Mac McClung (16.4 ppg). No Omer Yurtseven (16.3). No problem. Ewing walked out with arguably the biggest victory of his career at Georgetown. The Hoyas pulled off 73-66 upset over then-No. 19 Butler. Another wild day in college basketball. Another day in the Big East.

The Big East might be as good as it has been since conference realignment forced it into its current configuration of 10 schools. Eight are in contention for NCAA tournament bids. Since the inaugural season of the current configuration in 2013-14, the record number of bids is seven set in 2017. If the Big East gets eight, it could have the highest percentage of teams in the field, possibly second to the Big Ten which is gunning for 11 of 14.

The Big East is a league that’s still evolving. When the Big East ditched football in favor of returning to its basketball-first roots, there were some concerns about how the conference would fit into the modern landscape. Villanova helped give the revamped league credibility with national championships in 2016 and 2018. The return of UConn to the conference this fall will help.

But for the Big East to build momentum, it would help to see other programs make deep runs. The closest school not named Villanova to almost reach the Final Four was No. 11-seed Xavier in 2017, when it lost to top-seed and national runner up Gonzaga in the Elite Eight 83-59.

This season, the Big East isn’t just Villanova and bunch of other schools. Seton Hall, with four returning starters, was the preseason favorite. That snapped a streak of five straight years of Villanova leading the conference’s preseason coaches’ poll.

“I don’t know if I said I was looking forward to it. I said it was going to happen,” coach Jay Wright told The Philadelphia Inquirer. “I liked it better the other way, but you knew it was coming, and this league’s incredible.”

Seton Hall sits atop the standings, but its lead is only one game in the loss column after setbacks to Creighton and Providence. The Pirates, looking for their first Big East title since 1993, are trying to fend off Creighton and Villanova. Creighton is the hottest team in the league, having won eight of nine, including victories at Seton Hall, at Villanova, and at Marquette. Creighton, Xavier, and Butler joined the Big East in 2013-14. The Bluejays are looking for their first Big East crown.

“We’re right where we need to be,” coach Greg McDermott told the Omaha World Herald earlier this month. “Now we just need to carry this momentum into the second half of league play.”

Greg McDermott has Creighton peaking at just the right time. Won 8 of their last 9 and sit in 2nd in the Big East. Have 3 of their last 4 at home, including a showdown with Seton Hall.

For a while, Butler — picked to finish eighth in the conference — looked to be the best team. The Bulldogs started 15-1, 3-0 and were ranked as high as No. 5. But they have come back to earth. And you can’t count out Marquette, which has the nation’s leading scorer in Markus Howard (27.3).

But outside the conference title contenders, the strength of a league is defined by its depth. That brings us back to Georgetown, once the most recognizable brand in the Big East. The Hoyas were an intimidating force in the 1980s, winning the 1984 national championship behind center Patrick Ewing and legendary coach John Thompson. Hoya Paranoia reigned in the 80s and continued into the 90s until the program lost its way.

The Hoyas haven’t been nationally relevant in seven years. The program hasn’t been the same since Florida Gulf Coast dunked on them in the 2013 NCAA tournament, becoming then just the seventh No. 15-seed to upset a No. 2.

John Thompson III got the program back to glory briefly with a Final Four trip in 2007. But the Hoyas returned to mediocrity, prompting a coaching change. Ewing, the greatest player in Georgetown history, is in his third year back at his alma mater. This has been his most successful season despite four players transferring out.

The Big East needs Georgetown to be nationally relevant again. Perhaps Saturday’s win at Butler is another small step towards that goal.

“Coach Thompson always talked about the junkyard dog – having a junkyard dog mentality,” Ewing said after just his team’s second conference road win of the year. “No matter what the adversity is, you scratch, you claw, and be able to come away with a win. And I think that’s what we’ve been doing. Not just today but all year.”