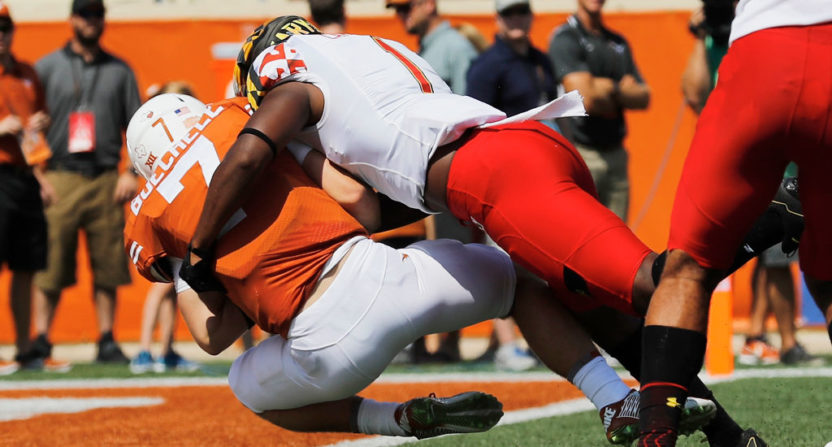 With the books closed on the opening week of college football for the Big Ten, the conference has reason to feel mighty good about the overall strength of its league. With a small sample size to evaluate, the Big Ten turned in one of the more encouraging opening weekends of college football by putting together an overall record of 10-2, and the conference appears poised to get four teams in the top 10 of the rankings this week, with at least one newcomer to the top 25 if the voters see it fit.

The Big Ten had three top 10 teams win by wide margins with No. 2 Ohio State putting together a strong second half in conference play on the road Thursday night for a 49-21 win, No. 9 Wisconsin following a similar trend against Utah State on Friday night in a 59-10 victory, and No. 6 Penn State pitching a 52-0 shutout at home against Akron on Saturday. That same day, No. 11 Michigan dominated No. 17 Florida 33-17, allowing just three points to be scored by Florida’s offense.

All four teams will likely be ranked in the top 10 this week, with Michigan making a case to move up a handful of spots. One potential newcomer to the top 25 this week could potentially be Maryland, who spoiled the debut of Tom Herman at No. 23 Texas in impressive fashion. With Texas about to fall out of the rankings, Maryland could take their place as a result.

The conference avoided having any teams upset, including Iowa putting their defense to work to shut down Wyoming and the highly-touted NFL Draft prospect Josh Allen. The only two blemishes on the record this week came from two of the bottom feeders in the conference last year, Rutgers and Purdue, but came in losses that were much more competitive than anyone would have predicted.

Rutgers gave defending Pac-12 champion No. 8 Washington a strong battle at home until the Scarlet Knights appeared to run out of steam and the much deeper and more athletic Washington Huskies pulled away in the second half of a 30-14 victory on Friday night. On Saturday night in Indianapolis, Jeff Brohm made his Purdue coaching debut against No. 16 Louisville and the reigning Heisman Trophy winner, Lamar Jackson. And Purdue made Louisville earn a tight 35-28 victory that was back and forth from the start. Even in defeat, there were encouraging signs from both Rutgers and Purdue against two teams of high quality.

This was also the first time the Big Ten operated games on Thursday and Friday nights as part of the regular season schedule, and it could not have picked a better week to implement that controversial scheduling method. The Big Ten got to showcase its brand three straight nights, and had positive results across the board, even in defeat. Better yet, the Big Ten’s 10-2 mark in non-conference play all came against FBS competition.

The SEC is off to an 11-1 start to the opening week with two games to play, including No. 1 Alabama’s victory over No. 3 Florida State Saturday night in Atlanta. But the SEC also picked up three of those wins against opponents from the FCS.  To the credit of the SEC, they did go 2-0 against the ACC, which had been placed atop the conference ranking pedestal by many going into 2017 after a wildly successful 2016.

This week, the Big Ten will get a couple of cracks at the ACC too. Penn State will host Pittsburgh, who needed overtime to avoid a disaster at home against Bo Pelini and his Youngstown State program Saturday afternoon. Northwestern will travel to Duke for what should be a competitive game. And Indiana will make the trip to Charlottesville to play Virginia, who showed some positive signs in a home opening win against William & Mary.

The Big Ten also goes head-to-head next week against the Big 12 (Ohio State hosting Oklahoma, Iowa visiting Iowa State) and the Pac-12 (Minnesota travels to Oregon State, Nebraska visits Oregon). So as good as Week 1 was for the Big Ten, it must keep that momentum going next week to hand out losses to three more rival conferences to establish credibility and support the strength of schedule argument down the road. If the Big Ten turns in a mediocre Week 2 as a conference, then any talk about the success of Week 1 will be tossed aside.

And while the Big Ten has those opportunities to build credibility next week, the SEC will be taking on seven more FCS opponents.