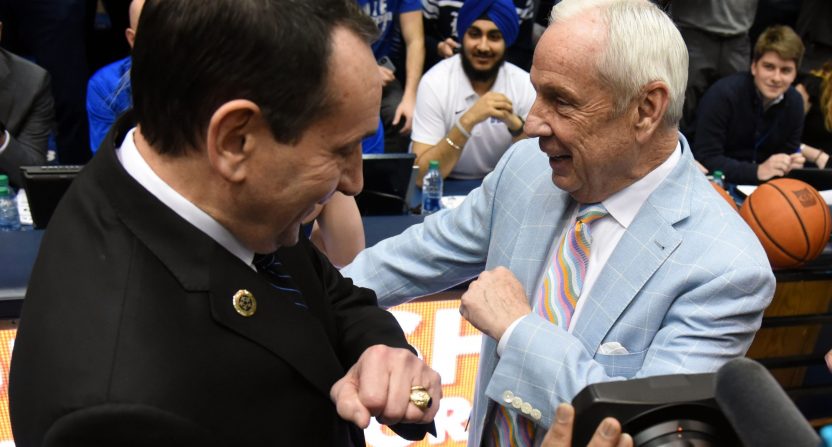 They don’t make college basketball coaches like they used to. That’s not myopic nostalgia. It’s a stark reality. With the immediate retirement of Roy Williams and pending retirement of Mike Krzyzewski after the 2021-22 season, two more iconic coaches are vanishing.

Williams and Krzyzewski were brand names. Even those who paid only casual attention to college basketball knew who they were. They rose to prominence over decades to become powerful and recognizable. People loved them. People hated them. People tuned in to watch them.

Now that Williams is gone and Krzyzewski is going, who are the faces of college basketball? A major void may be looming. Tom Izzo, Bob Huggins, Rick Pitino, and Jim Boeheim are past retirement age. John Calipari, Jay Wright, and Bill Self are closing in on it.

Brad Stevens and Billy Donovan were supposed to carry the torch for college basketball into the future. Big names known across the landscape. That (surprisingly) hasn’t happened.

But both left for the NBA, and it doesn’t look like either is coming back.

Stevens, every college fan’s dream hire, spent eight years coaching the Boston Celtics before being kicked upstairs last week to replace the retired Danny Ainge as President of Basketball Operations. Donovan, the most successful active coach currently not working in college, will start his seventh NBA season this fall and is on his second team (the Chicago Bulls).

Some speculated that Stevens and Donovan were biding their time to take over Duke and North Carolina. That certainly would have provided a much-needed jolt of electricity to the college game. Stevens vs. Donovan would have been an amazing Tobacco Road rivalry. Instead, Duke and North Carolina kept it within the family and promoted assistants Jon Scheyer and Hubert Davis.

Scheyer and Davis might turn out to be fantastic. Right now, they’re unknowns.

So where does that leave the NCAA? There have been many successful coaches, but none in recent years have truly captured our imaginations – yet. Sometimes it takes more than winning to stand out. Having personalities that resonate with the public and sell the game matters.

Baylor’s Scott Drew and Virginia’s Tony Bennett have won the past two NCAA titles. But if you don’t follow college basketball regularly, you probably wouldn’t recognize them on the street. Gonzaga’s Mark Few and Texas’s Chris Beard could win the next two championships, but they might as well be in the witness protection program.

Of course, that’s who they are today. Maybe that will change. And there are others who could emerge. Guys like Arkansas’s Eric Musselman, Alabama’s Nate Oats, and Michigan’s Juwan Howard have moxie. The Hurleys, Bobby and Dan, have a famous last name.

The best bet to become a breakthrough star might be Howard. The 48-year-old is already well-known from his playing days as a member of Michigan’s Fab Five. In a short span of time, Howard has become one of the most respected names in the sport. He was named Big Ten Coach of the Year in just his second season, leading the Wolverines to a regular-season conference title. Michigan reached the Elite Eight and might have made it to the Final Four if not for an injury to forward Isaiah Livers.

But Howard is also rumored to be a hot NBA candidate. If he bolts to the pros, where he spent several seasons as an assistant, that would be a blow to college sports.

There was a time when some of the most prominent names could fit in one conference, like the old-school Big East with John Thompson (Georgetown), Lou Carnesecca (St, John’s), and Jim Boeheim (Syracuse). Only Boeheim, 76, remains- and Syracuse isn’t even in the Big East anymore.

In college basketball, the focus has always been on coaches because the players come and go. Williams and Krzyzewski were on the sidelines for decades. The great players they mentored were only there for a handful of years. Often less.

Today, coaches don’t stay at one school long enough. Krzyzewski started at Duke in 1980. He didn’t reach the NCAA Tournament until his fourth season. If his successor, Scheyer, misses the NCAA Tournament over his first three seasons, he’ll probably be fired.

The pressure to win has never been greater. When Boeheim and Izzo leave, that will close the book on an era. They might be the last major-conference coaches who are at the same school for 30 years.

The glory days of the iconic coach are gone, and they’re not coming back.