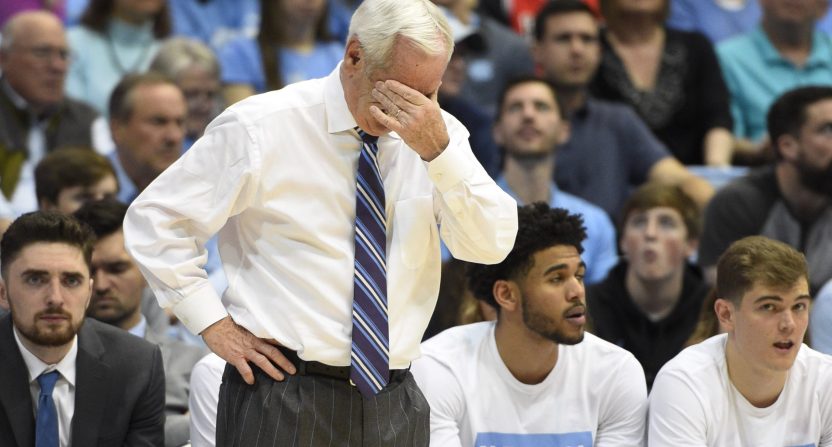 This was supposed to be a rebuilding year under first-year coach Mike Young. Buzz Williams, who led the Hokies to three straight NCAA tournament appearances, is now at Texas Tech. The roster was depleted by departures, most notably Kerry Blackshear, Jr. leaving for Florida. Virginia Tech was picked to finish second-to-last in the league, behind only Wake Forest. But Young, the former longtime Wofford coach, has done a nice job of building on the fly. The Hokies upset then-No.3 Michigan State in Maui. Redshirt freshman forward Landers Nolley scored 30 in the season-opener against Clemson, the fourth-most points scored by an ACC freshman in his debut. He’s fourth in the league in scoring (17.4).

North Carolina is banged up. Seven different Tar Heels have missed time due to injury. Star freshman guard Cole Anthony (19.1) had knee surgery last month, and no one is quite sure when — or if — he’ll return. Also, fellow freshman Anthony Harris is out for the season with a torn ACL. This has completely thinned out the roster for what was expected to be a national championship contender. North Carolina was picked to finish second in the league (behind Duke) and was No. 9 in the preseason poll. Now, this squad might struggle just to make the tournament if Anthony doesn’t come back. The Tar Heels are 4-3 at home, including a 96-83 loss at home to Georgia Tech.

Dave Leitao’s second coaching stint with DePaul is finally bearing fruit in Year 5. DePaul could wind up being one of the biggest stories in the sport. The Blue Demons opened the season 9-0, capped by a victory over Texas Tech, last season’s NCAA runner-up. It was their best start since 1986-87. DePaul has come down to earth with back-to-back home losses to Seton Hall and Providence. Still, this has been a vast improvement for a program that was picked to finish last in the league and hasn’t made the NCAA tournament since 2004. The 10-team Big East might be the best conference. It’s No.2 behind Big Ten in the Sagarin ratings. Junior forward Paul Reed is seventh in the NCAA in blocked shots (3.20) per game.

This is a pivotal year for Patrick Ewing. He returned to his alma mater with no previous college coaching experience. Ewing’s record over the first two seasons was 34-29, and this looks like it could be another mediocre season. Georgetown’s best victory is at Oklahoma State, and it lost at home to UNC Greensboro. The biggest headlines for Ewing’s program have been alarming: players transferring out of the program following sexual assault allegations, and a scuffle during a loss with Seton Hall. Georgetown has a tough remaining schedule with two games against No. 16 Villanova, two games against No .6 Butler, two games against Xavier, and a rematch against Seton Hall.

Since the move to the Big Ten, it’s been extremely difficult for the Scarlet Knights. But Steve Pikiell appears to be gaining traction. The program won seven conference games last year. This season, Rutgers might be able to compete for an NCAA Tournament spot. The last time that happened was 1991.

Picked to finish second-to-last in one unofficial Big Ten media poll, Rutgers has already beaten three quality opponents: Wisconsin, then-No. 22 Seton Hall, and No. 20 Penn State. The biggest issue could be the loss of point guard Geo Baker, who’s out indefinitely with a thumb injury.

Even with the NBA departure of last year’s NCAA Tournament hero Carsen Edwards, there were high hopes. They seemingly had enough returning with center Matt Haarms and Eric Hunter Jr. However, the Boilermakers haven’t been able to replace the shooting and scoring that Edwards and Ryan Cline provided. They slipped from No. 4 in the nation in offensive efficiency to No. 73. They are last in the league in field goal percentage (41.5) and points per possession (1.13).

TCU doesn’t have any great wins, but they also doesn’t have any terrible losses. That’s okay for a program that was picked to finish last in the conference and almost lost their coach. Jamie Dixon was a candidate for the UCLA job, but decided to stay in Fort Worth. Time will tell if that turns out to be a wise move. The Horned Frogs opened Big 12 play with a solid overtime home win over Iowa State. Dixon has yet to post a winning conference record, but won the 2017 NIT in his first season and reached the NCAAs in his second year. The Horned Frogs were an NIT semifinalist last year.

Senior guard Desmond Bane (17.0) is fourth in the league in scoring, and sophomore guard RJ Nembhard (13.6) has been one of the conference’s most improved players.

There isn’t really a big disappointment yet in the Big 12. However, we’ll nominate Texas, which is 1-2 on the road with losses at Providence (70-48) and at Baylor (59-44). The Longhorns were also bounced by Georgetown 82-66 in New York City.

Shaka Smart hasn’t been able to build an offense. Texas is No. 134 in offensive efficiency, is averaging the second fewest points in the league (67.1), and doesn’t have a single player averaging 13 points. If Texas fails to make the NCAA Tournament for a second straight season, will Smart survive?

The pressure is on Jerod Haase. His body of work (52-49 entering this season with no NCAA trips in four years) wasn’t as good as his predecessor Johnny Dawkins (156–115, 2014 Sweet 16). Dawkins was fired in 2016. So, Haase needs to show signs of progress. Stanford was picked to finish third-to-last, but has exceeded expectations. Their two losses are to Butler 68-67 and to Kansas 72-56. Stanford is winning with defense- No. 17 in adjusted defensive efficiency and No. 8 in fewest points allowed (58.3). The offense has been led by junior forward Oscar da Silva (17.0) — who’s shooting 60% — and freshman guard Tyrell Terry (15.1)

It’s a rebuilding year for UCLA, which was picked eighth in the 12-team league. Still, the Bruins have been worse than some imagined. They have lost at home to Hofstra and Cal State Fullerton. There just isn’t much talent. There are no McDonald’s All-Americans on the roster for the first time since the inception of the award in 1977. First-year coach Mick Cronin inherited a mess. Cronin was not the school’s first choice after an embarrassing coaching search that saw a lot of people turn down what has been a historically great job. Cronin should get UCLA back on track in a few years, but the fan base will need to be patient.

We all wondered what Eric Musselman could do at Power 5 school. He did a terrific job of building Nevada (110-34 record) and seemed destined to eventually land at a Pac-12 program. But Arkansas swooped in and Musselman is already working his magic. The Razorbacks were picked to finish 11th in the 14-team SEC. Right now, they look like one the conference’s better teams with solid wins over Indiana and Texas A&M. Their loss came in overtime at Western Kentucky. SMU transfer point guard Jimmy Whitt Jr. is shooting 53%. Arkansas has the nation’s top three-point defense, holding opponents to 22.3%.

Florida was No. 6 in the preseason polls. Right now, the Gators aren’t even ranked. Florida’s losses aren’t awful: home vs Florida State, at UConn, at Butler, and vs Utah State. They just haven’t been as dominant as we expected. This might be the best roster Mike White has had at Florida, which added stud graduate transfer Kerry Blackshear, Jr. from Virginia Tech. The Gators needed double overtime to beat Alabama at home, and struggled in the first half at South Carolina.