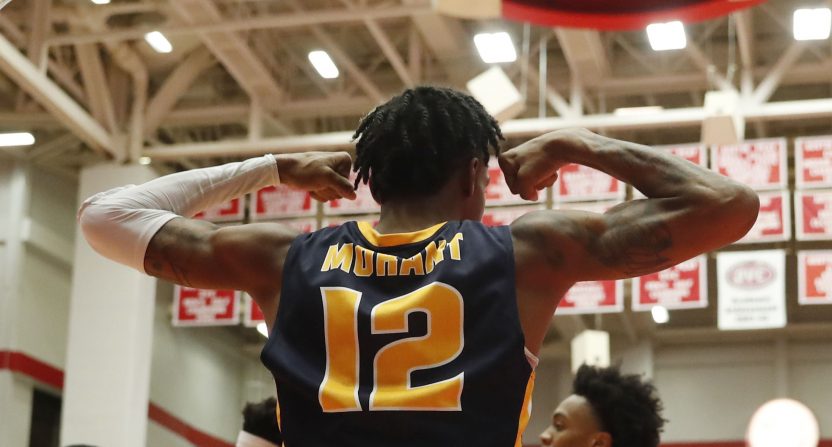 You must be special to get Magic Johnson to leave Los Angeles and come see you in Evansville, Indiana on a Friday. Magic wasn’t the only one. Representatives from 26 NBA teams were among the near capacity crowds at 10,000-seat The Ford Center. Former NBA players were in attendance such a Chuck Hayes and Walter McCarty. Even some non-basketball types (NFL wide receiver Larry Fitzgerald!).

The biggest attraction in college basketball not named Zion Williamson is Morant. And unlike Williamson, we know that Morant is healthy and ready to go. Morant might be THE guy that everyone wants to see in the NCAA tournament. March Madness is a lot more fun thanks to Morant powering the Racers (27-4) to the Ohio Valley Conference championship and clinching an automatic berth to the NCAAs. Once a two-star recruit, Morant has drawn comparisons to Russell Westbrook and could be the No.2 pick in the NBA draft.

Morant leads the nation in assists per game (10.0) and is eighth in scoring (24.6). Nobody has posted those numbers in over three decades.

The OVC has a rich mid-major tradition, but you don’t see many luminaries at their games. Last weekend was the most star-studded conference championship the league has ever seen. The OVC has produced NBA players before. Murray State alone has had guys drafted like Isaiah Canaan (second round pick in 2013 by the Houston Rockets) and Cameron Payne (first round pick in 2015 by the Oklahoma City Thunder). Canaan and Payne both played on better college teams.

But the OVC and Murray State have never had a basketball celebrity like this. Morant is a SportsCenter highlight waiting to happen. Williamson has captured the nation’s imagination due to his unusual physique (6-foot-7, 284 pounds) and because he plays for Duke. Morant is 6-3, 174 pounds, and while many have heard of Murray State, casual sports fans would struggle to find it on a map (The city of Murray is in the southwest corner of Kentucky. Population 17,741).

In college basketball, the coaches are usually the stars. The players are basically interchangeable from year to year. It takes a lot to stand out and get noticed across the nation. It’s a testament to how good Williamson and Morant have been this season.

People know Morant because they’ve seen him do things that make you jump out of your seat.

In the title game, Morant finished with 36 points against Belmont.

Morant is also box office gold. The OVC tournament is like a lot of other mid-major league championships. Audiences can occasionally be spotty. Not this year. Not with Morant. On consecutive nights, the conference set neutral site attendance records, capped by 10,525 on Saturday night. To put that in comparison, 4,280 saw Murray State win the OVC title last year in the exact same building against the exact same opponent.

What’s changed? A season ago freshman Ja Morant was Robin to senior Jonathan Stark’s Batman. With Stark gone, it’s been Morant’s show and he has blossomed into a phenomenon. ESPN’s Seth Greenberg has called the sophomore the most exciting player in the sport. Yes, over Williamson.

“It’s not just his dunking,” Greenberg said on ESPN. “It’s his vision. That dude drops dimes that you cannot believe.”

Will Perdue got a close look at Morant. The former NBA player and analyst called the OVC title on radio for Westwood One Sports. He too lauded Morant’s floor game.

“He’s a talent,” Perdue said. “His court vision – I almost compare him to a quarterback. The way he looks the defense off. His ability to thread the needle on passes. It’s impressive.”

Credit Murray State assistant coach James Kane for discovering Morant – virtually by accident. He was in a South Carolina gym recruiting another prospect – current freshman guard Tevin Brown. Originally Murray State was one of a handful of small schools to offer him a scholarship. Later, a few bigger schools – most notably South Carolina and Clemson – were interested in Morant. But Morant was interested in Murray and stuck with his commitment.

As a freshman, Morant (12.7 points per game, 6.2 assists per game) looked like he might be a future NBA player. He recorded a triple double and was one of only two players in the nation with 400 points, 200 rebounds and 200 assists (Marshall’s Jon Elmore was the other). Everyone expected him to take another step in his growth. But did anybody see this quantum leap coming?

“It’s no surprise at all,” Murray State coach Matt McMahon said. “We saw it in the recruiting process. We saw it last year as a freshman. I don’t try to put pressure on him, but he’s going to be one of the best players in the world for a lot of years to come.”

High praise. High expectations. It will be fun to see what else Morant can do in March.