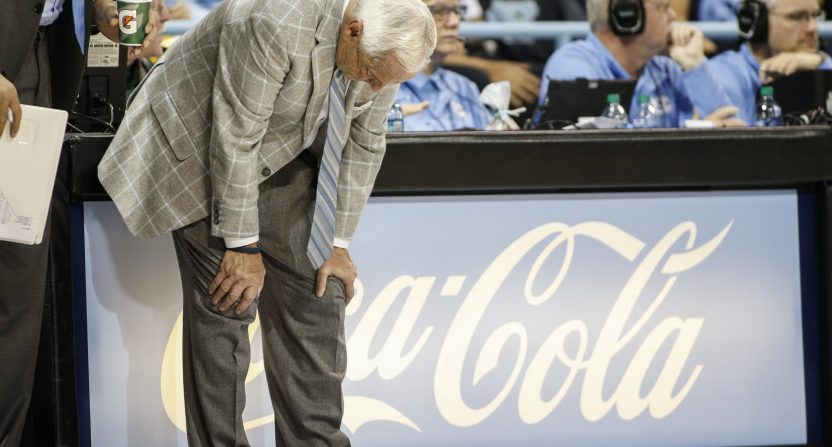 It sure looks like the 2019-20 group will change that trend. The unranked Tar Heels lost 94-81 to No. 2 Gonzaga on Wednesday night in Spokane.

Sure, losing at Gonzaga is totally fine and even *likely* for anybody these days, but this is the Tar Heels’ fourth straight loss and their fifth loss in the last six games. It’s the first time they’ve lost four straight games since 2009-2010, when they were 20-17 and went to the NIT.

North Carolina just lost its fourth straight. Last time that happened was in 2010 … when the Tar Heels went to the NIT.

And UNC’s previous loss came at home against Wofford (currently 126th on Ken Pomeroy’s rankings), so it’s not like all of the losses are coming to powerhouses.

Gonzaga fans chanting "We want Wofford!" as the Zags steamroll UNC (which lost Sunday to Wofford).

This is why college basketball rocks. pic.twitter.com/t0fRhOXrsE

Now, it’s certainly worth pointing out that the Tar Heels have been without freshman star guard Cole Anthony (a potential top-five pick in the next NBA Draft) for the last two games, and he’s likely out for another four-to-six weeks. His absence surely factored into the loss vs Wofford, at least.

But Roy Williams’ squad is now a very mediocre 6-5 on the season. The KenPom rankings still have the Tar Heels 37th (UNC’s strength of schedule has still ranked high, Wofford aside), but they entered play on Wednesday ranked 95th in the NET.

And even if the NET/RPI/etc improve for UNC, there’s a point where the W-L record is a big problem. At 6-5, the Tar Heels are already in big trouble, especially with conference play coming up, and especially without Anthony for at least a month. The ACC is always a grind, and there are currently five games vs ranked opponents on the conference schedule. Perhaps when Anthony returns the Tar Heels can make a run, but it may be too late to make their résumé good enough as a bubble team, and they would have to go through a gauntlet to win the conference tournament.

These are bizarre times for the UNC basketball program, and it may continue that way for the rest of the 2019-2020 basketball season.