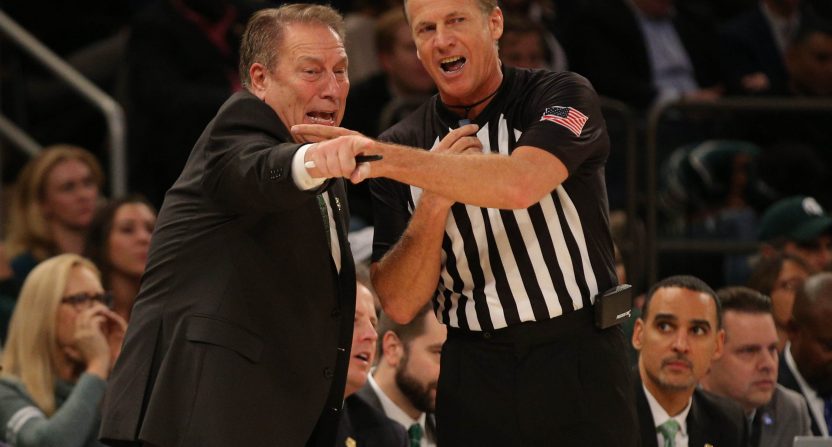 The 2019-2020 college basketball season is underway. Here are the biggest questions this season:

Is this the year Tom Izzo finally gets his second championship?

No shame in No. 1 Michigan State losing 69-62 to No. 2 Kentucky on a neutral court. Tom Izzo is Mr. Final Four. He’s reached the national semifinals eight times – one of only five coaches in NCAA tournament history to do so. However, in that group – which includes Mike Krzyzewski, John Wooden, Dean Smith, and Roy Williams – Izzo is the only one with just one national championship (2000). In fact, as much as the Big Ten loves to boast about its basketball excellence, no Big Ten school has won the title since the Spartans.

Among active coaches Krzyzewski, Williams, and Jay Wright have multiple titles. This could be Izzo’s best shot at a second NCAA championship. Michigan State is the preseason No. 1 in both the Associated Press poll and the Coaches Poll. Believe it or not, it’s the first time Michigan State has started out top ranked. Not even the Magic Johnson Spartans began No. 1. (Johnson led the team to the 1979 championship). Michigan State has a go-to player in guard Cassius Winston who is among three returning starters.

Who will be the most exciting freshman?

There probably isn’t a Zion Williamson in the bunch. Williamson was a phenom the likes of which we might not see for a long time. But there’s a good chance that the player to watch this season will be North Carolina freshman Cole Anthony. The point guard was rated the No. 2 overall recruit in the country (second to Memphis center James Wiseman). He’s also the son of former NBA point guard and UNLV star guard Greg Anthony.

Anthony will inherit the spot vacated by Coby White, who was one of the fastest point guards in Tar Heels history. Coach Roy Williams will turn the keys over to Anthony to run his famous fastbreak offense. Williams has already called Anthony “one of the most complete point guards I have ever recruited.” Anthony, the MVP of the McDonald’s All-American Game, has great instincts and can finish in traffic. He still has room to grow in terms of taking care of the ball. However, he should be one of the best players in the nation.

Penny Hardaway isn’t shy. Last month, he said this about his young Tigers: “When I look at this group, I just say to myself, ‘We’re going to win a national championship.” Memphis brings in the nation’s No. 1 recruiting class including the country’s top recruit in 7-foot-1 freshman James Wiseman. The last school to win the NCAA title with the top recruiting class was Duke, which had freshmen Jahlil Okafor, Justise Winslow, and Grayson Allen for its 2015 championship squad. But that team also had upper classmen in senior guard Quinn Cook, and junior forwards Amile Jefferson and Marshall Plumlee.

Memphis started five freshmen in opening 97-64 victory over South Carolina State. Wiseman (28 points, 11 rebounds in his debut) is a mobile big man who could wind up being the No. 1 overall pick in the 2020 NBA Draft. Along with Wiseman is power forward Precious Achiuwa, small forward D.J. Jeffries, and guards Boogie Ellis, Lester Quinones, and Damion Baugh. Five were members of ESPN’s top-100 incoming recruits. Memphis is predicted to win the American Athletic Conference, and is preseason No. 14 in the AP poll.

Will Juwan Howard succeed at Michigan?

Following John Beilein was always going to be a tough act. Beilein is one of the brightest basketball minds and is known as an excellent teacher and tactician. He coached Michigan to the NCAA title game twice over 12 seasons. Howard smartly and repeatedly said that he is “not going to try to be like” Beilein.

Howard is a Fab Five alum. Howard was a longtime pro assistant with the Miami Heat. But the recent track of former NBA stars with no previous college coaching experience isn’t great. Patrick Ewing is 34-29 over two seasons at his alma mater Georgetown. Chris Mullin went 59-73 before quitting from his alma mater St. John’s. If you’re looking for a positive example, Fred Hoiberg went from the Minnesota Timberwolves front office to taking over Iowa State where he went 115–56 and reached the 2014 NCAA tournament Sweet Sixteen. Michigan is picked to finish fifth in an unofficial Big Ten preseason media poll. The non-conference schedule is tough, and a wrist injury to freshman guard Franz Wagner could lead to a slow start.

Is there anyone in the Pac-12 worth talking about?

Let’s face it. This league has been bad. Over the past two seasons, only one Pac-12 team has made it to the second weekend of the NCAA Tournament. In 2018, the conference went an embarrassing 0-3. Last season, Oregon reached the Sweet Sixteen as a No. 12 seed. but Washington was one and done, and Arizona State, after winning a play-in game against St. John’s, was crushed by Buffalo.

Oregon is this year’s favorite. The Ducks (No. 15) were among two Pac-12 teams in the AP poll along with Arizona (No. 21). Three other conference teams received votes: Washington, Colorado, and USC. Oregon is led by all-conference guard Payton Pritchard, who was the conference tournament MVP. Arizona welcomes a pair of McDonald’s All-Americans to the mix in Nico Mannion and Josh Green.

The perception of the league will be formed by what it does in the non-conference. Oregon will play Memphis and Houston, and participate in the Battle 4 Atlantis where they will open against Seton Hall and could face Gonzaga and North Carolina.

Excluding Gonzaga and Memphis, who will be the best team from a non-power conference?

Utah State is ranked No. 17 in the AP preseason poll. A first for the Mountain West school. Last year, the Aggies went 28-7 for the third-most victories in history. They earned a No. 8 NCAA tournament seed – the highest ever for the program. Four returning starters are back, including Sam Merrill, the Mountain West Player of the Year and Tournament MVP, and sophomore center Neemias Queta. The biggest concern is 7-footer Queta, who’s coming back from a sprained knee injury he suffered in the FIBA U-20 European Championships in July.

If Utah State lives up to expectations, coach Craig Smith could be a name to watch when the coaching carousel starts up. Last season was his first at Utah State after being at South Dakota for four seasons.

What team could be this year’s Texas Tech?

Texas Tech was unranked in last year’s preseason Top-25 poll, and was picked to finish seventh in the Big 12. The Red Raiders wound up snapping Kansas’ conference championship streak of 14 in a row, and made it all the way to the NCAA title game before losing to Virginia in overtime.

While it’s unlikely that comes out of nowhere to play for the national championship for the second straight season, let’s speculate. What school could pull off such a feat? Perhaps Oklahoma State, which is picked to finish sixth in the Big 12. The Cowboys return their entire starting five. highlighted by sophomore forward Yor Anei, who was seventh in the nation in blocked shots (2.66). The team also adds UMass grad transfer guard Jonathan Laurent.

Which rivalry game should you watch?

Don’t let ESPN fool you. Duke and North Carolina have a sibling rivalry because they’re Atlantic Coast Conference brethren. For real heat and animosity, you can’t beat Louisville vs. Kentucky. These programs, coaching staffs, players, and fanbases have had some sincere disdain for each other. While the rivalry probably will never reach its peak –Rick Pitino vs. John Calipari – it’s still the one sporting even that unites the Commonwealth in hatred.

This year is only the second installment of Chris Mack vs. Calipari. However, both programs are national championship contenders. Kentucky is No. 2 in the preseason poll and Louisville is No. 5. They meet in Lexington on Dec. 28.

Who will be the biggest impact transfer?

Kerry Blackshear Jr. was the most coveted “free agent” on the transfer market. Florida landed the Virginia Tech graduate transfer forward over Kentucky and Tennessee.  Blackshear averaged 14.9 points and 7.5 rebounds last season and makes the Gators a national championship contender. In his debut, Blackshear had 20 points and 10 rebounds in Florida’s 74-59 win over North Florida.

Who will be in the Final Four?