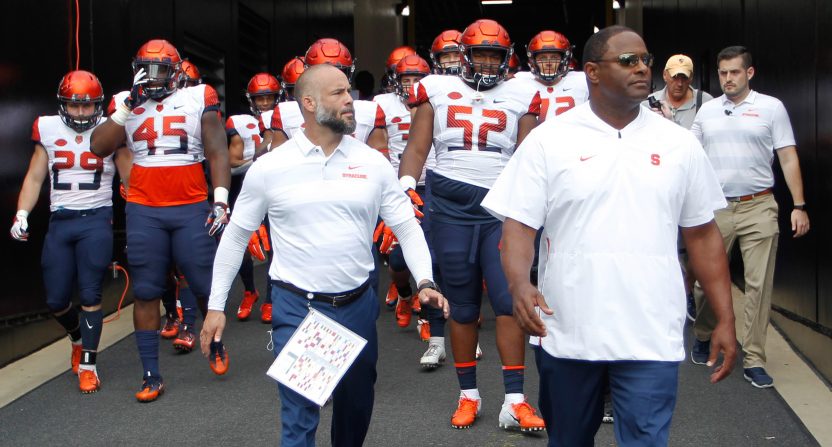 With just the 2019 College Football Playoff National Championship left, you might think that the coaching carousel is done spinning on the 2018 season. But of course, the flurry of activity that happens in December and early January through college football also feels the aftershocks of the NFL’s Black Monday.

As such, we’re not waiting to find out if Notre Dame’s Brian Kelly is going to jump ship to the Tampa Bay Buccaneers. Because if so, that could set off yet another chain reaction that sends another college football coach to South Bend, leaving his previous program in need of new blood. And on and on it goes until someone hires a coordinator or out of work also-ran.

Barring a surprise spring quitting, we’ll pretty much know where everyone stands by the time February rolls around. However, that’s when we stop wondering who’ll be hired this year and put all our focus on next year. Because if there’s one thing we’re sure of, it’s that we’re going to do this all over again. When we do, here are the coaches you’ll probably be hearing about a lot to replace the ones who leave or get fired in 2019.

When Dino Babers arrived at Syracuse, he was replacing Scott Shafer, who had failed to maintain the positive momentum built by predecessor Doug Marrone. Two years in, Babers had a couple marquee wins under his belt (including an upset of Clemson) but dual 4-8 finishes didn’t inspire too many people. 2018, however, was the turnaround. All the pieces came together and the Orange finished the season 10-3, including a Camping World Bowl win over West Virginia. Truth be told, they were also about five minutes from knocking off Clemson once again and, had they done so, we might be talking about some crazy things right now. Still, Babers has Syracuse at heights it hasn’t seen in almost two decades and people have taken notice. He signed an (undisclosed figure) extension a few weeks back and the 57-year-old appears to have found a place he can easily call home for the foreseeable future. But if an when a Big 12, Big Ten, or SEC program comes calling next year (as Syracuse should, in theory, still be pretty good), they might just back up the Brinks truck enough to send him on his next rebuilding job.

This one might be moot if Kingsbury is hired by an NFL team in the coming days, but assuming he does stick it out with the Trojans in 2019, he will almost certainly be near the top of just about every program’s head coaching list come December. Kingsbury was fired by Texas Tech in late November after compiling a 35–40 record in six seasons. However, Kingbury’s offenses were often among the best in the nation, averaging 550 yards and nearly 42 points per game since he became an OC in 2011. No wonder the NFL wants in on that action. And considering he’ll probably be able to get USC back into offensive form in 2019, expect NCAA programs to be drooling over him if he’s still available.

A lot of people are still trying to wrap their heads around Mark Richt’s sudden retirement from Miami a few days ago. While 2018 was a pretty bad year by The U’s standards, Richt certainly had enough cache built up to weather the storm and rebuild the Canes in a weak ACC Coastal Division. Whether he’s burned out or was pushed out, Richt is likely to now spend the 2019 season on the sidelines or possibly in a TV booth. However, when it comes time for multiple programs to find their next field general in 11 months, we fully expect them to put feelers out in Richt’s direction. The 58-year-old carries with him a lifetime 171–64 record at Georgia and Miami as well as two SEC Titles. He also took his team to a bowl game in every single one of his 18 years as a head coach. If Richt is pulling an Urban Meyer, he’s certainly going to be able to jump back into the game easily.

It says something about how good of a coach Matt Rhule is that we’re even discussing him a year removed from 1-11 at Baylor. But the former Penn State player who worked his magic at Temple (back-to-back 1o-wins seasons) is starting to do the same in Waco. He weathered the storm while the Baylor program attempted to pick up the pieces left behind by Art Briles and is now returning the team to respectability, on and off the field. If he can follow up 2018’s 7-6 finish with another positive season, he’s likely to be back on everyone’s radar as they look for someone to come in and make waves quickly. If Penn State sours on James Franklin, Rhule is probably the first guy they call. He’s also got the pedigree to take over just about any other high-profile program in need, like Notre Dame, USC, or FSU.

Of course, Urban Meyer is going to be on this list, are you kidding? The most accomplished college football coach this side of Nick Saban might be walking away from Ohio State in order to separate himself from the bad PR surrounding him and the Zach Smith scandal, but few people believe he’s walking away for good. Not only did he do the same thing at Florida once before, but there is no doubt that schools like Notre Dame and USC would open the vaults to pay Meyer ungodly amounts of money to run their football programs. Urban might scoff publicly at the idea but he’s firmly in “never say never” territory, especially because we know better than to believe his retirement schtick.