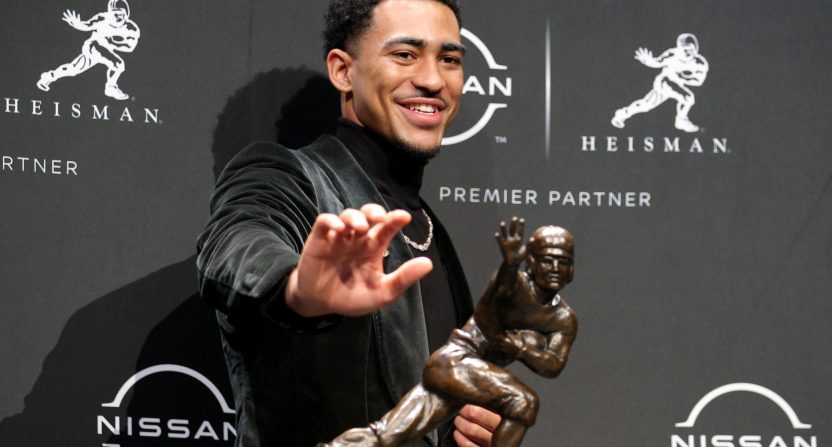 Alabama Crimson Tide quarterback Bryce Young won the Heisman Trophy during his sophomore season in 2021. Early expectations are that he’ll do the same as a junior.

Young and Stroud being the two clear favorites is expected. That won’t change until the season starts, as long as they both remain healthy. They finished first and fourth in Heisman voting a year ago. The second and third-place finishers — Aidan Hutchinson and Kenny Pickett — are both heading to the NFL. Given their 2021 production and that their teams are perennial National Championship contenders, expect both to be in the Heisman mix, barring injury.

If there’s a surprising name of the five listed, it’s Uiagalelei. In 2021, he completed 55.6% of his passes for 2,246 yards with nine touchdowns and 10 interceptions. On the ground, he added 308 yards and four touchdowns. Those are far from the numbers you would expect to see from a Heisman Trophy winner. If he’s going to contend for the Heisman, the numbers will need to be a lot better.

A notable omission from the top-five is Alabama outside linebacker, Will Anderson Jr. He finished fifth in Heisman Voting in 2021, making him the third-best returning player (behind Young and Stroud). Anderson was a nightmare on opposing quarterback, tallying 17.5 sacks. Anderson is at No. 6, listed at +3000.

Of course, Anderson would be fighting an uphill battle. He was one of three defensive players (along with Hutchinson and Georgia defensive tackle Jordan Davis) to finish in the top-10 in 2021. But Charles Woodson remains the only defensive player to win the award. Additionally, only five non-quarterbacks or running backs have lifted the Heisman.

Looking at other longshot candidates, Mississippi State quarterback Will Rogers (listed at +9000) is not a bad way to go. In 2021, Rogers threw for 4,449 yards with 35 touchdowns and eight interceptions, and he completed 75.1% of his passes. Playing in Mike Leach’s offense, expect gaudy numbers from Rogers if he stays healthy.

Young is the 14th player to return to college after winning the Heisman Trophy. Of the first 13, only one — Ohio State running back Archie Griffin — won the award again. A win from Young would also mean the third straight Heisman Trophy win for Alabama, following his win in 2021 and DeVonta Smith winning in 2020. No school has ever won the award three years in a row. So, if Young does repeat, it will be history-making on more than one front.