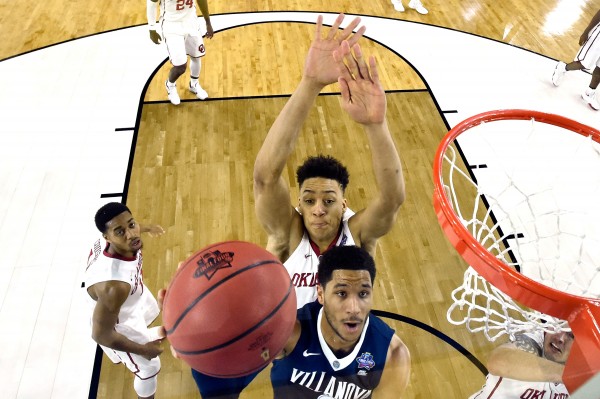 The Villanova Wildcats aren’t the highest-seeded team at the 2016 Final Four.

In a national semifinal which felt like Saturday’s main event but was relegated to the undercard time slot by North Carolina’s TV-magnet presence, Villanova landed an early knockout blow against the shellshocked Oklahoma Sooners. After a beatdown reminiscent of Kansas over Marquette in the 2003 Final Four’s opening semifinal, Villanova’s Jay Wright will coach in his first national championship game. The Wildcats will try to win their second national title.

You know when the first one came, in 1985 against Georgetown.

That 1985 reference isn’t just a cute historical throw-in, either. In that game, Villanova shot 78.6 percent from the field (22 of 28). Saturday against Oklahoma, Villanova was “much” worse in the first half.

The Wildcats hit “only” 66.7 percent of their tries against the Sooners, roughly 12 percent worse than what Rollie Massimino’s men achieved 31 years ago in Lexington, Kentucky.

When 18-of-27 shooting pales in comparison to another game, one can appreciate just how perfectly Villanova played against Patrick Ewing and the Hoyas way back when.

If Villanova can play at this heightened level on Monday night, the Wildcats will bring a second national championship to Philadelphia.

In a savage curb-stomping such as this one, analysis need not be complicated or prolonged. Everything came relatively easily for the Wildcats, and everything was quite difficult for the Sooners. Villanova established offensive balance — not just in terms of various players getting involved early, but in terms of attacking in different ways from all spots on the floor.

Consider this bim-bam-boom assortment of plays below. They came late in the first half, when Villanova sped away from the Sooners. VU built a commanding 42-28 halftime advantage which mushroomed into a much bigger second-half margin.

First and foremost, Josh Hart — 7 of 8 in the first half, and on fire throughout this national semifinal — made very effective forays into the paint:

Getting to the rim for Nova.

Next, Daniel Ochefu, the big man whose game has developed so much this season — even if his raw stat line will never be able to reflect that growth — obtained low-post touches with great floor spacing:

On the perimeter, various shooters were hitting for Villanova, which decisively knocked down two things on Saturday: shots, yes, but also the idea that Houston’s NRG Stadium would pose a problem with its shooting background.

Here, Ryan Arcidiacono ripped the twine with a three off a kick-out. Oklahoma constantly helped in the paint, but Villanova’s smart inside-out game established the right template and had Oklahoma out of position on a constant basis:

Kick-out and open 3 for Nova.

Villanova, in short, played offense the way it did in each of the first three games of this NCAA tournament, en route to the Elite Eight. The Wildcats were a juggernaut in those games, and they recaptured that level of potency against Oklahoma.

Yet, while soaring on offense once again, the Wildcats remained as rugged and effective on defense as they were against another Big 12 team — Kansas — in the South Regional final.

Oklahoma needed all five starters — very much including its bigs, Ryan Spangler and Khadeem Lattin — to contribute on Saturday. The Sooners received so much production from their backcourt and their wings on the road to the Final Four, but they needed their low-post players to offer a credible showing against Ochefu in order to keep this game close. That didn’t happen, on a day when Lattin was particuarly ineffective in all facets of competition.

When the second half began with OU trailing by 14, this national semifinal turned into a game Buddy Hield had to rescue for the Sooners.

Hield made only one three-pointer in the first half and didn’t attempt a single foul shot. He endured a prolonged shooting slump and wasn’t able to get to the foul line as a Plan B in the face of Villanova’s extended perimeter defense. Villanova established the terms on which Oklahoma played offense, and when the Sooners weren’t able to get to the free throw line, a misfiring Hield was lost at sea.

Villanova — after being that lost and confused team on the first weekend of the previous two NCAA tournaments — has learned the lessons provided by those stomach-punch setbacks. Getting to the basket; playing inside-out instead of outside-in; and defending with a ferocity not seen in 2014 or 2015 have all transformed the older, wiser Wildcats this spring.

Their game plan isn’t complicated on Monday night: Play like this.

The scary part for Monday’s eventual opponent from the ACC: None of this feels as though it’s unsustainable in any real way.