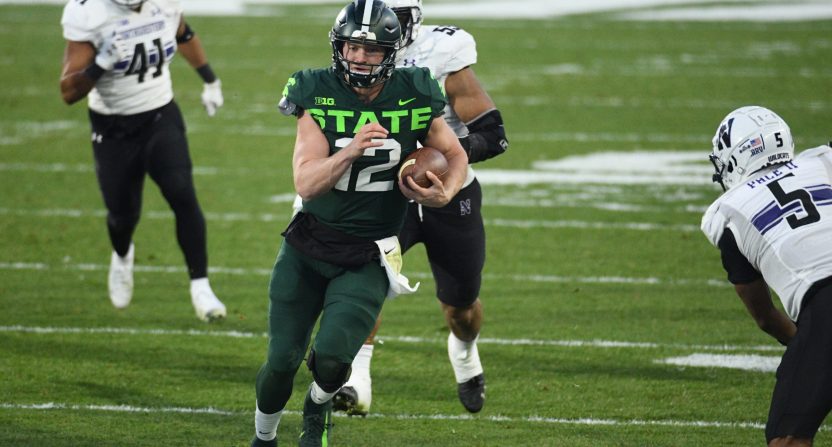 The Michigan State Spartans (2-3) took down the No. 8 Northwestern Wildcats (5-1) in Big Ten action Saturday in East Lansing. Here are our takeaways from the Spartans’ victory:

Michigan State’s defense clamped down for a big upset victory

Michigan State  — a 13.5-point underdog — completely shut down the Northwestern running game, limiting the Wildcats to 63 yards on 37 carries (1.7 AVG). Northwestern’s longest run was eight yards. The Spartans, on the other hand, ran for 195 yards on 47 carries (4.1 AVG).

The final play of the game summarized how it went for the Northwestern offense and Michigan State defense in this one:

Northwestern's lateral play summarized how this game went for them. Big win for Sparty. pic.twitter.com/0yCLNE8Mns

But this is a huge win for the Spartans, and especially for Mel Tucker in his first year as Michigan State head coach. The Spartans entered this game 1-3, and were outscored in their previous two games — at Iowa and vs Indiana — by a combined score of 73-7.

Not only did the Spartans pull off the upset, but it also appeared that they may win in blowout fashion. In the second quarter, Michigan State took a 17-0 lead.

Never too early for an upset alert. 🚨

It's 17-0 @MSU_Football, and this time it's Jayden Reed finding the end zone: pic.twitter.com/cb9rqVmQoY

Northwestern (-13.5) climbs out of a 17-0 deficit to take a 20-17 lead over Michigan State early in the 4th
pic.twitter.com/gzDoOTKWLK

But the Spartans came back to tie the game and take the lead on a pair of Matt Coghlin field goals. His go-ahead kick was a 48-yarder with 3:35 remaining.

Michigan State with a go-ahead 48-yard field goal vs No. 8 Northwestern. Didn't look pretty at first, but effective. pic.twitter.com/Lt0wff9cEx

Entering this game, ESPN’s Playoff Predictor gave Northwestern an 81% chance to reach the College Football Playoff if they were to win out. But a loss to a Michigan State team that entered with a 1-3 record is quite bad for the résumé, and especially with so little room for error in this tiny season. Northwestern surely had to win out- or at least only lose to a team like Ohio State in the Big Ten title game (the Wildcats are still in first place in the Big Ten West, at least).

And Northwestern’s next scheduled game may not even happen, due to a huge COVID-19 outbreak out at Minnesota.