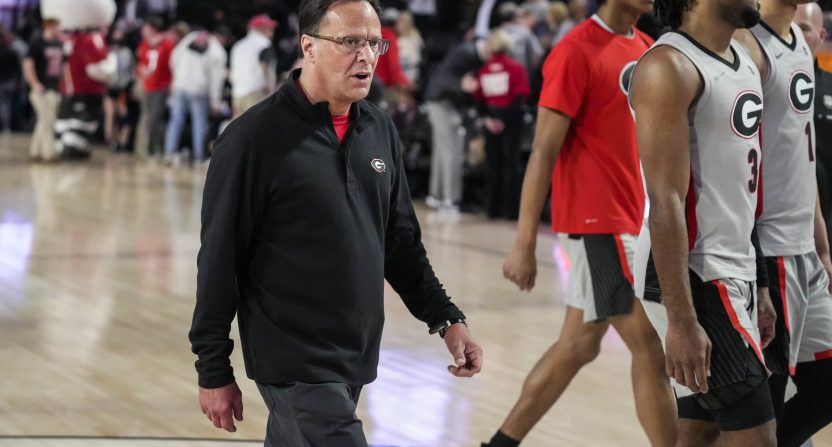 It wasn’t supposed to end like this for Tom Crean, but it’s almost over. There’s no way to sugarcoat it. Crean’s four-year stint at Georgia will go down as an unmitigated disaster, the likes of which we rarely see from a coach of his stature.

The Atlanta Journal-Constitution reported on Tuesday that Crean and the university will “part ways” after the season, a move that had been rumored for weeks.

A merciful finale to a miserable campaign. The Bulldogs (6-25, 1-17 Southeastern Conference) have endured their worst season since 1955-56 (3-21). They have lost more games than any team in program history. The only school among the power conferences with a lower won-loss percentage is Oregon State (3-27).

For the first time in his 22-year career, Crean is leaving an institution in worse shape than before he arrived. A harsh reality to face for someone with a reputation of being a program-builder.

When Crean was hired in March 2018, the move was largely applauded. Dick Vitale lobbied hard for Crean, calling him the “ideal choice.”  That’s no surprise. Crean has a lot of friends in the media and worked as an ESPN analyst while he was in between coaching jobs. He also has a reputation for being a kind person. Rick Bozich of WDRB-TV in Louisville, KY once chronicled how Crean helped a student get his car out of a snow-filled ditch in Bloomington, IN.

If you had a problem, Crean would solve it. He was the program-fixer who brought Marquette and Indiana back to national relevance. He reached the 2003 Final Four with the Golden Eagles, reviving a school that had fallen off the college basketball map. He guided the Hoosiers to three Sweet 16 trips, cleaning up the NCAA infractions mess left behind by Kelvin Sampson. Did things sour at the end with Indiana? Sure, but some thought he got a raw deal when he was surprisingly fired in 2017.

Crean and Georgia seemed like a solid match. The hope was that he would improve upon the 15 years of mediocrity under Dennis Felton and Mark Fox. Nobody could have predicted this implosion.

For the first time in his career, things got worse under Crean. A lot worse. No one was expecting the Bulldogs to be championship contenders in four years. But it was reasonable to assume they would reach the NCAA Tournament once.

Georgia fans weren’t immediately asking for the Bulldogs to be great. They would have happily settled for decent. And Crean couldn’t deliver. One winning season (14-12 in 2020-21) in four years. That’s shocking.

To put this calamity in perspective, Fox finished his nine-year run with five straight winning seasons. Georgia couldn’t wait to run him out of there. What about Felton? In five full seasons (he was fired mid-way through 2008-09), he finished with a losing record once.

It all started to go downhill quickly too. Crean entered his second season feeling good. He had just signed guard Anthony Edwards, the No. 2 overall recruit in the country and the highest-rated high school player the program has ever landed. This was huge. Supposedly a clear sign that everything was moving in the right direction.

Edwards, an electric athlete, finished third in the SEC in scoring (19.1). The bad news was that the Bulldogs (16-16, 5-13) were the second-worst team in the SEC. Georgia fans became more enraged when Edwards was picked first in the 2020 NBA Draft.

If your college team has the No. 1 overall pick, it has to at least make the NCAA Tournament. No ifs. No ands. No buts. That’s the reason why Johnny Jones got canned at LSU a season after failing to reach the 2016 NCAAs with Ben Simmons.

Perhaps that’s unfair and simplistic, but it did make a lot of observers wonder. And when players started transferring out (nine in 2021), Crean was in trouble.

The SEC is a football conference first, but it has made a substantial investment in basketball in recent years. According to the Sagarin College Basketball Ratings, the SEC has been the third-best league this season, trailing only the Big 12 and the Big Ten.

Georgia is struggling to keep up. That’s why Crean is on his way out. Seems unlikely that another school will give him a chance. Don’t feel too sorry for him, though. He could return to TV. He was a good fit there.

The shot clock ran out on Crean. An ending he never saw coming.