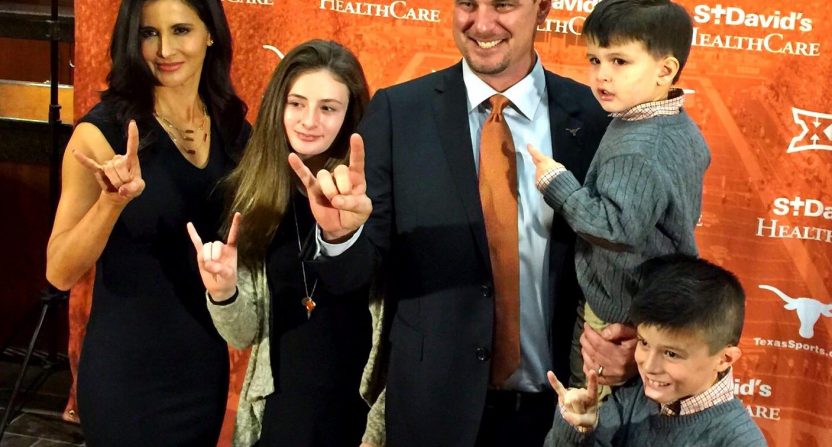 Recruiting in college football is a competitive environment where every coach can take on the role of snake or snake oil sales person. Coaches must do and say whatever they can to convince the top high school players to join their college football program, and sometimes those high school kids change their minds about the direction of their recruiting. And when that happens, some coaches take the moment to send some veiled, and sometimes not-so-veiled, shots.

Tom Herman is busy working to improve the Texas football program in his first year on the job. Herman has started to build a solid recruiting class as he breathes new life into the program. Among the current commitments lined up for the Longhorns in the Class of 2018 are three players from the state of Oklahoma. With Herman and Baylor’s Matt Rhule ramping up the competition for recruits in the region, Oklahoma defensive backs coach Kerry Cooks fired off a tweet warning recruits of some coaches who may not be all they appear to be.

As if the image of a wolf dressed in sheep wool was not enough to make the point, Cooks used some Pinnochio-nosed emojis to drive it into the endzone. It is at this point the rivalry between Oklahoma and Texas took things to new heights because Herman’s wife Michelle was the one to fire back on Twitter. She did so with some good fire.

This tweet was in no way a coincidence. The description of how wolves succeed by working in a pack enforces the idea the Texas staff will thrive in their mission to make the Longhorns competitive again at a Big 12 championship level, if not more. The winky emoji is a clear response to Cook’s original tweet, and the longhorn hand gesture emoji was a nice touch too.

Oklahoma has had the upper hand in the rivalry with the Longhorns more often than not in recent years, and the Sooners have certainly been more successful overall. If Herman can do at Texas what he did at Houston, then we can look forward to Michelle Herman taking shots at critics and opposing coaches trying to start something on Twitter for years to come, and that is perfectly fine by me.