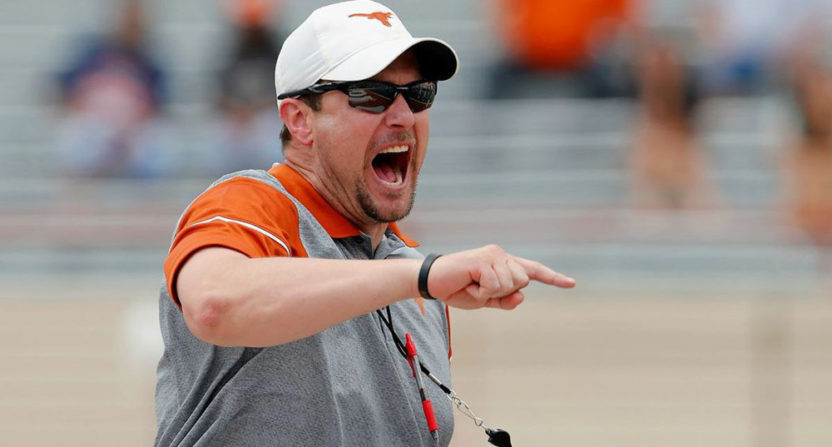 Perhaps Texas head coach Tom Herman can send Maryland head coach D.J. Durkin a thank-you note later this coming week? He probably should after Maryland helped Texas get back to reality in the wake of a 51-41 setback at home on Saturday.

Where to start with the list of problems unveiled for the first time in the 2017 season for Texas?

*To be fair, Texas did make up for this with one of their own

The truth is, Herman was dropping hints that he knows his Texas team still has a good amount of room for improvement. You didn’t hear Herman going out and talking about how his team was going to have decided schematic advantages or suggesting his team is well-equipped to flip a light switch and jump in the Big 12 chase this season. Leading up to the season opener, Herman was cautious with regard to the depth concerns he has on the roster and his offensive abilities ready to take flight this season. Despite the preseason polls falling in love with Herman and Texas with a No. 23 ranking in the AP and coaches’ polls, Herman now has all the ammunition he needs to truly begin the work needed at Texas.

To say the season opener for Texas was a disaster would be too kind. While the game may have been a key turning point in Maryland’s run in the Big Ten under second-year coach Durkin, Texas did themselves no favors by playing poorly on offense, sloppy on defense, and completely melting down on special teams and racking up the penalty yardage. It was as much of a dose of reality as you can imagine for Texas. The lesson being just because you change the head coach doesn’t mean much once the games are played, unless you make the adjustments needed.

Texas now has a long list of areas to work on moving forward, and it will be up to Herman to address each as needed. With so many problems becoming so shamefully and publicly visible on Saturday against Maryland, there is no reason to expect the Longhorns will correct everything in the course of the next week, or even two weeks. But if Texas can eliminate some of the concerns before Big 12 play opens up, then the Longhorns still have time to prove they really are a better team now under Herman than they were previously under Charlie Strong.

It’s only one game, but first impressions are impossible to avoid. In Tom Herman’s debut at Texas, he left a lot to be desired. This is a rebuilding project, but the defense was supposed to be one of the strengths this season. Overreacting to this loss would be unwise, because the college football season is a marathon and not a sprint, but a game like this may be just what the doctor ordered for Herman and his staff. Texas now has a checklist of all of the weaknesses that were exposed in Week 1 by Maryland.

If Texas fixes those holes and has a good season, Herman can send Durkin a nice thank-you note for helping him out.