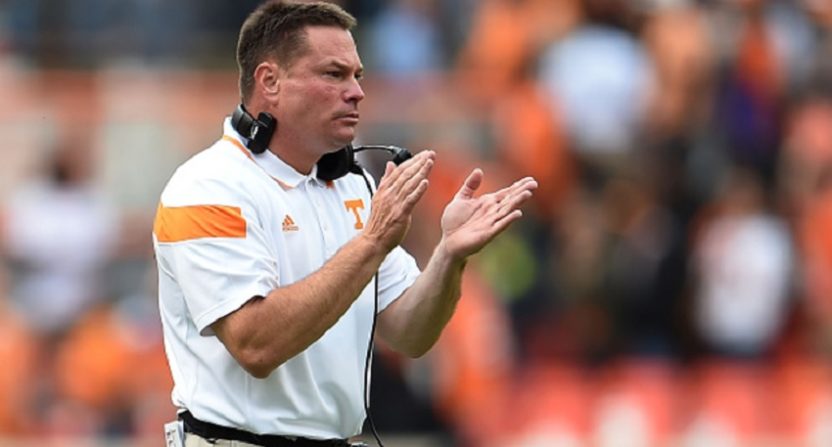 Many college football writers have been critical of Butch Jones at Tennessee, myself included. He’s sitting on what many consider one of the nation’s hottest seats entering 2017. Have we all been too harsh? Jones does have some arguments in his favor. Even Paul Finebaum walked back some of his criticism this week.

Jones has made Tennessee better. There’s no disputing that. He’s finished ranked No. 22 in the AP Poll two seasons in a row. Those were the Vols’ first seasons finishing ranked since 2007. Tennessee did not reach No. 22, in any week, the six years before that — including the entirety of the Kiffin/Dooley era.

We can see the progression in Tennessee’s raw performance. Below are the SRS numbers (measuring schedule strength and victory margin) for Jones’ first four seasons. I compiled expected SRS numbers for the same four seasons using a weighted three-year formula.

Over the first three years, Tennessee was getting better and overshooting expectations. The Vols were within a point of the expected SRS in 2016, during a season where injuries to key players decimated them. It’s not Jones’ fault that media members ran wild with expectations before the season looking at returning starters and recruiting class rankings.

That said, the widespread criticisms are valid. Jones has brought Tennessee back to the spot where they are winning the games they should win. It looked like the Vols had an eight-win floor entering 2015 and 2016. They went 8-4, both times.

Big games were a major issue in 2015. The four games Tennessee lost? Oklahoma, Florida, Arkansas, and Alabama. Their best win came by a field goal against a Georgia team that got Mark Richt run out of Athens.

Jones, finally, snapped the 11-year losing streak against Florida with a 38-28 win in 2016. But Tennessee countered that with inexplicable road losses to South Carolina and Vanderbilt that cost them a trip to the Sugar Bowl. Some of those eight regular season wins (overtime with Appalachian State) were nervier than they needed to be.

Close losses in big games happen. But noteworthy ones have come down to his decision-making. Florida came back to win 28-27 in 2015. Tennessee kicked an extra point up 12 in the fourth quarter rather than go for two to make it 14. Jones blamed the extra point chart. A correct extra point chart would not have told him that. It’s not clear why he would even have needed to consult one.

In the Oklahoma game the same year, Tennessee blew a lead and lost in overtime. Late-game collapses happen. Jones deciding to kick a field goal on 4th-and-goal from the 1-yard-line six minutes into the game was a strategic blunder. Score and it’s a touchdown. Fail and Oklahoma gets the ball pinned inside the one, a situation where Tennessee is likely to get the ball back close to scoring position.

Those moments have shaped opinions of Jones nationally. The big games are the ones most media members watch. The enduring impressions have been self-defeating conservatism and body language that exudes anxiety in tight situations.

Entering his fifth season, the question becomes not about where Tennessee was when Jones got there. It’s about where Jones is taking them and where fans want them to be. Yes, Tennessee was in a terrible spot when Jones arrived. But it’s also a program that has won a national title in recent memory.

Tennessee’s Expected SRS for next season is 10.89 which, most years, would put the Vols into the 20-25 range. If Jones can’t jump the hurdle again and put forth at least a competitive Top 15 team, a new athletic director may opt to change course. Despite the progress Jones has made at Tennessee, it would be hard to blame him.