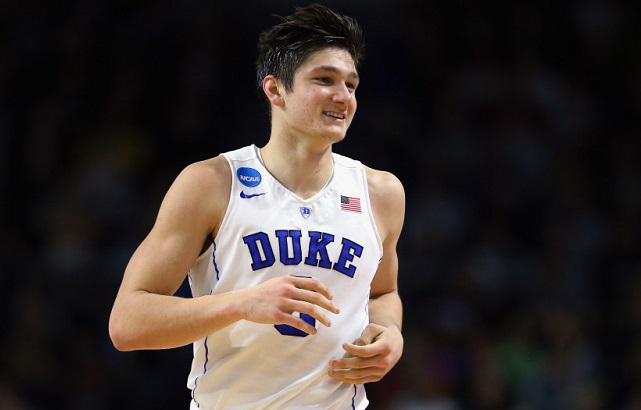 On April 5, Villanova’s Kris Jenkins delivered an illustrious shot in college basketball history, knocking down a three-pointer from the right wing to send Wildcats fans into a state of hysteria. Fortunately, just 25 days remain before plenty of captivating moments will occur once again.

In the previous campaign, Oklahoma’s Buddy Hield spun himself into many of those occasions and eventually won the Naismith Trophy as the top college basketball player in NCAA Division I. For instance, the then-senior scored 37 points in 39 minutes vs. Oregon in the Elite Eight, which helped carry the Sooners to the Final Four.

Which players are lurking behind the curtain to take home the award for the 2016-17 season? Let’s take a peek.

Here’s the dark horse for the Naismith Trophy. Trimble excelled as a freshman but regressed a season ago, supplying 14.8 points per game with just a 41 percent clip from the field. On top of that, his three-point percentage dipped around 10 percent. Once the Terrapins entered March Madness, however, the 6-foot-3, 190-pound guard rose to the occasion. He averaged 20 points in their three NCAA Tournament games and took at least nine free-throw attempts in each of them, too.

Therefore, a lack of aggression isn’t the issue. The junior must tack on a higher field goal percentage to insert his name into the discussion. Due to the departures of forwards Diamond Stone and Robert Carter, Maryland requires a renovated Trimble to keep pace with the rest of the conference.

Wolfpack fans might fret that Anthony “Cat” Barber is gone, but Smith Jr. should quickly erase their apprehension. After tearing his ACL in the 2015 Adidas Nations College Games, the 6-foot-2, 190-pound guard shut down any talk of a slow recovery, posting 11.7 points, 5.7 rebounds, 4.3 assists and 3.3 steals per contest at the latest Adidas Nations. He’s a lethal defender and displays innovation on offense, finishing well in traffic. NC State has enough talent for a tourney bid, so Smith Jr.’s maturation in ascending to that next level is critical.

Brooks would’ve found himself within the top five of this list if it wasn’t for injuring his foot in the midst of the team’s four-game slate in Spain over the summer. While the timetable for his return is unknown, the Ducks dealt with Dylan Ennis’ foot injury last season. Expect them to show caution before Brooks returns to the hardwood.

Regardless, when he’s set free, the 6-foot-6, 225-pound forward will undoubtedly shine. Brooks scored in double figures in all but five games in 2015-16, averaging 16.7 points per contest, along with 5.4 rebounds and 3.1 assists. Supposing that he can shake off the scare, the Canada native will force himself into the mix for the award.

A crystal ball isn’t required to know that the Jayhawks will contend for a national title. Even without 80-year-old Perry Ellis, guards Frank Mason III and Devonte’ Graham lend head coach Bill Self numerous scoring options. Oh, and then there’s Jackson.

Already projected by many as a top-five pick in the 2017 NBA Draft, the freshman exhibits an uncanny amount of energy on either end. He’s also very unselfish for a highly-touted recruit. The 6-foot-8, 2o5-pounder could flourish immediately, but his shooting percentage from both the field and free-throw line will need a boost first.

The Tigers haven’t punched a ticket to the Big Dance since 2011, but Blossomgame’s prominence could be enough this time around. The 6-foot-7, 215-pound forward generated 18.7 points and 6.7 rebounds per contest last campaign. Moreover, he shot above 50 percent on two-point shots, as well as sinking 44.1 percent of his three-point attempts. Astonishingly, he was able to convert 61.7 percent of his shots near the bucket (via Synergy Sports Tech).

Yet, according to DraftExpress, Blossomgame seems to malfunction on defense by not closing out on shooters during stints of the action. He’ll need to polish up his reputation on that side of the floor as a senior.

Despite the departures of Jaylen Brown and Tyrone Wallace to the NBA Draft, as well as Jordan Matthews shipping himself up north to Gonzaga, the 6-foot-11, 220-pound Rabb is poised to breakout. In 2015-16, Rabb pocketed a robust 17.5 points and 11.9 rebounds per 40 minutes and will see a wealth of touches on the offensive end this season. However, transfers Grant Mullins (Columbia) and Don Coleman (JuCo) must create enough offense from the perimeter for the Golden Bears to entrench themselves as a top-25 unit and give Rabb a legitimate chance at the trophy.

Monte Morris shows his athleticism with a great transition finish around the rim. pic.twitter.com/4oEwKBqi4V

Following the departure of now-Indiana Pacers’ forward Georges Niang, Morris steps into the role of the Cyclones’ primary scorer. A campaign ago, Niang accounted for nearly a fourth of the team’s average scoring output (82 points per game). Although Morris manufactured a crisp 13.8 points, 6.9 assists and 3.8 rebounds each contest, those stats should see an uptick in his senior season.

Additionally, the 6-foot-2, 170-pound senior will continue to hover around the same amount of dimes alongside a sound group of shooters, led by Matt Thomas. Nevertheless, Iowa State placed No. 175 in team defense efficiency in 2015-16. If Morris and Co. are unable to improve on that end of the floor, he’ll struggle to emerge as a contender for the honor.

Fultz is only a freshman, but don’t fret. He’s about to usher in a storm towards the northwest. In the 2016 FIBA U18 Americas Championship, the No. 1 combo guard of the 2016 recruiting class on 247 Sports lit up the scoreboard, especially versus Canada in the title game. The 6-foot-4, 170-pounder notched 23 points, five rebounds and five assists in just 21 minutes. Plus, he accumulated 3.2 steals per contest during the tournament.

Hence, Fultz boasts a dominant all-around game that could propel him to the No. 1 overall pick in the 2017 NBA Draft. If the Huskies are unable to snatch a ticket into March Madness though, his hopes for the award could dwindle. Ben Simmons and Henry Ellenson are a prime examples, leaving an appearance in the NCAA Tournament on the table due to an inconsistent supporting cast.

The 2016-17 #BIGEASThoops Preseason Player of the Year…

Hart possesses the same height and weight as the final player on this list, but the Wildcats’ guard delivers an extra edge on the glass. In his junior season, Hart accumulated 15.5 points and 6.8 rebounds per game, topping 6-foot-11 Daniel Ochefu’s rebounding total (6.6). Those numbers won’t see a dramatic increase, considering head coach Jay Wright’s bunch expects to exhibit a fairly balanced attack.

However, what makes him ultra-valuable is his role in Villanova’s suffocating 1-2-2 zone press. Hart plays the role of a safety, attempting to aid his teammates, who are putting pressure on the opponent in the backcourt. If the Wildcats fail to force a turnover, he’s still athletic enough to guard a point guard or even a power forward. His two-way abilities should put him right in the conversation for the award.

Yet Allen decided on navigating a similar route to Hield’s, who stuck around for his senior campaign after producing 17.4 points per contest as junior. While incoming freshmen Harry Giles III, Jayson Tatum, Marques Bolden and Frank Jackson will push him for shots, the Blue Devils’ guard could add the distributor role to his resume in 2016-17. Likewise, he’ll easily find a way to chip in roughly 20 points a night.