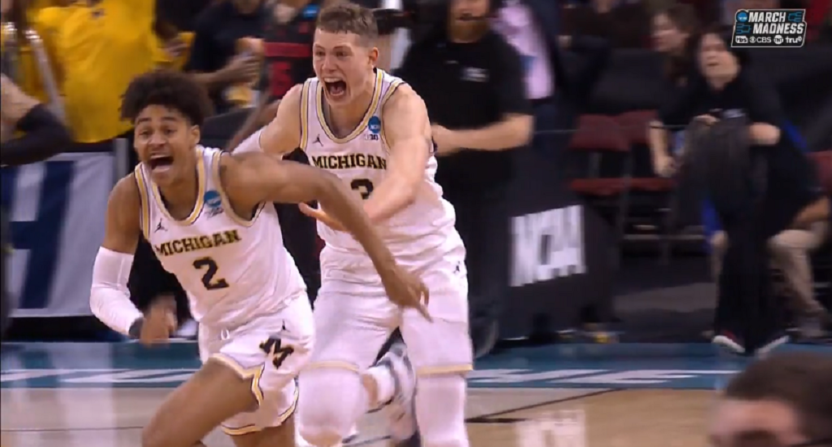 It’s very difficult to rank the top moments of the 2018 NCAA Tournament (so far), as there have been so many amazing moments that could be included. But we’re going to try anyway, and we’ll do so thanks to videos easily acquired via the Clippit app.

Clippit is an awesome app that allows us to quickly grab 30-second clips from several live TV broadcasts and share them on social media. Really, it’s incredibly easy to use and a must-have app for your phone or tablet.

The following play isn’t even a hugely meaningful moment or anything, but it’s such a crazy, awesome play that I had to include it. In the first round against Stephen F. Austin Texas Tech freshman guard Zhaire Smith had an alley-oop dunk that should be impossible. Check out this insane 180 alley-oop jam:

Houston Cougars star guard Rob Gray dropped 39 points on San Diego State in the first round, and two of those points came on this acrobatic layup that would serve as the game-winner:

8. The Duke-Kansas Elite Eight game was everything we hoped for

Well, unless you’re a Duke fan. The finish featured a few misses from Duke’s Grayson Allen, something that pleased most viewers. Like this shot to end regulation and send the game into overtime:

Malik Newman hit this key three with under two minutes to go in overtime to help Kansas come away with an 85-81 victory:

7. Villanova shows why they’re the team to beat

The Villanova Wildcats put their power and athleticism on full display in their Sweet 16 victory over West Virginia, particularly in this RIDICULOUS sequence from freshman Omari Spellman. Also, awesome calls as always from Ian Eagle here:

6. Nevada erases 22-point deficit — with under 12 minutes to go — to beat Cincinnati and advance to the Sweet 16

The Nevada Wolfpack closed the game out on an incredible 32-8 run to pull of a stunning comeback victory. Here were their game-tying and game-winning buckets in the final minute:

5. Clayton Custer sinks Tennessee in the second round

We could’ve just had an entire post on Loyola-Chicago moments (we’re leaving out their thrilling Sweet 16 win over Nevada, for example). In this one, Loyola star guard Clayton Custer hit a highly difficult jumper in the final seconds for the win, to move the Ramblers on to the Sweet 16:

4. Loyola-Chicago advances to the Final Four

Sister Jean and the No. 11 seed Loyola-Chicago Ramblers keep bringing the magic. And while Loyola needed some good fortune to win their first three tournament games by a combined four points, they were in total control in their 78-62 Elite Eight victory over Kansas State.

3. Loyola needed this buzzer-beating three to even survive the first round

The Ramblers didn’t waste much time putting together incredible tournament moments. Loyola trailed Miami in the final seconds of their first round game, when Donte Ingram nailed this three at the buzzer for the win:

The Michigan Wolverines are in the Final Four and favored to advance to the championship game. But it appeared they were going to lose in the second round to Houston. The Wolverines trailed by one with 3.6 seconds left, and had to inbound the ball under their own hoop. They amazingly pulled off with beautiful execution, but it took a crazy three-pointer from freshman Jordan Poole to work. Great call by Brad Nessler here too:

If Michigan wins the national title, we’ll certainly see that highlight much, much more in the future.

Loyola’s amazing run is overshadowing that fact that a 16-seed finally took down a 1-seed, for the first time in NCAA Tournament history. This is the one thing we’ve always wanted to see happen in the NCAA Tournament, and it’s actually happened.

And not just did it happen… the 16-seed won the game in blowout fashion! Against the tournament’s top overall seed, Virginia.

I wouldn’t tell you you’re wrong if you said Loyola should be here (especially if you just combined all of their great moments), or if you said Jordan Poole should be here. But for me, the 16 beating the 1 — and with such dominance — is the tournament’s top moment. And it will go down as one of the top moments in college basketball history.