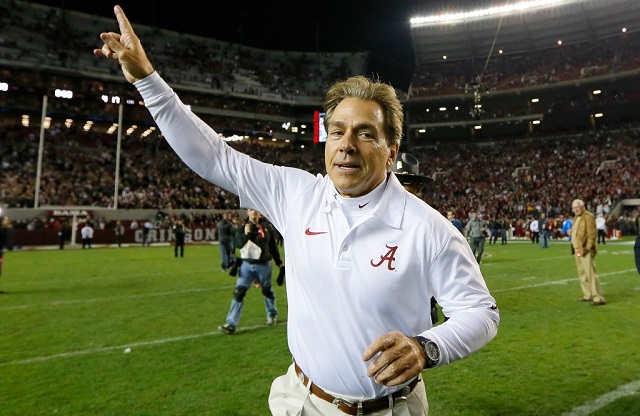 1 Burning Question: Can Nick Saban win back-to-back National Championships for the second time during his tenure at Alabama?

The 2016 season will be a tougher road for Alabama to the National Championship than it was in 2015. Alabama is used to losing key talents to the NFL, and this year was no different. The Tide had seven players drafted in the 2016 NFL Draft, with all of them going in the first three rounds. On offense, they lost Heisman Trophy winner Derrick Henry, his backfield mate Kenyan Drake, and their center Ryan Kelly. On defense, they lost Reggie Ragland, Cyrus Jones, A’Shawn Robinson, and Jarran Reed. In addition to those losses, they also lost their starting quarterback, Jake Coker. As usual, Alabama has a lot to replace, and as usual, the Tide has a lot left in the cupboard.

As we post this preview, the Tide has yet to choose a starting QB for week one against the USC Trojans. Freshman Jalen Hurt’s stock has been rising, but Cooper Bateman and Blake Barnett are also in the mix. The good news for the starting QB is that he has some real talent to catch the ball for him. O.J. Howard, Calvin Ridley, ArDarius Stewart, and Robert Foster make up a very formidable receiving corps. Don’t forget about transfer Gehrig Dieter; he was a stud at Bowling Green and will have a big impact for the Tide this season. The running back position is very young, but in the Bama offensive system, they shouldn’t have a problem finding their way.

The defense has some intrigue for 2016. Long-time assistant Kirby Smart (2008-2015 as defensive coordinator) has moved on to Georgia. Smart and Saban had a long standing relationship and they knew what to expect of each other. Enter Jeremy Pruitt. Pruitt is a very accomplished defensive coach despite only being a DC for three years. Pruitt helped Florida State win a National Championship and then moved to Georgia, where he improved the Dawgs’ defense (finishing third in total and scoring defense in 2016, during his second season). Pruitt is no stranger to Alabama (coached for the Tide from 2007-2012), so that will help him ease into his role. There shouldn’t be much change on defense for the Tide in 2016, although it will be something to keep an eye on. Pruitt inherits talent all over the field. Phil Steele has four Bama defenders in his preseason All-SEC first team, with two more on his second team. The talent is here, and the defense will once again be the strength of the Tide. Expect Alabama to continue to have the best defense in the SEC.

27 — This is the number of turnovers the Alabama defense generated in 2015. Alabama finished the season with a +0.67 turnover margin. They generated 19 interceptions and eight fumble recoveries. One basic rule in football is if you win the turnover battle, you usually win the game. The Tide only lost the turnover battle twice last year. One of those was a five-turnover game against Ole Miss. Expect the Tide to continue to generate turnovers. The big question is if the Tide takes a step back on offense with all of the youth during Lane Kiffin’s third year as offensive coordinator.

52 — This is the number of sacks by the Alabama defense last season. Alabama brought the pain early and often last season to opposing quarterbacks. They led the nation in total sacks and finished third in sacks per game with 3.47. With their top four leaders in sacks returning (combined for 32.5 sacks) they will continue to cause mayhem in their opponents’ backfields.

Why it matters: Alabama has fallen to Hugh Freeze and the Ole Miss Rebels in consecutive years. The last time that happened was…. never. The 2014 and 2015 victories by Ole Miss marked the first time in history that they beat Alabama in consecutive years. Two times is impressive, three times in a row would be a definite problem.

Why it matters: Alabama has owned Tennessee over the past decade. The Tide has won nine straight in the series. After four years of blowouts, the games are getting closer and closer. The Tide won by 14 in 2014 and then won by only five last season. This is supposed to be the year that the Vols and Butch Jones break through. If the Vols can secure a win over Alabama, it will take them to the next level. Alabama wants to keep the Vols right where they are.

Why it matters: LSU should be Alabama’s biggest competition in the SEC West. Bama has controlled the recent history in this rivalry with five straight wins, but the games in Baton Rouge are always tougher than the ones in Tuscaloosa. Expect this to be a highly competitive game, and based on where it falls on the calendar, it will likely be for all of the marbles in the division.

Defenses beware: Calvin Ridley (@CalvinRidley1) is back and ready to do big things in 2016 #RollTide #51Days pic.twitter.com/1si5KrkIqa

Calvin Ridley, WR – As a freshman, Ridley burst onto the scene and caught 89 balls last year. The impact he had on the Tide offense was immeasurable. Ridley should only grow this year. He will be breaking in a new QB, but I don’t see a big step back in production coming for Ridley.

Damien Harris/Bo Scarbrough, RB – This might be the biggest question mark for Alabama because of what they lost at running back. They lose the Heisman Trophy winner — and his 2,200 yards — and the dynamic Kenyan Drake. There is a lot of pressure on the backfield, but between these two, they will be able to fill the role quite admirably.

Eddie Jackson, S – Jackson turned out to be a natural fit at safety last season. He finished the year with six interceptions, including a crucial one in the National Championship Game. Jackson will lead the secondary, and with the incredible pass rush that the Tide will have, he’s probably licking his lips thinking of the plays he will be able to make this year.

Reuben Foster,  LB – Foster is not only a great player on the gridiron, but will also be the field general. He made great strides from 2014 to 2015. Expect the same in 2016, as he develops into one of the best defensive players in the country.

5. The Alabama defense will led the nation in sacks per game

Everywhere you look on the Alabama defense is talent galore. The defensive front looks to be the best in the nation. Only Penn State and Arizona State (and by the slightest of margins) had more sacks per game than Alabama in 2015. That will change in 2016, as the Tide will keep constant pressure on opposing quarterbacks in 2016.

4. Calvin Ridley, ArDarius Stewart, and Gehrig Dieter will be the best trio of receivers in the SEC

This Bama trio of receivers is uber-talented, and we aren’t even including star tight end O.J. Howard in the mix. The statistics they put up will be questionable because of the introduction of a new quarterback and the likelihood that Bama will rely on the run game early in the season. Despite statistics maybe taking a dip, this trio of receivers will be a force to be reckoned with in the SEC. The new QB is stepping into a very good situation, and as the season progresses, he will use his weapons more and more.

3. Damien Harris and Bo Scarbrough will combine for 2,500 rushing yards

The loss of Henry and Drake hurts. There’s no way losing two backs that talented doesn’t hurt any team. The good news? Alabama has talent waiting in the wings. Harris and Scarbrough didn’t get a lot of game action, but they will hit the ground running and will be very successful in 2016. Expect this duo to put up numbers similar to those Henry and T.J. Yeldon put up in 2015, but the yardage totals will be better.

Where this game falls on the schedule is problematic for Alabama. Alabama will have their defense hitting on all cylinders by this game, but the offense may be another story. If this game was later in the season, I would give it to the Tide. Where it falls makes me think that Hugh Freeze and the Rebels will win their third straight game against Nick Saban and Alabama. Alabama’s three toughest games this season are all on the road, they will slip up in one of those games, and I predict it will be the Ole Miss game once again.

1. Alabama will repeat as National Champions

Despite a loss to Ole Miss, Alabama will win the SEC West (and the SEC Championship Game) and go on to the College Football Playoff, where they will once again hoist the trophy. Alabama will win with defense. The talent on this defense is second to none and unless they catch the wrong team at the wrong time, this Alabama team will once again go 14-1 and win the National Championship.