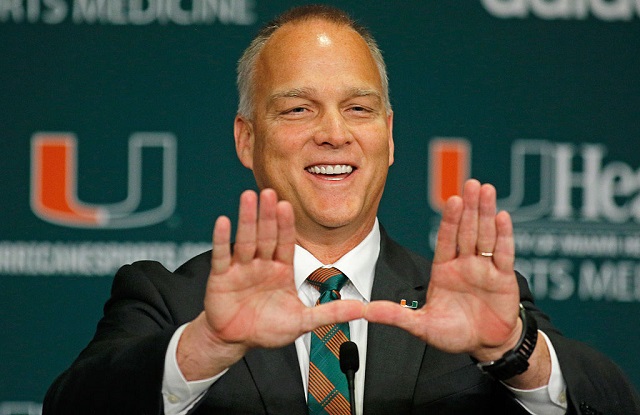 1 Burning Question: Will Mark Richt be the difference at Miami?

When Miami joined the ACC in 2004, it expected to compete for the conference championship every season.

Unfortunately, it hasn’t worked out that way. In fact, the Hurricanes have yet to win a division title, and finished with a losing record in league play four times.

So what went wrong? It certainly wasn’t a lack of talent. Miami’s roster has been loaded with next-level players for over a decade. In fact, heading into the 2015 season, 37 former Hurricanes were on NFL rosters. That total was second to only LSU, which had 40.

Despite having all of this talent, UM failed to win a championship. While Al Golden isn’t necessarily a bad coach, he definitely wasn’t the right guy to turn things around at the U.

Mark Richt is. In 15 seasons at Georgia, he compiled an overall record of 145-51 (.740) with eight top-10 finishes and two SEC championships. He inherited an UGA program that simply couldn’t win the big one (sound familiar?) and guided it to a conference title in his second season.

Can he work similar magic at Miami in his first year?

There are plenty of reasons to think so. Brad Kaaya returns at quarterback after a stellar sophomore campaign in which he threw for 3,238 yards with an impressive 16/5 TD-to-INT ratio. He’ll be protected by a veteran offensive line that welcomes back six players who have combined for 81 career starts.

The Canes return a lot of proven talent at the skill positions, also. Joe Yearby — who became just the ninth player in school history to rush for over 1,000 yards — is back, as is Mark Walton, who led the team with nine rushing touchdowns last year. Slot back Stacy Coley (47 catches, 689 yards) and tight end David Njoku (21 catches, 362 yards, 17.24 ypc) return this fall after leading the team in receptions per game and yards per catch, respectively, last season. Yearby (23 catches, 273 yards) and Walton (22 catches, 293 yards) should also be heavily involved in the passing game this fall.

Defensively, the Hurricanes have a wealth of experience coming back. Cornerback Corn Elder and Rayshawn Jenkins will anchor the ‘Canes secondary, which ranked fourth in the ACC interceptions last season. The linebacking corps remains virtually intact this year, welcoming back Jermaine Grace and Juwan Young, who finished 1-2 in tackles in 2016.

Miami’s defensive line will be one the most improved units in the nation this year. Craig Kuligowski will coach the ‘Canes defensive line this season after producing 24 all-conference players in 15 years at Missouri. Under his leadership, defensive ends Al-Quadin Muhammad (8.5 TFL, 5 sacks) and Trent Harris (5 TFL, 3.5 sacks), will be even more dangerous this fall.

2.84 – This was Miami’s average yards per carry in conference play last season. The Hurricanes weren’t able to run the ball against ACC foes last year, averaging just 91.88 yards per game. They were particularly ineffective inside the red zone, rushing 87 times for 146 yards (1.6 yards per carry). These numbers must improve this season if UM wants to compete for the Coastal Division crown.

7 – The number of times that the ‘Canes won the turnover battle in 2015. Although Miami allowed an average of 404.8 yards per game last year, the team still managed to win ballgames when it was forcing turnovers. The Hurricanes are 10-1 over the past two seasons when recording more takeaways than giveaways. While the defense will be much better this fall (more on that below), UM needs this trend to continue if it is going to make it to the ACC Championship game.

Why it Matters: This is one of college football’s fiercest rivalries. Miami has lost six straight to its archrival, including last year’s heartbreaking defeat, in which the Hurricanes led 24-23 with just over 10 minutes to play. If Miami is going to become “The U” again, it needs to get a victory in this contest to turn the tide.

Why it Matters: Regardless of what happens against Florida State, this game is the most important one of the 2016 campaign. The Tar Heels are the favorite to win the Coastal Division again this season, returning seven starters from a stellar offense that led the nation in yards per play (7.28) last year. UM must win this contest to reach its first ACC title game.

Why it Matters: This is the toughest conference road game that the ‘Canes will play this season. Although the Hokies have finished in the middle of the pack the past few years, they’ll be one of the most improved teams in the country under the leadership of Justin Fuente. If Miami wins either or both of the games above, a victory over Virginia Tech would put them in the driver’s seat in the Coastal Division. On the other hand, if the ‘Canes enter this contest on a two-game losing streak, a victory would prevent the season from spiraling out of control. Either way, they need a “W” in this contest.

Brad Kaaya, QB – A third-team All-ACC performer last year, Kaaya was the leader of the Hurricanes’ offense. He had an outstanding sophomore season, completing 238 of 389 passes for 3,238 yards and 16 touchdowns. He also did a great job of protecting the football, throwing an ACC-low five interceptions last year. Under the tutelage of Richt — who promised to be more “hands on” in coaching the quarterbacks at Miami — he could be one of the top signal callers in the nation this season.

Joe Yearby, RB – Yearby was the most versatile weapon for the UM offense last season. He led the team in rushing with 1,002 yards, and finished fourth in receiving, catching 23 passes for 273 yards. Look for Richt to use him as both a runner and a receiver this fall, much like he did with Knowshon Moreno, Todd Gurley, and — forgive me, ‘Canes fans — Warrick Dunn.

Corn Elder, CB/KR – The person who scored Miami’s most memorable touchdown of 2015, Elder did a little bit of everything for UM last year. He excelled in pass coverage, leading the team in passes defensed (13). However, he also did well against the run (36 tackles, 4 TFL) and as a pass rusher (two sacks). He’ll be the top playmaker in the ‘Canes secondary again this season.

Al-Quadin Muhammad, DE – Muhammad was the most disruptive defensive player for Miami last year. He was outstanding in all facets of the game, leading the team in tackles for a loss (8.5) and sacks (5), while finishing third with 54 tackles. He’ll be a key player for the ‘Cane run defense as it tries improve upon last year’s 5.26 yards per carry.

5. The Hurricanes’ average yards per carry increases by a full yard this season

As noted earlier in the key stats portion of the preview, Miami only averaged 2.8 yards per carry in conference play last year. That will change under the leadership of new offensive line coach Stacy Searels, who former Georgia Bulldogs standout David Pollack said, “was hands down the best coach I ever played against.” He will help mold the ‘Canes’ offensive line — which returns six players with starting experience — into one of the better units in the ACC.

4. Miami will finish in the Top 5 in the ACC in total defense

The Hurricanes finished 11th in the league in total defense last year. However, the team managed to go 8-5 last season because the UM defense forced 25 turnovers, which ranked third in the conference. Under Manny Diaz’s more aggressive scheme, the Hurricanes will produce more turnovers and negative plays than it did a year ago. As a result, the overall yardage numbers will be much lower.

Since he was an honorable mention all-conference selection a year ago, this doesn’t seem like that bold of a pick. However, most of the league’s top backs return this fall, including Dalvin Cook, Elijah Hood, Wayne Gallman, Qadree Ollison, and 2014 ACC Player of the Year James Conner. Yearby will outshine them all under Mark Richt’s system, which has cranked out productive running backs over the years. Expect him to put up even bigger numbers running behind a much-improved offensive line.

Make no mistake about it: Richt will succeed at Miami right away. He inherits a talented team and hired an extremely talented coaching staff. He will win this award because…

1. Miami will win the Coastal Division

Thanks to an all-star coaching staff, improvement on both lines, and an aggressive defense, the Hurricanes will win the division championship and play in the ACC Championship Game.